Designer Cindy Murriagi reveals the inspiration behind the interiors of Theory, as featured in an exclusive article for Luxury Card Magazine written by US journalist Kathryn Romeyn

Seven months after the launch of our latest Relais & Chateaux luxury yacht, Theory, sister ship to Origin, Ecoventura interior designer Cindy Murriagi has featured in Luxury Card Magazine to discuss the inspiration behind the Theory’s design and how she has captured the Galapagos spirit in the interior décor. As Luxury Card journalist Kathryn Romeyn notes, visionary designers and architects are taking pivotal concept cues from outside the cruise industry to offer passengers a new wave of on board innovations.

‘It’s a new age on the high seas for cruising’, writes Kathryn Romeyn, ‘with innovations in ship design and avant-garde, immersive experiences aboard.’ Luxury yacht design has moved towards creating super upmarket luxury hotels, but on water. ‘The bolder approach du jour stretches well beyond staid notions of boundaries expected at sea, sometimes even surpassing what’s done on land.’ 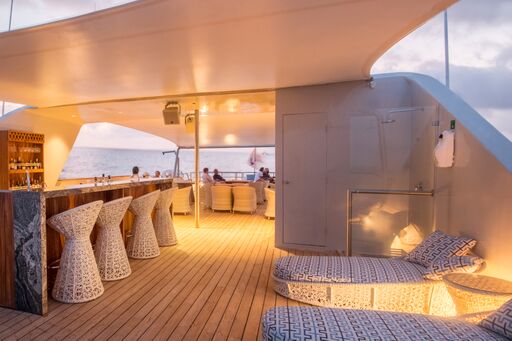 So what does this mean when it comes to designing a new, super luxury mega yacht? ‘Brands are thinking outside the box to captivate guests, with creative teams cracking open the possibilities’ writes Kathryn. The attention to detail and emphasis on context have come to the fore, whether putting together ‘fantastical visions on a grand scale or making nuanced edits to seamlessly marry a vessel to its environment.’

Kathryn spoke to Cindy to understand the concept behind Theory and Ecoventura. ‘Named for Darwin’s groundbreaking work’, she writes, ‘Theory launched in March from a sustainable cruising leader, Ecoventura. The 142 foot megayacht is essentially a floating boutique hotel, sleeping just 20 guests in ten white staterooms.’

The article soon moves on to the inspiration for Theory’s stunning interiors. ‘”The beauty is outside in the Galapagos Islands – you don’t want to take away from that”, says Ecuadorian designer Cindy Murriagi of her simple, un-distracting approach. Giant windows abound (even in the spacious showers) and the palette virtually disappears into the surroundings: silver matches the sparkle of the Pacific sea as the sun rises and falls, and blues blend in midday. 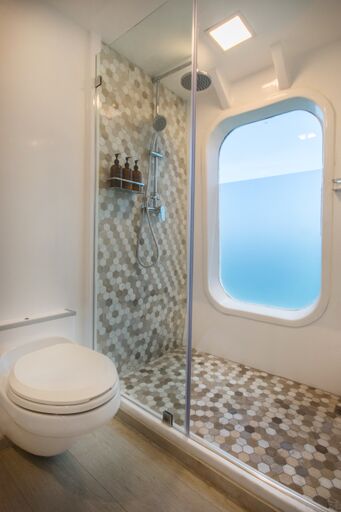 “The truth is it was all my imaginations,” says Murriagi. “When I imagined to be in Galapagos, luxury without being too stuffy, something that would remain in time.”

As the core of the Ecoventura ethos is operating eco-friendly vessels with features such as Theory’s ecological toilets, advanced water treatments systems, biodegradable toiletries and state of the art bow design alongside top-shelf amenities and interiors. Whilst most Galapagos vessels adhere to the national park’s required 1:16 crew to guest ratio, it’s 1:10 aboard Theory, plus two experienced naturalists, on each voyage.

Materials used on board include exotic stones and crystals and petrified teak. In the lounge where geography and photography lectures are held, the ceiling is hand painted to mimic solid wood coffers, while gray and white upholstery and leather sofas echo spotted eagle rays and bottle nose dolphins. Agate lamps evoke the archipelago’s lava flows and coffee tables are fashioned with twisted root bases mirroring the distinctive flora. 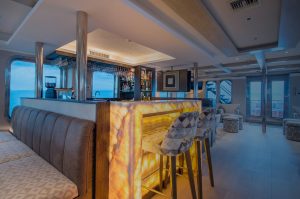 The bar is lit from within and furnished with stools the exact color of the famed blue-footed booby. Most furnishings were made by local Ecuadorian craftsmen and carpenters, including marble nightstands, king-sized beds, armchairs and daybeds in Murriagi’s favourite spot: the hot tub on the sundeck. 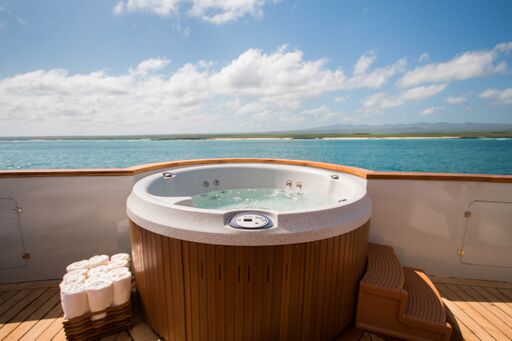 “When you come in from tours at 5pm, it’s like you’re in another world,” she says of sprawling on the chairs and loungers decked in a Sunbrella motif that invokes the red footed booby’s blue-rimmed eyes.”‘

To enjoy the design and comfort of our luxury yachts Theory and Origin, not to mention the food, service, excursions and wildlife that make this trip a once-in-a-lifetime opportunity, feel free to get in touch with the team and we will be happy to help: info@galapagosnetwork.com.