Even for those who have not yet managed to visit the world-famous islands of the Galapagos, there is enough information about them swirling in the ether to give us the impression that we know them well. Much like a celebrity, over time, stories of their fabled giant tortoises, marine and land iguanas and multi-colored boobies, as well as tales of Darwinian expeditions that revealed to us all how we became who we are today, have found their way into the pages of books and magazines with enough frequency that it has become a place that feels familiar.

And though there is a great tapestry of little facts that help create this feeling, most of them are recycled and repeated over and over again. But if you look a little closer and if you dig a little deeper, there is a veritable treasure trove of lesser-known titbits that date back to the island’s earliest visitors.

We thought it would be fun to dig up a few that focus on other aspects of the islands’ lore and history that you might not yet have stumbled upon.

Over time, the Galapagos has had many names, including Archipelago del Ecuador and Enchanted Islands. The most famous, of course – and the one that stuck – came from “Insulae de los Galopegos”, which means Islands of the Saddlebacks. The islands were named after the eponymous tortoises that littered the islands, which in turn were named, due to their likeness, after a popular saddle known as a Galapago that was in use at the time of the earliest explorers of the islands. 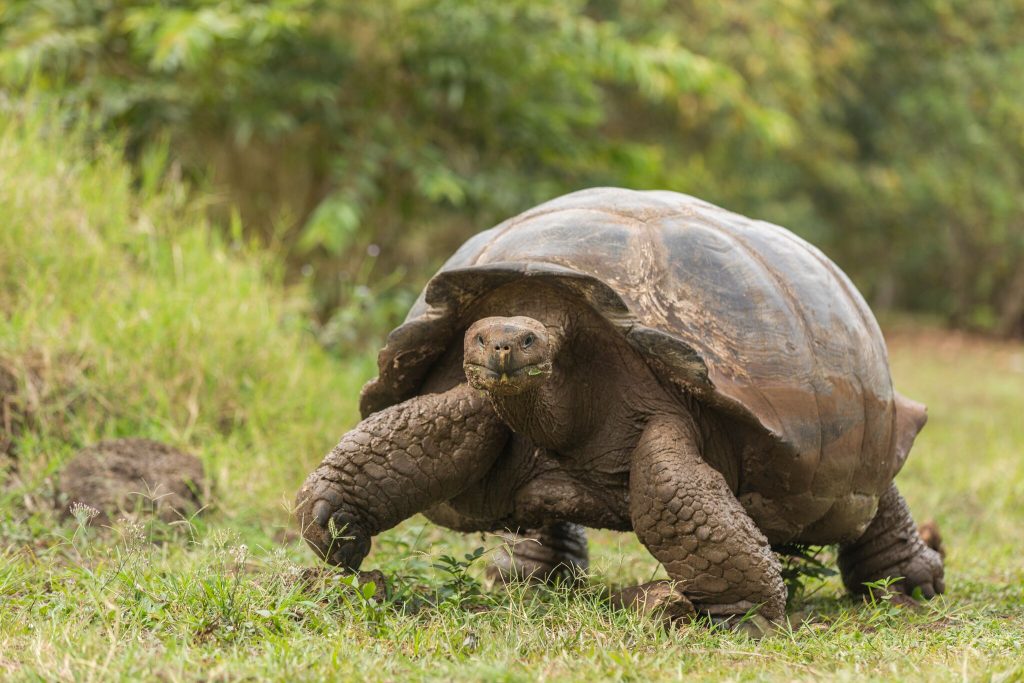 That name was landed on by a Flemish cartographer who wanted to include them in the latest edition of his world atlas towards the end of the 16th Century. Like a fine piece of evolution in and of itself, this morphed into Islas Galápagos, though the official name remains Archipiélago de Colón. But the man who first discovered the islands went for something different altogether.

Tomás de Berlanga, the then Bishop of Panama, stumbled across the Galapagos when his ship strayed off course on a trip to Peru, making landfall on the 10th of March 1535. His named for the archipelago was the Enchanted Islands due to the morning mist that can, when the light is right, give the impression that the islands have disappeared. Unfortunately, his tune soon changed when he decided that the islands – many of which are made of barren volcanic rock with little fresh water – were inhospitable!

Not entirely true, of course. Though he was the first human to set foot there, the terrestrial animals that populated the harsh volcanic lands had been there for much longer, having themselves also travelled from the South American mainland. The ones that could, swam, while the others clung to palm leaves and tree trunks as they were swept from the mouths of rivers into the ocean currents. The world’s very first surfers. 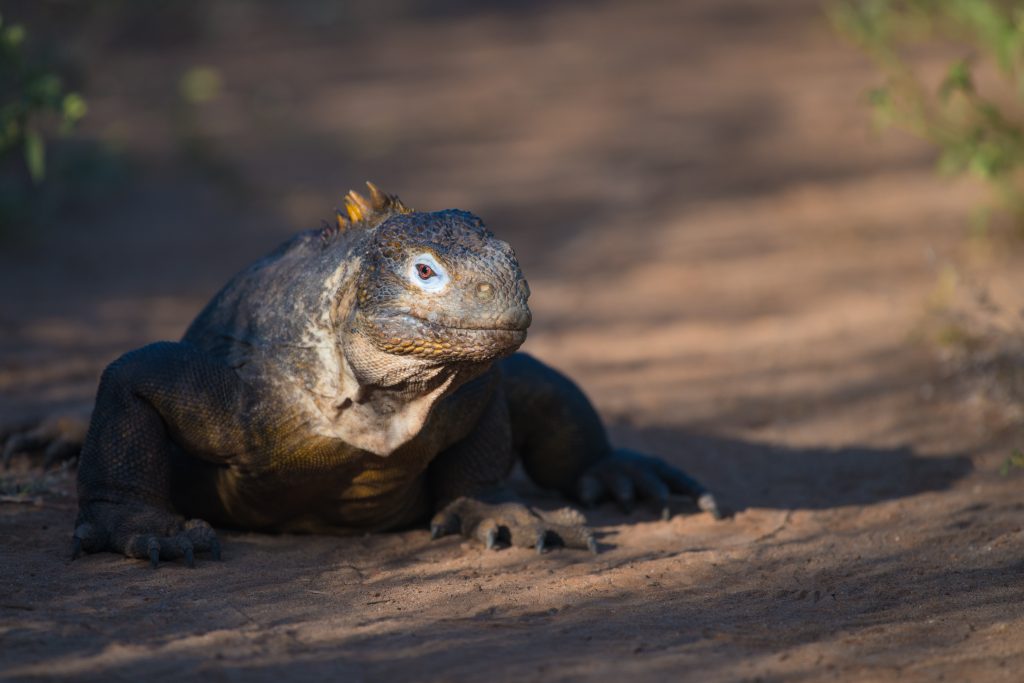 Although 97% of its land mass is a protected national park, there are nearly 30,000 locals who live permanently on Galapagos, spreading themselves across 5 of the 13 main islands. Like all things in life, however, it started off with just one – an Irish sailor by the name of Patrick Watkins, who found himself marooned on Floreana between 1807 and 1809, thus making him the first official resident.

Patrick survived by hunting the local wildlife and growing his own vegetables, which in turn he traded with whalers and passing merchant ships for large consignments of rum to help him pass the time. What a sensible chap.

Ahoy There, Me Hearties!

During the 17th Century, the islands became a strategic hideout for pirates, mostly funded by the French, Dutch and British governments, who were desperately trying to drain the seemingly endless resources of the Spanish Empire.

The pirates would use the Galapagos as a springboard from which to launch attacks on unsuspecting vessels that passed too close, while also providing them with a wide variety of food to feast on while they waited. They favored the giant tortoises as their main source of protein, as not only were they enormous and easy to catch, but also had the courtesy of laying hundreds of eggs at a time for those who preferred a fluffy omelet to something a little more medium-rare.

Oil from the tortoises’ muscles was also used instead of butter before another use was found for it as an anti-aging cream in certain lines of cosmetics. If only Blackbeard had known, perhaps he would have found the time to shave!

Thankfully, the giant tortoises that roam the islands are now protected, and best seen on a trip to the Charles Darwin Research Station and tortoise sanctuary of Rancho Primicias in the hills of Santa Cruz. Signs of pirate life are still visible, with graffiti scrawled on the cliff faces near Tagus Cove.

A whale of a time

Until Edison had his lightbulb moment in 1879, alas things only got worse for the local animal population. The whaling industry, spearheaded by the British company Samuel Enderby & Sons, had fished the Atlantic whale population to the brink of extinction and so decided to send their favorite Ahab, a man called James Shields, to go and explore the Pacific as an alternative. 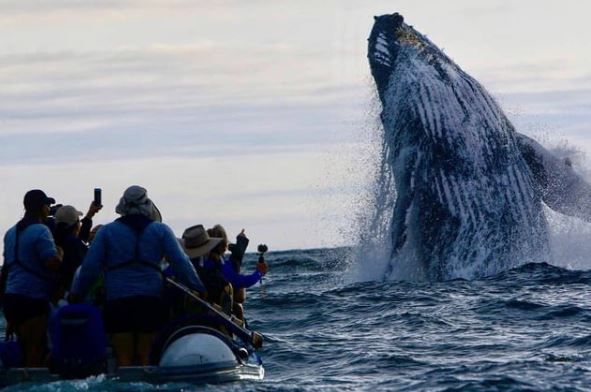 It didn’t take him long to zero in on the Galapagos as a bit of a gold mine. The whales were drawn to its warm waters for breeding, as well as the bountiful deep-sea feeding areas to the west of the islands, and he was soon on his way home with no fewer than 140 tons of whale oil, which, once boiled, what was used to artificially light much of the western world at the time.

Luckily for the whales, however, while Edison was still crawling around in his nappies, a Canadian scientist, Abraham Gesner, had just figured out a way to distil kerosene from petroleum. In time, this discovery helped reduce demand for whale oil, going some way to saving the species – particularly humpback, sperm and right whales – from a fate similar to the dodo.

In the early 20th Century, the islands played host to a murder mystery so juicy it later became a documentary voiced by none other than the Oscar winning actress, Cate Blanchett. 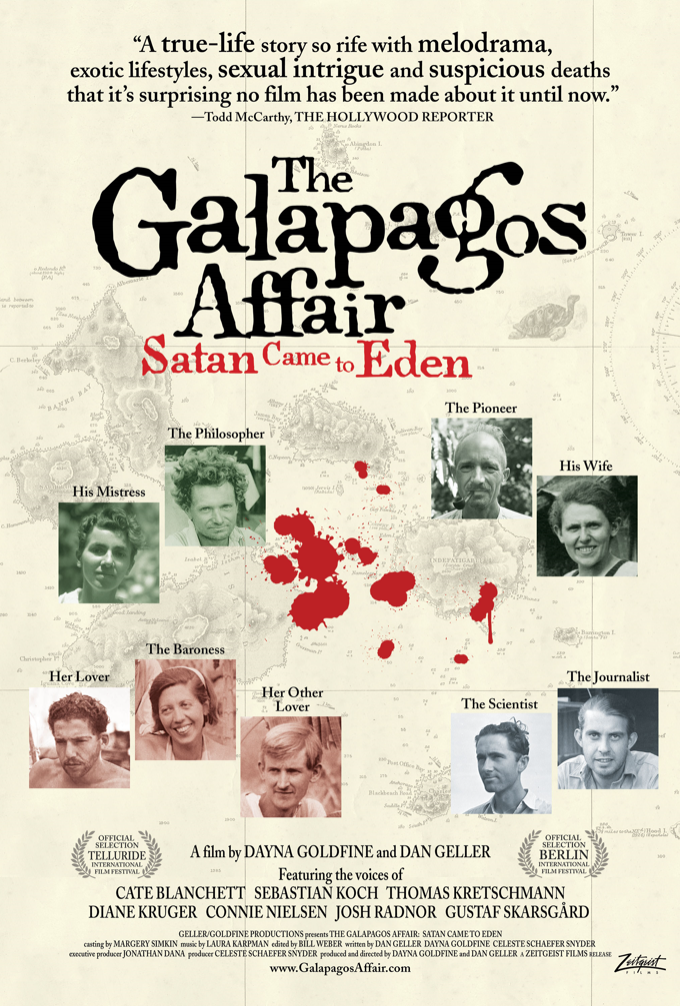 It all started in 1929. A German doctor by the name of Freidrich Ritter had had enough of his dreary life in Frankfurt, and so decided to flee, taking one of his patients, Dore Strauch, with him (willingly, we should add, although they both left spouses behind). Seeking out adventure, they arrived in the Galapagos several months later, where they settled on Floreana Island.

In time, the couple were followed by other intrepid adventurers looking for a new life, including Heinz and Margaret Wittmer.

So now there were four. And while the new neighbors didn’t particularly like each other, the never-ending succession of daily tasks kept them occupied enough that they did manage to more or less coexist without incident, until there were suddenly seven.

The Austrian Baroness Eloise Wehborn de Wagner-Bosquet skipped ashore one day hellbent on showing the world it wasn’t just the Germans who had a monopoly on eccentric living arrangements, arriving, as she did, with not one but two of her lovers in tow (both of whom were, ironically, German as well). And though the jury is out as to whether or not she was actually a Baroness, one thing she certainly was, was interesting.

Overnight, the unending monotony of simply trying to keep oneself alive on Floreana was thrown into disarray when Eloise would break from her regular bouts of lovemaking to greet passing vessels in a homemade bikini fashioned from torn rags, replete with a holstered gun and a whip – quite the sight for sailors who would have been stuck on those ships for weeks if not months without a lady in sight.

As you might imagine, her exploits were soon ruffling feathers, particularly when she anointed herself Queen of Floreana and seduced the Governor of the Galapagos. Relationships frayed and matters soon deteriorated as people fell out, with a harsh drought adding to the pressure. 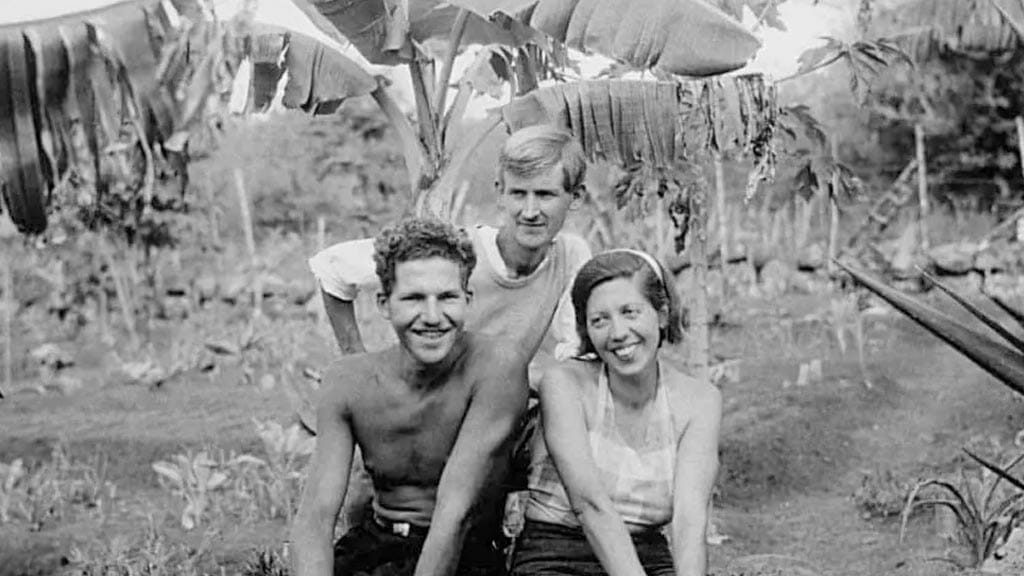 Whether it was enough for one of the band to take matters into their own hands is the million dollar question. But one night it came to a head…

The following morning, the Baroness and one of her two lovers had disappeared – seemingly into thin air, never to be seen again.

Margaret Wittmer claimed that the Baroness and her lover had visited her the previous day, claiming some friends had arrived to take them to Tahiti. Suspicions soon gathered as the story began to fall apart; no-one else had seen a ship arriving that week, and of course the travelers never arrived in Tahiti. What’s more, the couple had left behind all their belongings, including things required for even a short journey.

For her part, Ms. Strauch recalls hearing a loud scream in the night followed by a deathly silence, but could add nothing to help make sense of events

The third of the trio – the Baroness’ second lover called Rudolf Lorenz – was keen to hastily depart the islands, suspiciously so in many people’s eyes. He quickly convinced a fisherman to transport him first to Santa Cruz island, then on to San Cristobal to catch a ship to the mainland.

Several months later there was a final twist in this mysterious tale, as Friedrich Ritter died from food poisoning from some poorly-preserved chicken. An experienced island resident, and largely vegetarian, eyebrows were raised as Dr Ritter would, many surmised, have been more than capable of storing and preserving meat correctly in the island conditions; foul play was suspected with accusations launched towards his lover Dore Strauch.

Over time, the surviving protagonists returned to Europe, the spirit of adventure seemingly fizzling out and the weight of suspicions likely bearing down on the sunny mood of the island. 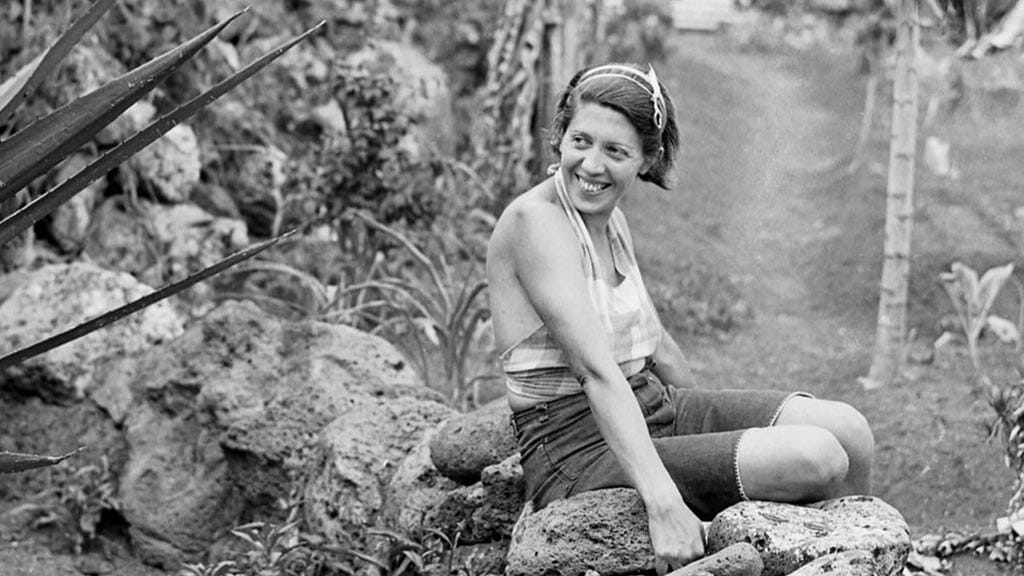 Eventually just the Wittmers remained. They chose to stay, raising a family and starting a hotel, presumably after they realised that they did quite enjoy company after all.

Margaret Wittmer died in 2000, and with her any hope of answers most likely passed too.

To her dying day she maintained that the Baroness and her lover did indeed leave for Tahiti, and also claimed that Strauch had murdered Ritter, stating that Ritter cursed Strauch with his dying words.

For her part, Ms Strauch insisted in a book of her experience on the islands that Lorenz murdered the Baroness and her lover. However, neither could explain the subsequent disappearance of Lorenz himself, and no sign of the Baroness was ever discovered after her disappearance.

So there you have it. These islands the world holds so very dear, both wonderful and vital in equal measure; these islands that have never been more important to the challenges we face today and in the future, near and far; these islands so full of the mysteries of the evolution of this planet we call home.

It turns out they find themselves full of the mysteries of not just the animal kingdom, but humankind, too. All the quirks and the imperfections that we carry along with it. The thirsting for knowledge and wanderlust that inspires us to go looking from time to time. It is all right here in the Galapagos.

So, if you do ever find yourself travelling this way – and feel free to contact the team if the above has piqued your interest – don’t forget to spare a thought for these early pioneers, settlers and explorers who travelled here before us all those many moons ago. Retrace their footsteps by visiting Floreana – visitors can explore the shoreline at Baroness Point, named in honour of the Galapagos’ most vibrant character, by kayak or stand up paddle – and see if they perhaps can help solve the enduring mystery. And for any budding Watkins out there, we’ll provide the rum!