When it comes to the Galapagos, there’s never a dull moment. In one of the world’s most riveting wildlife destinations every day brings an extraordinary sighting.

While land excursions are the modus operandi for many visitors to the archipelago, there’s nothing like being on the water to make the most of the wildlife. Our kayaking and stand-up paddle boarding expeditions provide a completely different angle from which to admire the archipelago’s otherworldly terrain of sunburnt islands characterized by lava rock, untarnished beaches spotted with sea lions, and millennia-old craggy cliffs. It’s also a good excuse to do some exercise and keep active whilst on board. 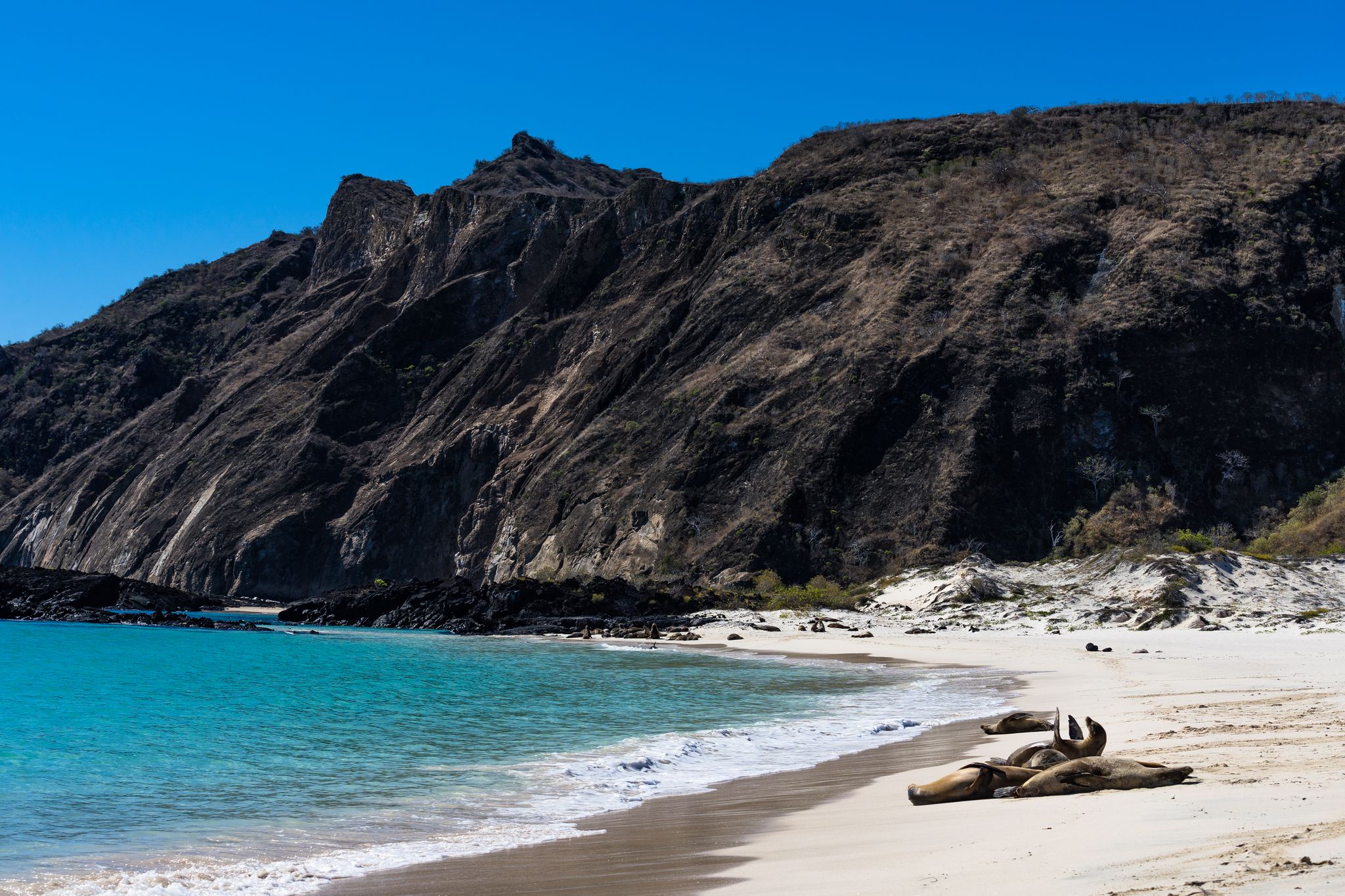 Nudging through the waves, you can discover hidden bays at eye-level while below, the crystal-clear waters reveal kaleidoscopic fish teeming around the reefs. The nutrient-rich waters are home to sea lions who tend to pop their heads up inquisitively at passing kayaks, and bobbing sea turtles that surface like shell islands before disappearing into the blue. Silence prevails save for the calls of birdlife. No motors or sirens, just the sound of your paddle dipping through the water as you explore at your own pace.

Both of our luxury expedition yachts Origin and Theory have five double kayaks and two stand-up paddleboards for guests to use during a voyage, with various outings during each week-long itinerary.

Never seen a kayak or paddleboard before? No problem! Our sit-on-top kayaks are user friendly; stable (easier for getting in and out), spacious and self-bailing with small scupper holes that allow any water to drain right through. Our paddleboards are easy enough for beginners and suitable for all ages – if you’re feeling shaky you can always kneel. But after all, falling in the water is half the fun of it! 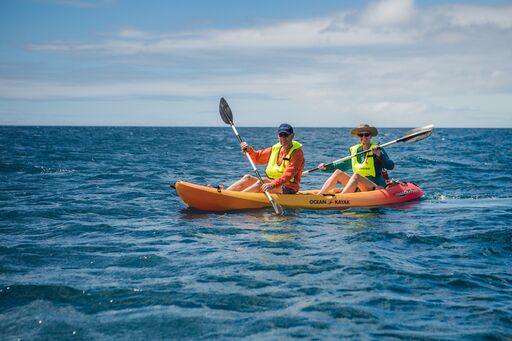 While there are many spots to kayak and paddle board in the area, our guides have their favorites, listed below and all visited by one of our two week-long itineraries.

Approaching Punta Pitt, on the easternmost side of San Cristobal Island, the turquoise waters contrast with the charcoal hues of the volcanic tuff hill, its dramatic shape a result of wind erosion. This is the only place in the Galapagos where you’ll find three species of boobies (red footed, blue-footed and Nazca) nesting in one place – the abundance of food around the island meaning they don’t have to compete. While you can take a two-hour trek, paddling along the coast allows you to admire extraordinary birding spectacles with a unique perspective. Look out for frigatebirds, storm petrels and brown pelicans that reside in the crannies, bushes and steep cliffs that ring the island. Below the surface vivid parrot fish swim through the coral and you may see a sea lion or two on their way to haul themselves onto the olivine sands. 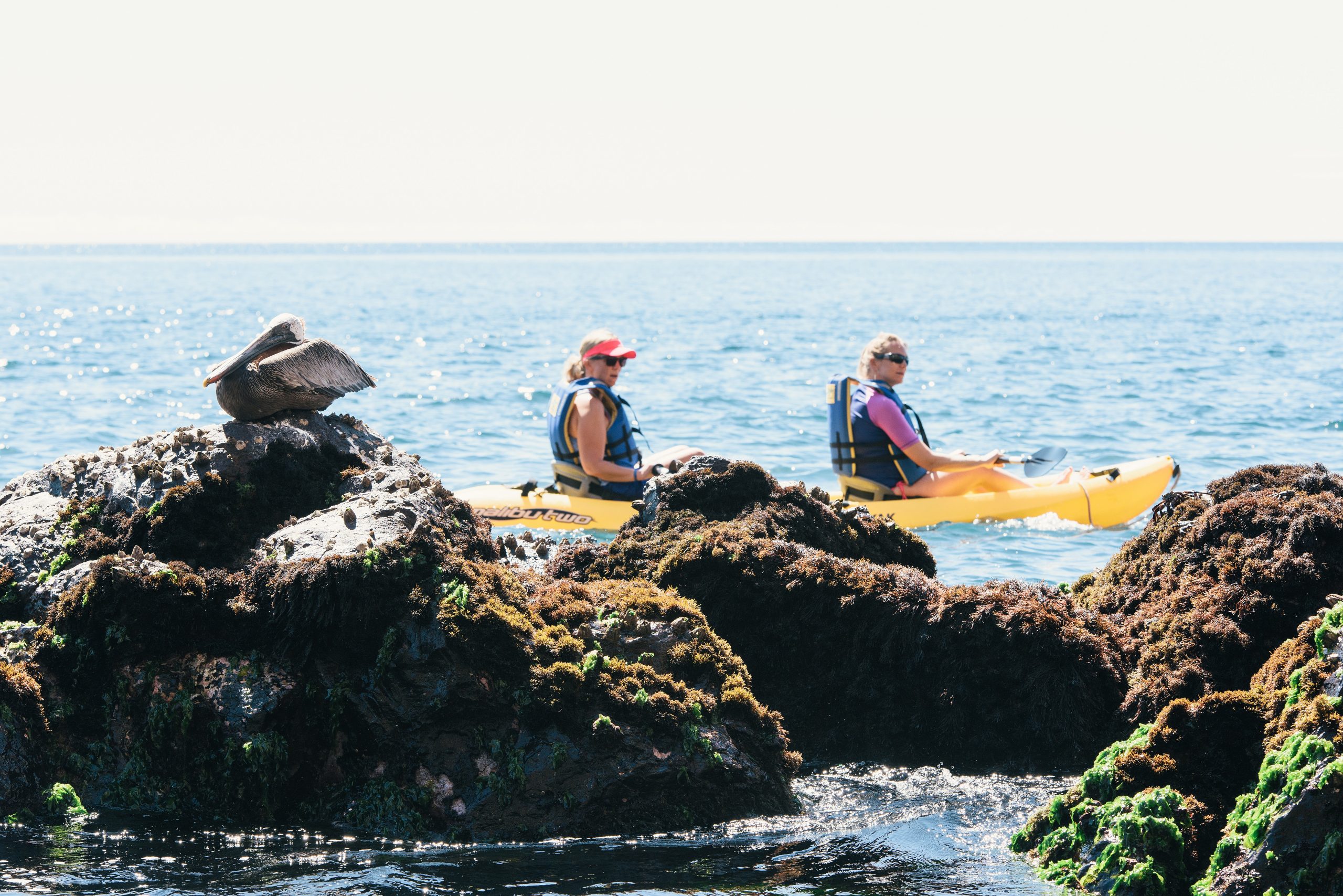 It is thought that Cerro Brujo on San Cristobal’s western side was one of the first places Charles Darwin visited when he arrived in the Galapagos. Given its stunning white-sand beach and iridescent blue water, we would say he chose well. Paddle past troupes of sea lions tumbling and pirouetting acrobatically in the shallows. Great blue herons stalk the rock pools while marine iguanas blend into the volcanic terrain; keep your eyes peeled and you may spot one slip into the water on a search for a meal. Out to sea stands the magnificent Kicker Rock, one of the Galapagos’ most iconic rock formations.

The white-powder sand beach on Gardner Bay, the longest in the Galapagos at 2km, is spectacular for many reasons. This picturesque spot is favored by colonies of sea lions that bask on the dunes of the brilliant shoreline, resting between hunting outings and enjoying the peace and serenity. The only activity comes from the protective patrolling of the dominant males who watch over their harems to keep them safe, all of which can be seen from kayaks off-shore. Meanwhile, under the water, turtles swim through the lapping waves as do angelfish, yellow-tailed surgeon fish and colorful parrot fish – there are plenty of tropical species to see here. 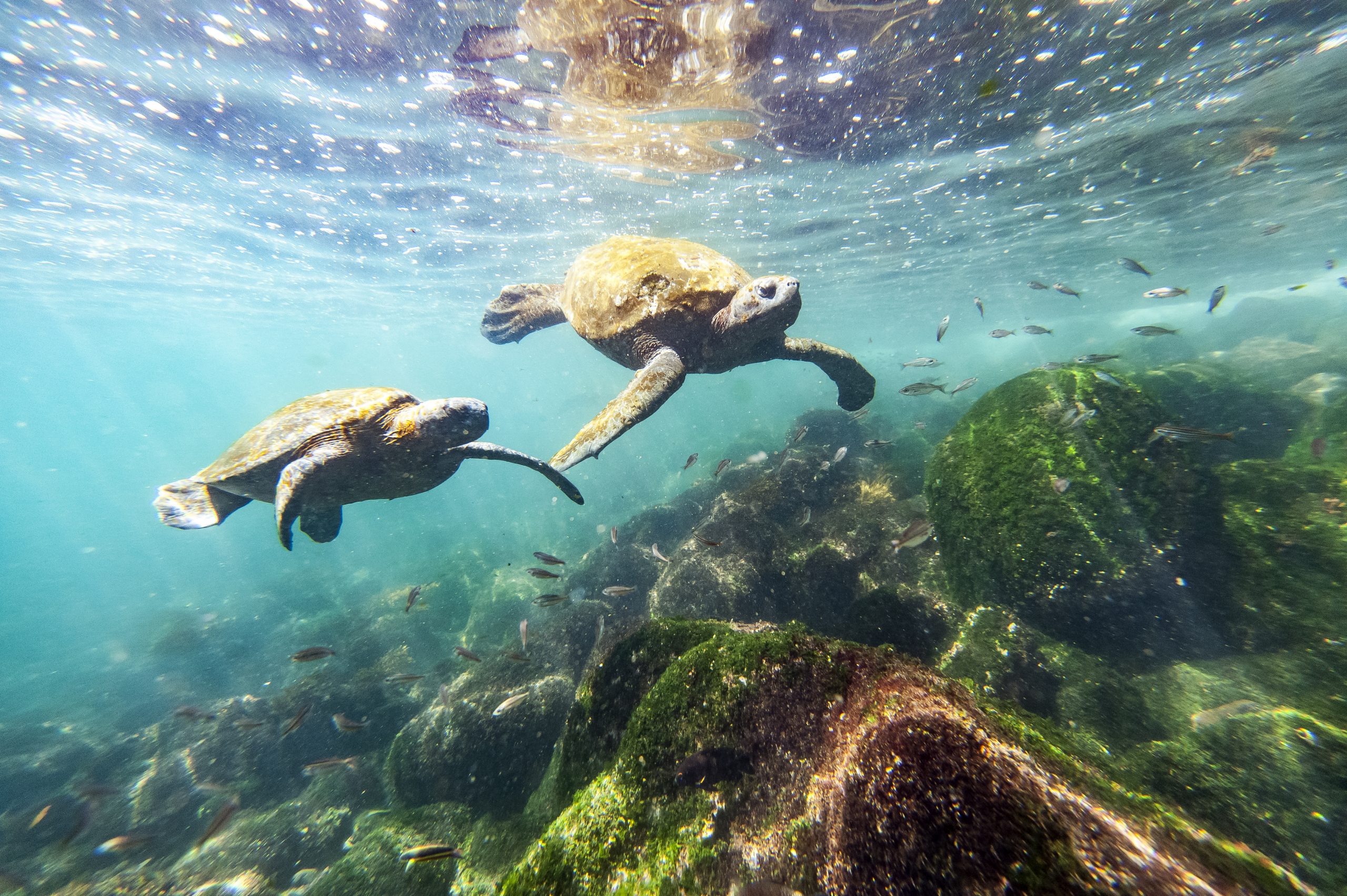 From the water, Baroness Point appears mysterious, decorated with lichen-covered trees – perhaps in homage to the mystery surrounding the baroness and her lover who disappeared on this island in unusual circumstances almost 100 years ago. Beneath the waves a whole other world thrives, full of crustaceans, rays, sea turtles and tropical reef fish oblivious to the intrigue above. While the island’s human residents have long gone, the birdlife is abundant – including the male great frigate birds with their inflated red throat pouches, Galapagos mockingbirds and Darwin’s finches who all make their home here. 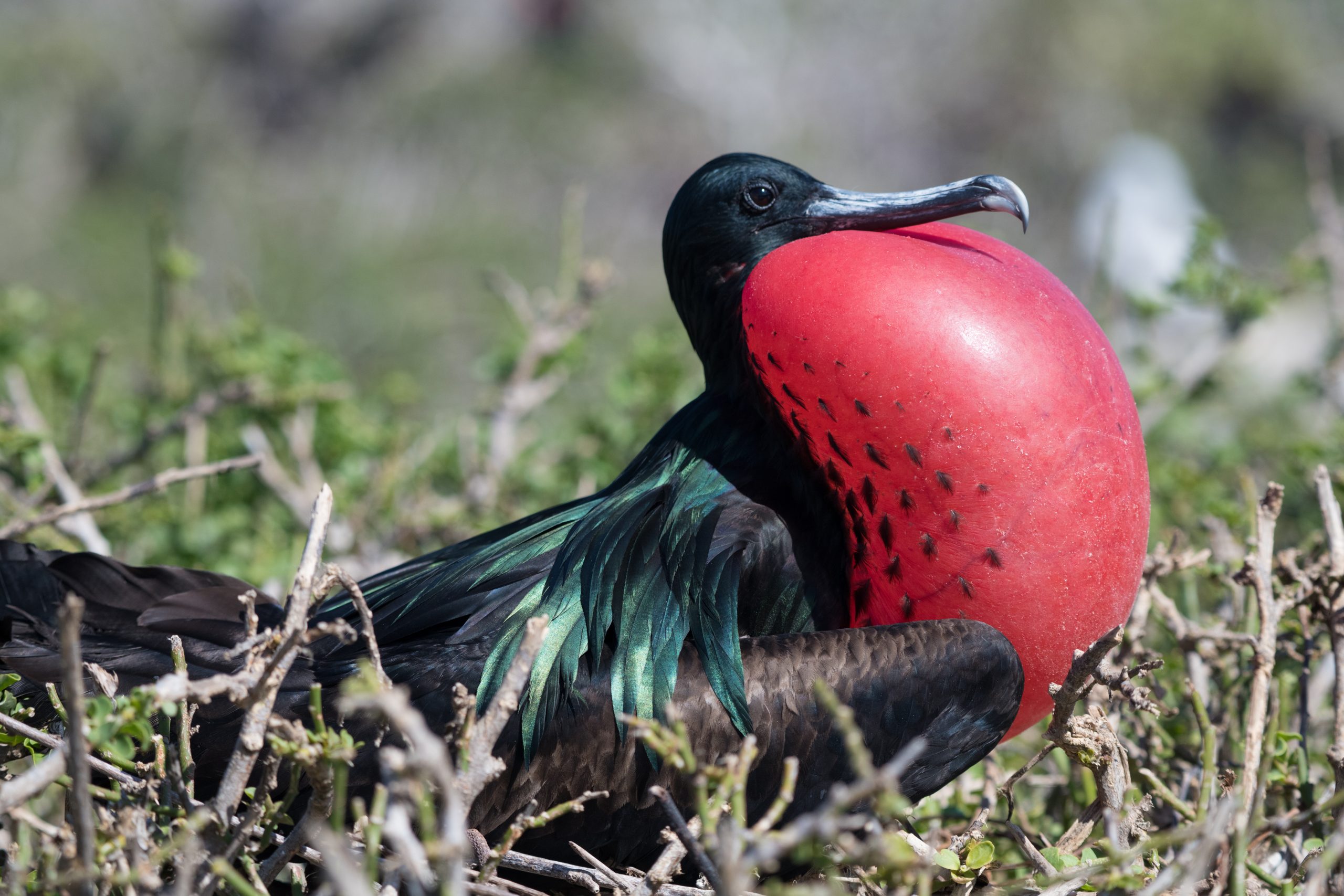 The north-easterly island of Genovesa, or Tower Island as it’s sometimes known, sports yet another of the archipelago’s gorgeous coral sand beaches – there are plenty around the islands – but the most alluring sight is the seabirds in their multitudes as far as the eye can see. Darwin Bay, the result of partially collapsed caldera is the best place to see the riotous rookeries around Prince Philip’s Steps, a steep path that leads into the 25m-high cliffs, and named after Prince Philip who visited in 1965 and 1981. Red-billed tropic birds shelter in the volcanic rock crevices, swallow-tailed gulls and lava gulls, endemic to the Galapagos, congregate near the tidal pools while red-footed boobies and frigate birds shamble around their nests. From a kayak or paddle board, soak up the orchestra of birdsong and the spectacular views of this paradaisical setting.

Tagus Cove on Isabela Island was once a favorite hideout for pirates and whalers who plied their trade in the pacific and sometimes needed a sheltered cove to hide in. Sections of the cliffs are covered in graffiti dating as far back as the 1800s, etched into the rock – the cove is hard to access on foot so kayak is the best way to explore. With the pirates long gone, these days the cove offers safe haven to different species. Flightless cormorants plunge through the water hunting for fish, blue-footed boobies pad around the raw shrubbery and lava herons rest their wings on the rocks. Fearless penguins may approach, while the slightly more suspicious marine iguanas keep to themselves grazing in the algae-rich shallows. 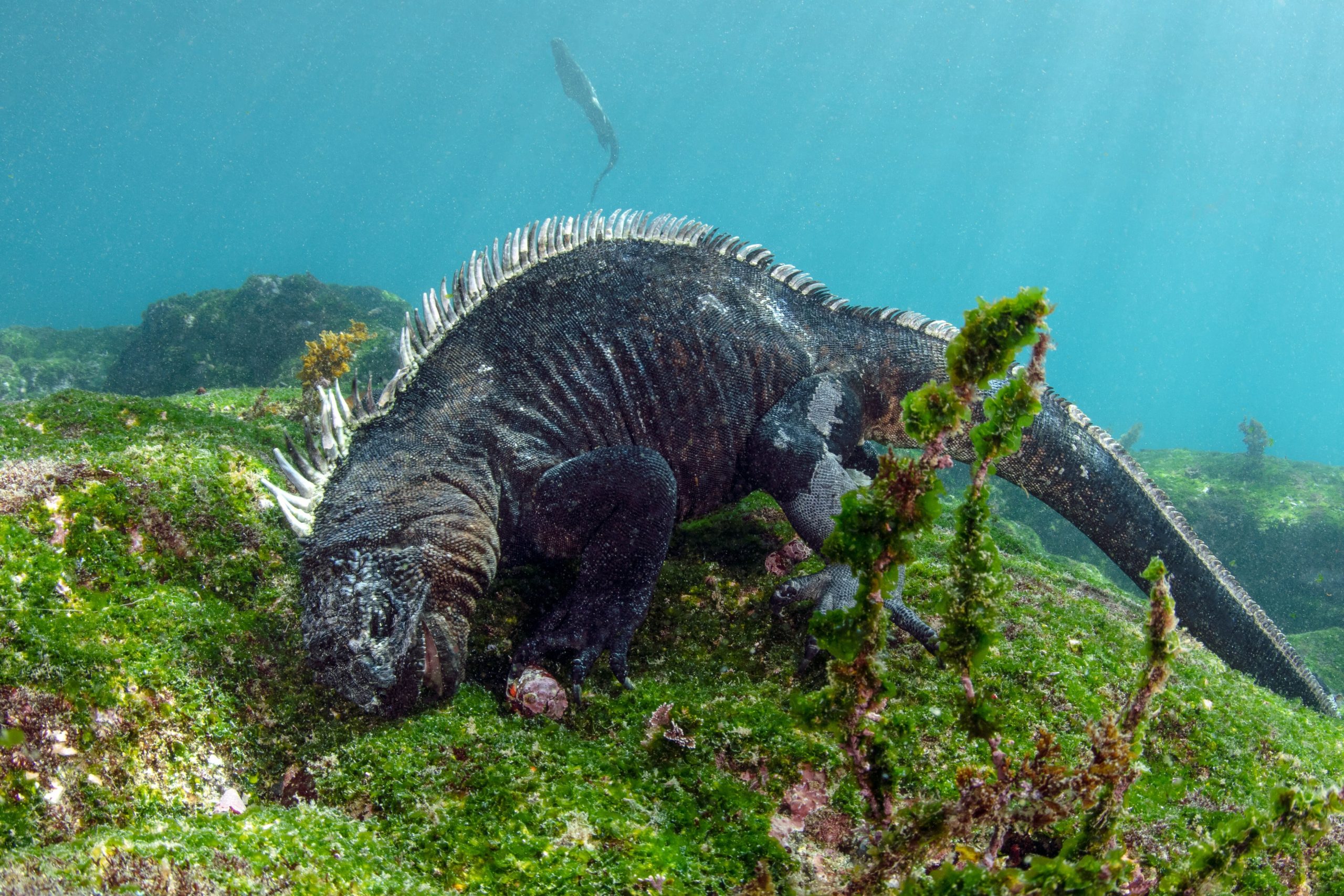 This small, arid island is often considered the geographic centre of the Galapagos, with a diverse range of volcanic rocks and terrain. The lava’s high levels of iron give a distinctive red rust colour to the beaches on the island. The wildlife here is equally spectacular above and below the water. While pink flamingos fly overhead towards the saltwater lagoons, pelicans scour the sea looking to scoop up fish. As you glide through the water, keep your eyes peeled for the silhouettes of silky golden rays and spotted eagle rays as they glide through the waters beneath you. 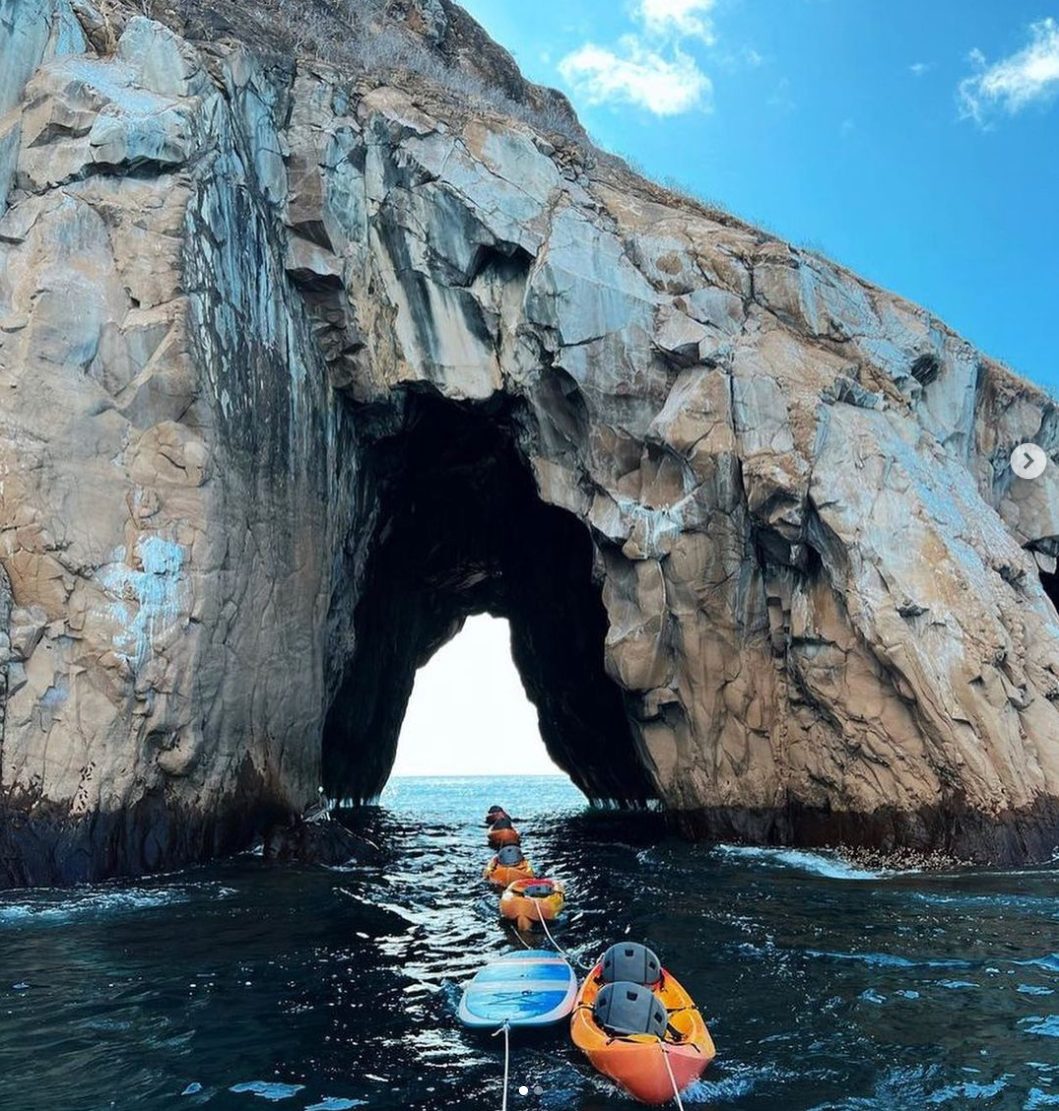 These are just some of the iconic spots that are ideal to explore by water. Kayaking and paddle-boarding are consistently some of our most popular outings, illustrated by these words from a happy passenger who recently explored the Galapagos with us:

“Eventually we made it to Gardner Bay to go for a kayak. We saw plenty of sea turtles and gorgeous views. The water was crystal clear and completely calm, and in the bay were ten female sea lions and pups that would not stop swimming playfully around us.

In the end no matter which route you choose, you’re guaranteed to have a remarkable time, and go home with memories you’ll be telling your friends and family about for years to come.”

If kayaking and stand-up paddle boarding sound inviting, please don’t hesitate to get in touch with the team and we’ll be delighted to help you get on to the water in no time!

From the Galapagos with love