When you travel to the Galapagos Islands with Ecoventura, you will experience a world unlike one you’ve ever experienced before. The Galapagos are one of the only places on Earth where you can catch a glimpse of what life was like before humans.

One of the many perks of travelling to the Galapagos is that there isn’t an off-season when it comes to booking the best time to see local wildlife. Because the Islands are close to the Equator, the water and air temperature do not vary as much as other tropical destinations, making it a perfect sanctuary for Galapagos animals to spend almost all of their time. Read on to find out more about these fascinating locals, and where you are most likely to see them! 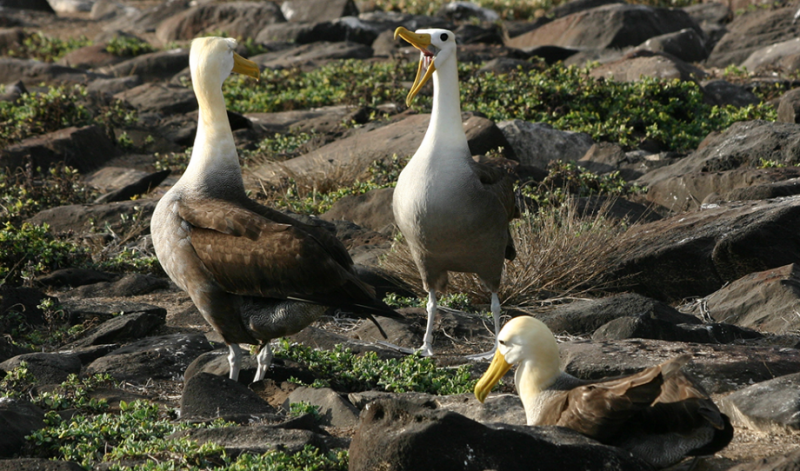 This endangered species of bird is exclusive to the Española Island, the island furthest southeast. One of the only local bird species to have predictable breeding seasons, you are most likely to see them on land from April to January. Offspring will then leave the island when the wind patterns change, and won’t return to Espanola till six years later, whereupon they will start the search for a mate. 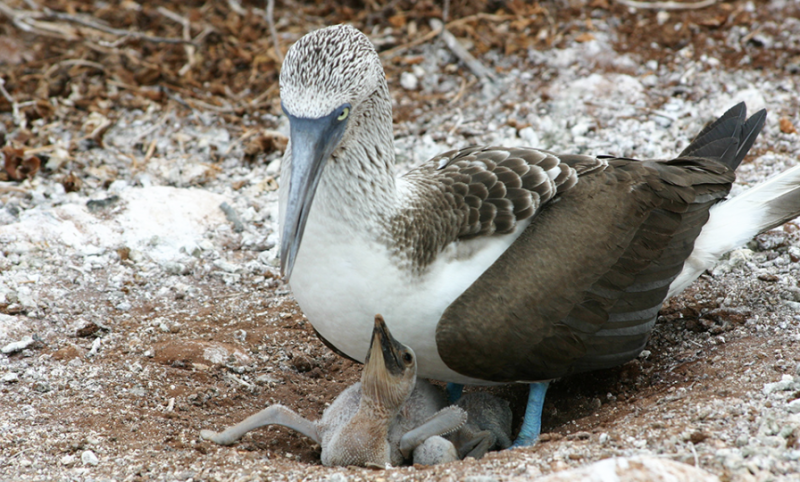 It’s likely you’ll see this brightly footed bird on every island, and lucky for you, as their easily recognizable feet and clumsy antics make them a popular visual treat for visitors! Many of the blue-footed boobies can be found nesting at the North Seymour and Española breeding grounds, and stopping to rest on Fernandina, Floreana, Isabela, Pinzón, and Santa Cruz. The best times to see these birds are during mating season, which is between April and June; the rest of the year, they choose to spend their time at sea where you can spot them diving head first to feed on fish. 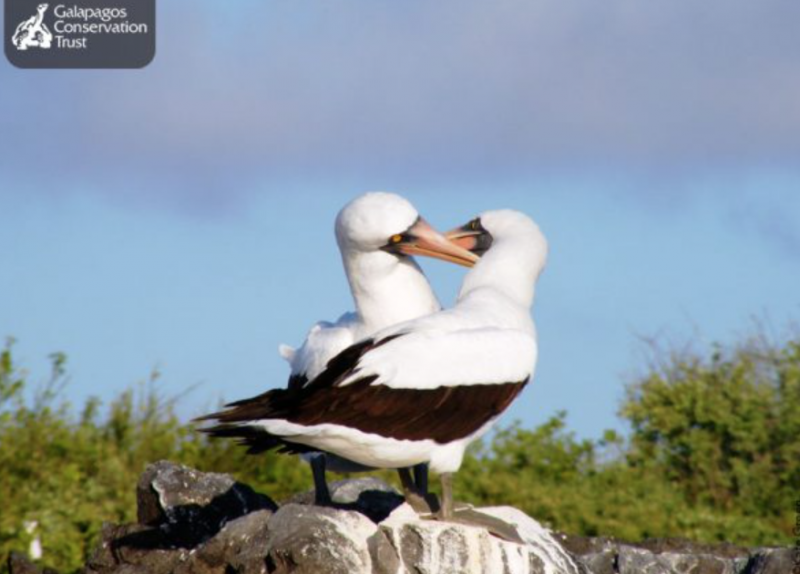 These humorous looking birds spend the majority of their time within their major breeding grounds in Genovesa, Española, and Floreana. Formerly treated as a subspecies of Masked Booby, they now afford full species status and considered endemic to Galapagos. Be on the look-out for the Nazca Booby’s  favorite spot along the cliffs on any island. August through November are the best months to get a close-up view of their nesting rituals. 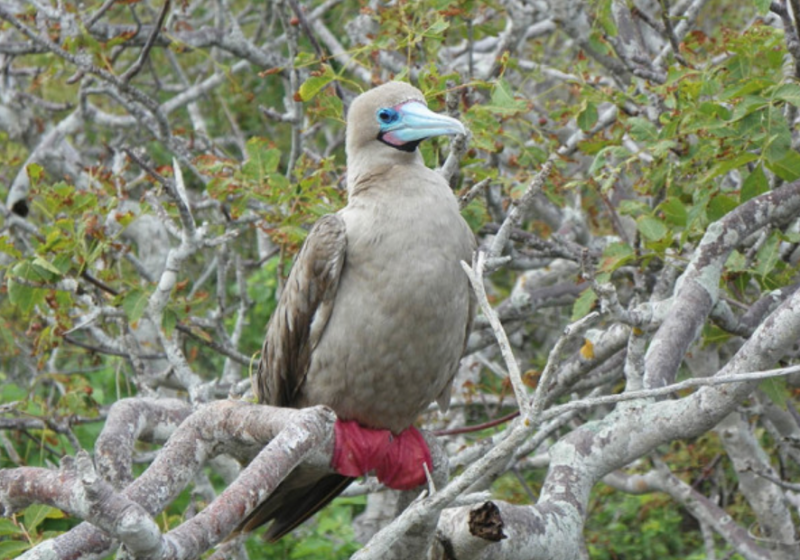 The red-footed booby, with its striking scarlet feet and bright blue beak, was until recently one of the most endangered species on the Islands. After slowly recovering from the ill effects of the El Nino in 1998, as well as efforts to keep invasive species at bay, the population has thankfully been on the rise increasing since 2008. The birds are still often difficult to find, however, they tend to feed on outlying isles of Genovesa and San Cristóbal. You are more likely to spot them at Punta Pitt, the visitor site on the northeastern side of San Cristobal. 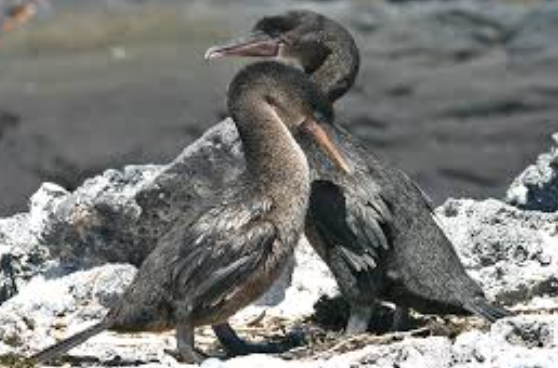 While these heavy birds lost their ability to fly, they are adept at swimming and diving, and use their strong back legs to propel themselves forward underwater. Found mostly on the northwestern coast of Isabela and the east coast of Fernandina, this native species can be seen year round and nest between May and October. 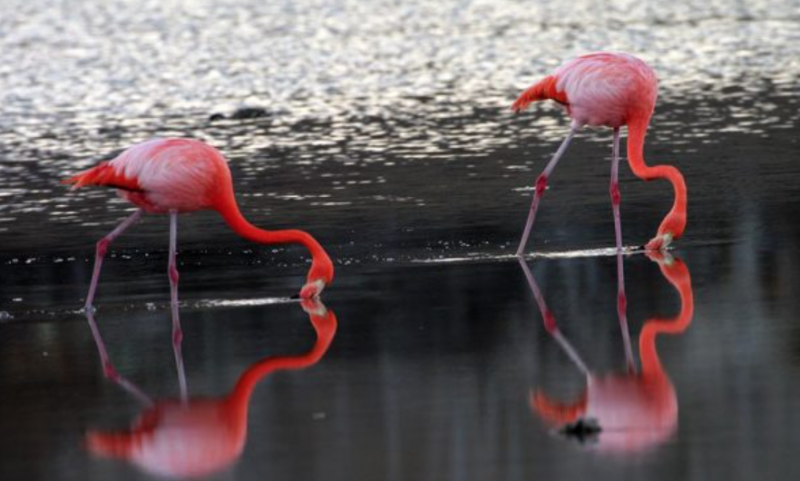 No tropical island is complete without these familiar pink birds! Along the coasts of the islands are small salt-water lagoons, where this species makes their home, building their mud nests and feeding on krill in the shallow water. Join other visitors in viewing the flamingos from June to March on Floreana, Rabida and Bachas Beach. 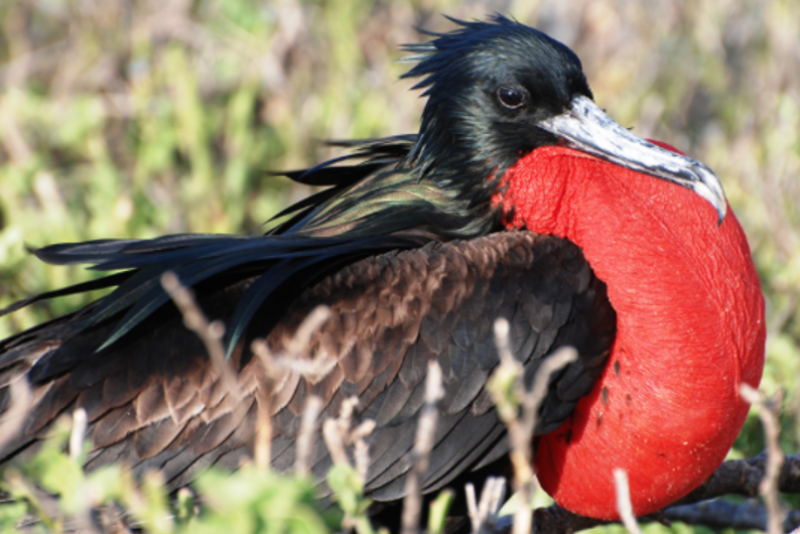 Two different species of frigate birds live in the Galapagos, the Great and the Magnificent. You are most likely to catch a glimpse of the Magnificent on the main breeding grounds on North Seymour, Floreana, San Cristobal and Genovesa; as well as in any mangrove or deciduous tree forests. The Great frigate bird is also at the center of a scientific study regarding it’s sleep patterns, and during long foraging trips, this bird will only sleep for an hour or less per day, and can often fly while sleeping. Great, indeed!  Two fantastic species that can be viewed all year round. 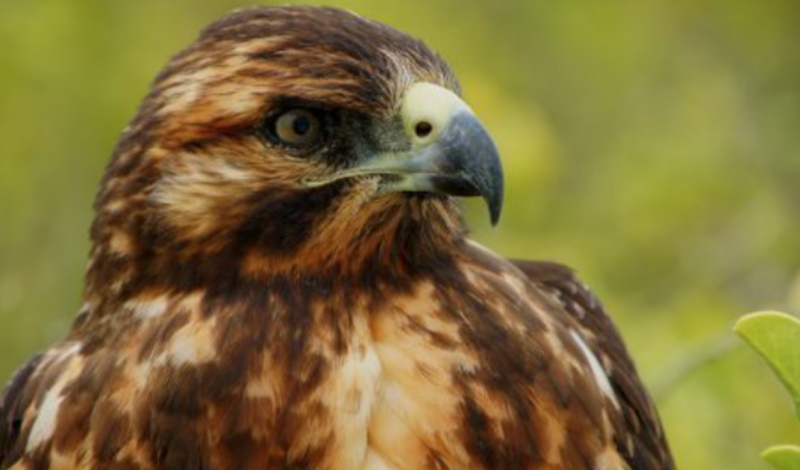 This close relative to the North American red-backed hawk can be found mostly on the main islands such as Espanola, Isabela and Fernandina, but they are extinct on the islands Baltra, Daphne, Floreana, San Cristobal and Seymour. Because the Galapagos Hawk nest all year round, they can be seen at any time of year. 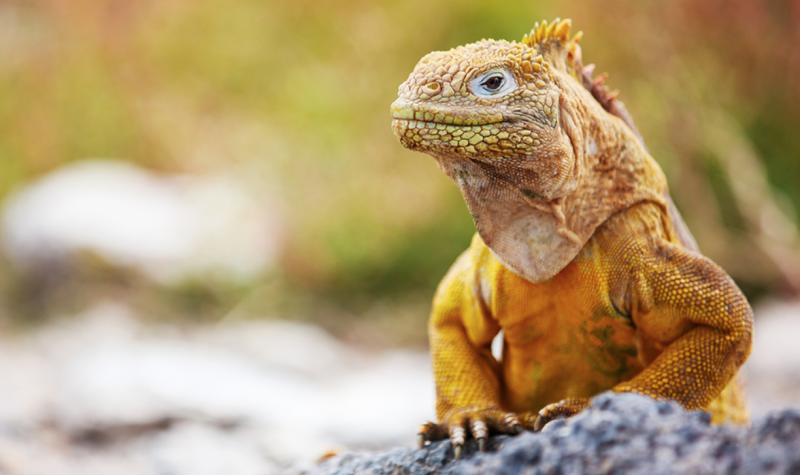 You would have a hard time missing this large, yellow-skinned lizard on your trip to the Galapagos! You may be able to find one if you peer under the tall cacti that cover the island, especially during the wet season. These large creatures like to stay hot and dry, and sleep in burrows in the ground at night to keep as much heat close as possible. Head to the islands of Fernandina, Isabela, Santa Cruz, South Plaza, and Seymour to see them up close. They are available to view all year round. 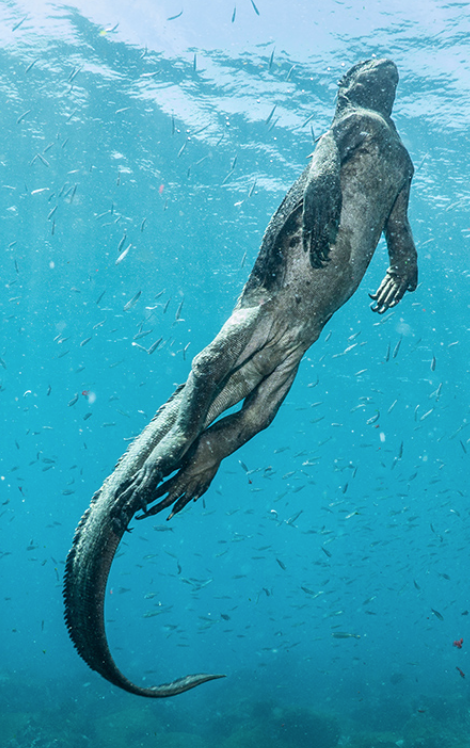 Did you ever think you’d see a lizard swim in the ocean? Well, this is your chance, because this species is the only lizard in the world that can live and forage at sea! The marine iguana changes color depending on which island you’re seeing them, from red and bright green, to red and black, to dull green and brick red. You won’t need a mask and snorkel to get a look at them; they can be seen in coastal regions on the islands of Isabela, Fernandina, Española, Floreana, Santa Cruz and other islets around them, all year round. 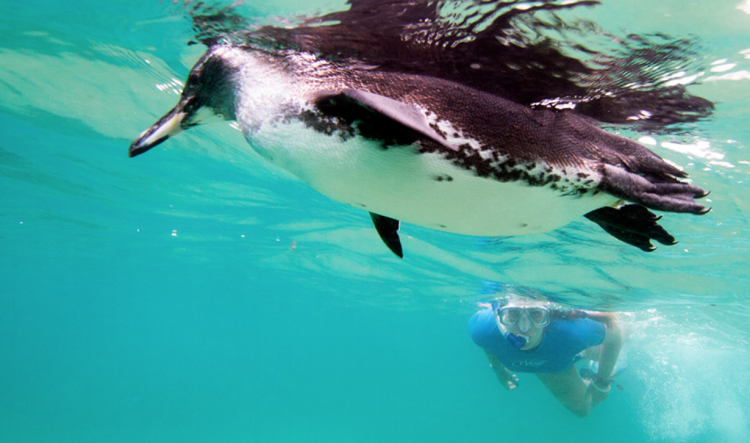 When you think of penguins, you don’t normally see them in the tropics, but this species is one of the many native species of the Galapagos. They are found mainly on Isabela and Fernandina islands but they can also be seen on Floreana, Santiago and Bartolome. People often swim with them around Pinnacle rock on Bartolome or at Sombrero Chino. Galapagos penguins live and breed on the Galapagos Islands all year round. 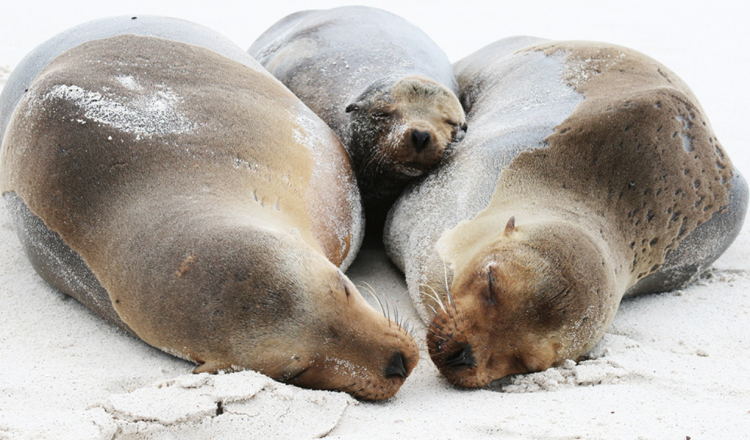 The Galapagos sea lion is not only one of the most prolific creatures to be found in the Galapagos, but because they rarely migrate, it makes viewing them up close even more possible. They are found mainly on beaches in the southern part of the archipelago on South Plaza Island, Mosquera Island, Gardner Bay in Espanola, Rabida Island (with a bachelor colony) and Puerto Egas on Santiago. 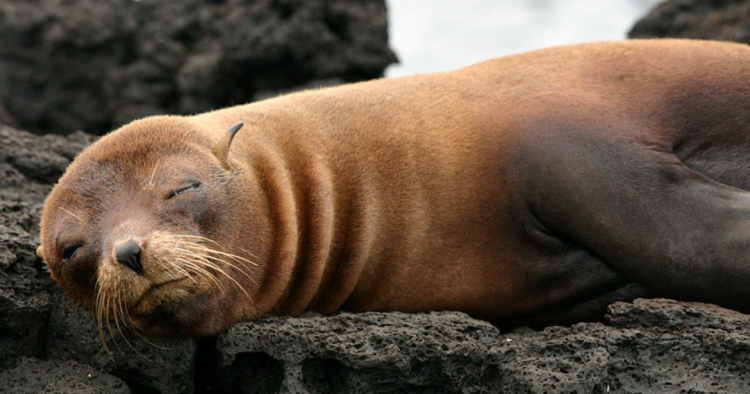 A close relative to the Galapagos sea lion, the fur seal is seen on almost every island. They can be seen most easily by tourists at James Bay on Santiago and in Darwin Bay on Genovesa. While they stay in the galapagos year round, your best chance to see pups is during October. Who could resist baby seal pups? 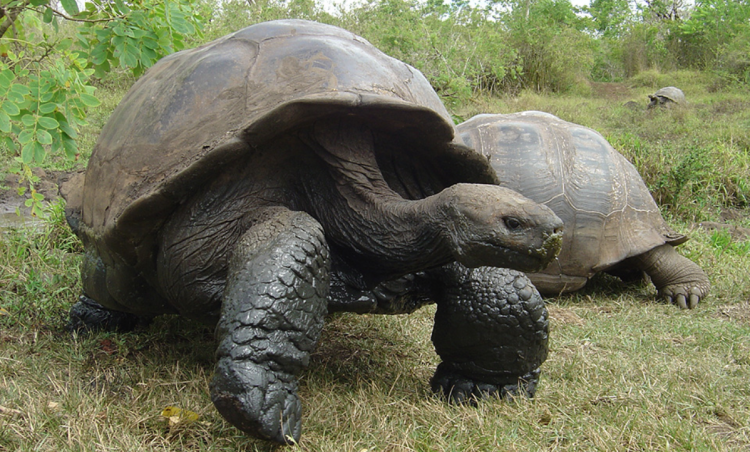 And of course, if there was one mascot for the Galapagos, it would be the giant tortoise. Creatures like Lonesome George and Diego have shown the world that there is still hope for even severely endangered species to replenish their populations. The Santa Cruz highlands and Alcedo Volcano on Isabela have the largest populations of giant tortoises, who are on the islands year round. Populations can also be found on Urbina Bay on Isabela, San Cristóbal, Pinzón, and Española.

Let us know what animal you’re most excited to see in the comments below!

Lonesome George and Diego - Stars of the Galapagos

5 Apps to Download Before Your Galapagos Cruise with Ecoventura