When one thinks of the Galapagos, it is likely that the first thing that comes to mind is the wildlife.

Countless sea lions dozing on the pale sand beaches, or century-old tortoises gently munching on cactus pads up in the highlands. Perhaps a pair of courting blue-footed boobies performing their clumsily charming mating ritual, or a waved albatross – the only albatross to be found in the tropics – soaring overhead. 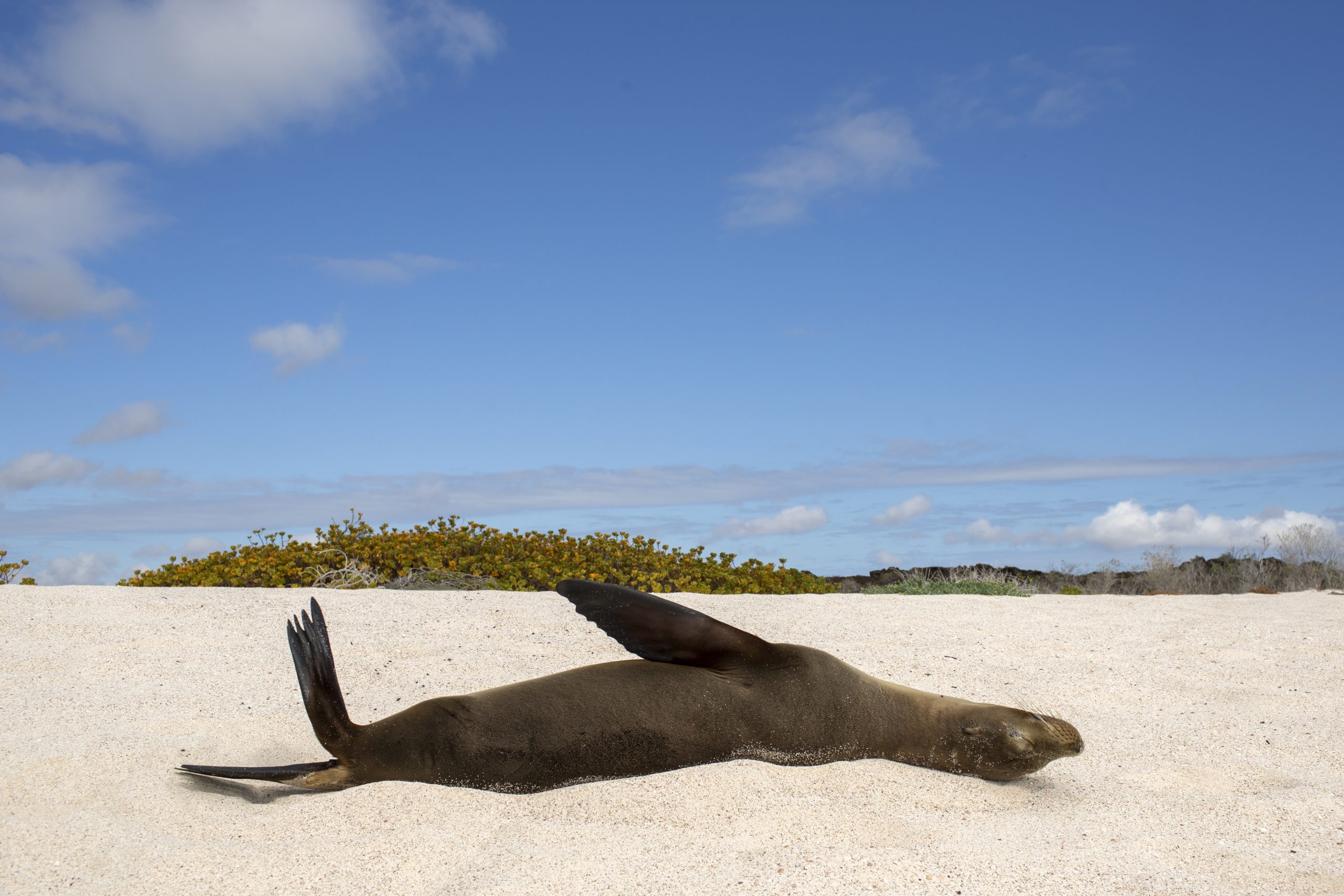 Attention may shift to the creatures beneath the waves – after all, snorkelling and diving trips are one of the most breathtaking ways to enjoy the Galapagos, and certainly one of the most memorable experiences you can have here. No one lucky enough to experience it would ever forget the sight of rays and sharks gliding through the deep, or sea turtles bobbing gently in the surf. Gazing on as a marine iguana nibbles algae 20 feet below the surface, as Galapagos penguins dart across your eyeline, is a sight to behold.

But one reason the Galapagos is such a breathtakingly beautiful location is the backdrop. The landscapes, often rugged and volcanic, form the setting for all sorts of incredible experiences.

With that in mind, we thought it was time to do some of these spots justice, with a run down of the most spectacular rock formations in the archipelago. 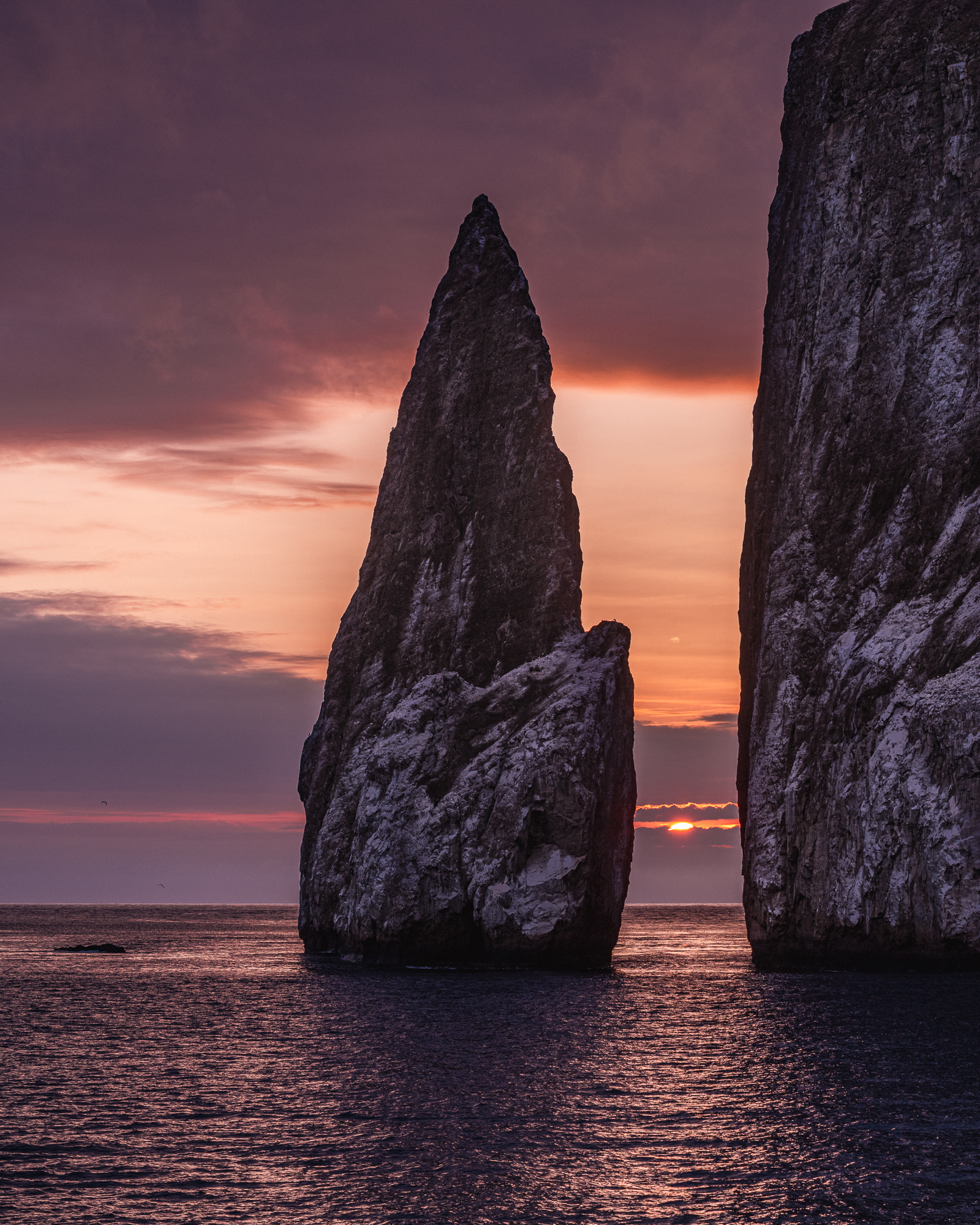 “Sleeping Lion”, otherwise known as Kicker Rock, is one of the Galapagos’ most well-known rock formations, and for good reason. The imposing cliff-faces of the island are impressive to behold, thrusting 500 feet vertically out of the sea. The island is what remains of a tuff cone volcanic formation – now split in two – and now home to blue-footed boobies, Nazca boobies and Frigate birds that shelter in the cliffs. Passengers on our luxury expedition yachts Origin and Theory won’t have to wait long to see it either – we visit Leon Dormido on the first day of both of our itineraries, so keep your eyes peeled for the Galapagos sharks that frequent the gap between the two huge rocks. 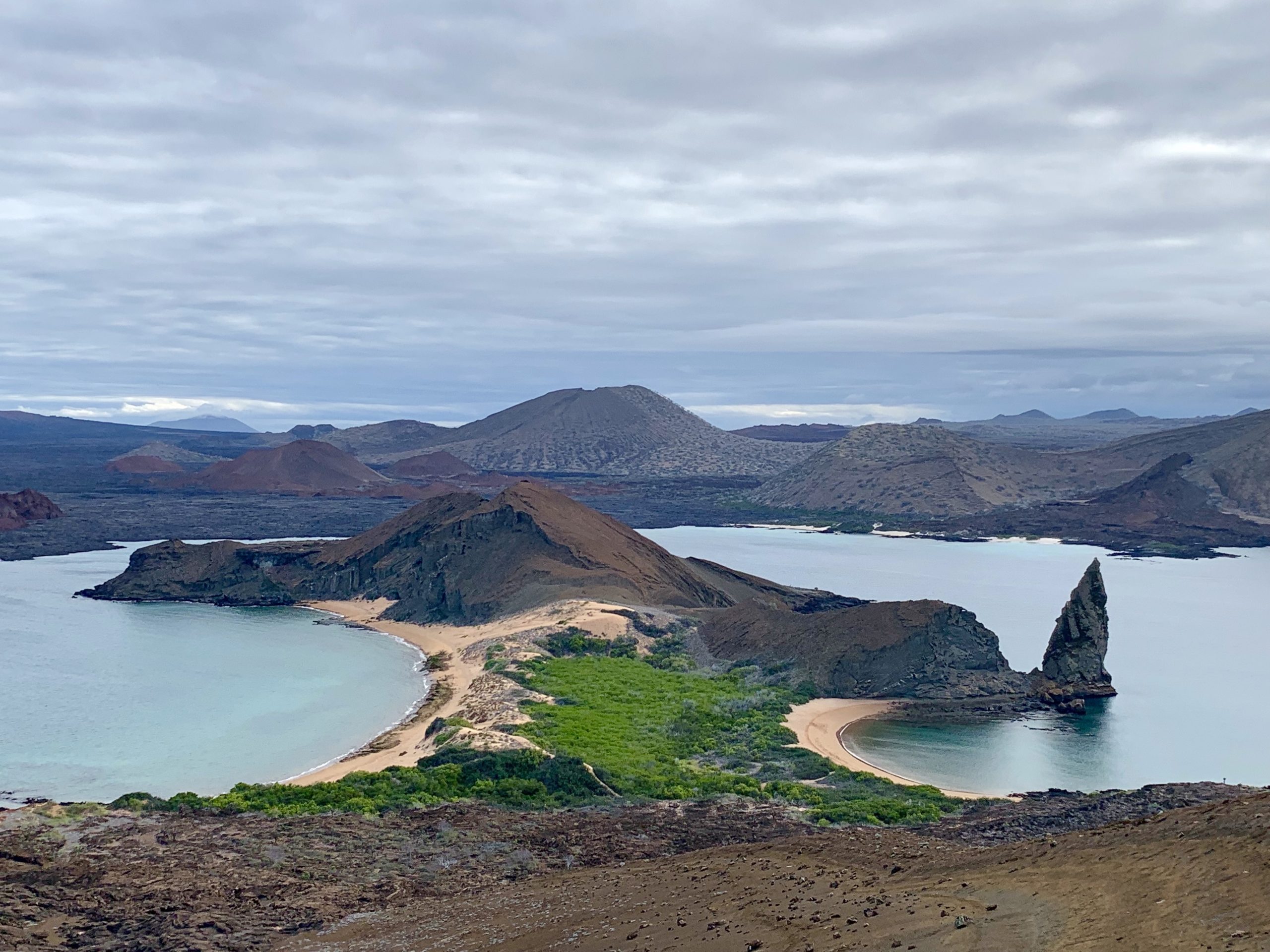 Forming one part of the Galapagos Islands’ most famous panorama, Pinnacle Rock may well be the most photographed formation on this list. Located on Bartolome Island, the rock itself is a huge obelisk that stands sentinel over Sullivan Bay, separating Bartolome from the larger island of Santiago next door. As well as providing spectacular views from the heights of Bartolome – as can be seen in the image above – the base of Pinnacle Rock is also home to a colony of Galapagos penguins, whilst sea turtles nest nearby. It’s a lovely spot for some snorkelling – available on our Beaches and Bays Itinerary A. 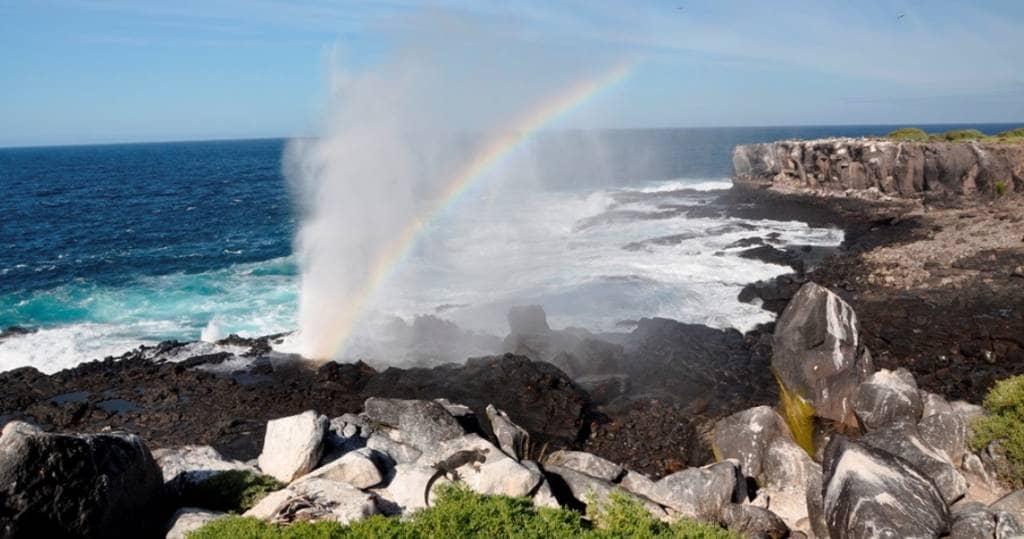 On the rocky southern coast of Española Island, a volcanic fissure cutting deep into the black volcanic rock has formed a spectacular blow hole. During high tide, waves force themselves into the crevice under high pressure, sending spouts of water 80 feet high. At times, the spray will catch the sunlight, forming beautiful rainbows for visitors lucky enough to spot it. The sight is unusual enough that we recently covered it in a list of unexpected sights to see in the Galapagos, along with sally light foot crabs taking cover from the spray, a massive colony of waved – or Galapagos – albatross, Galapagos hawks stalking lava lizards, and marine iguanas coloured in various hues of red and green. 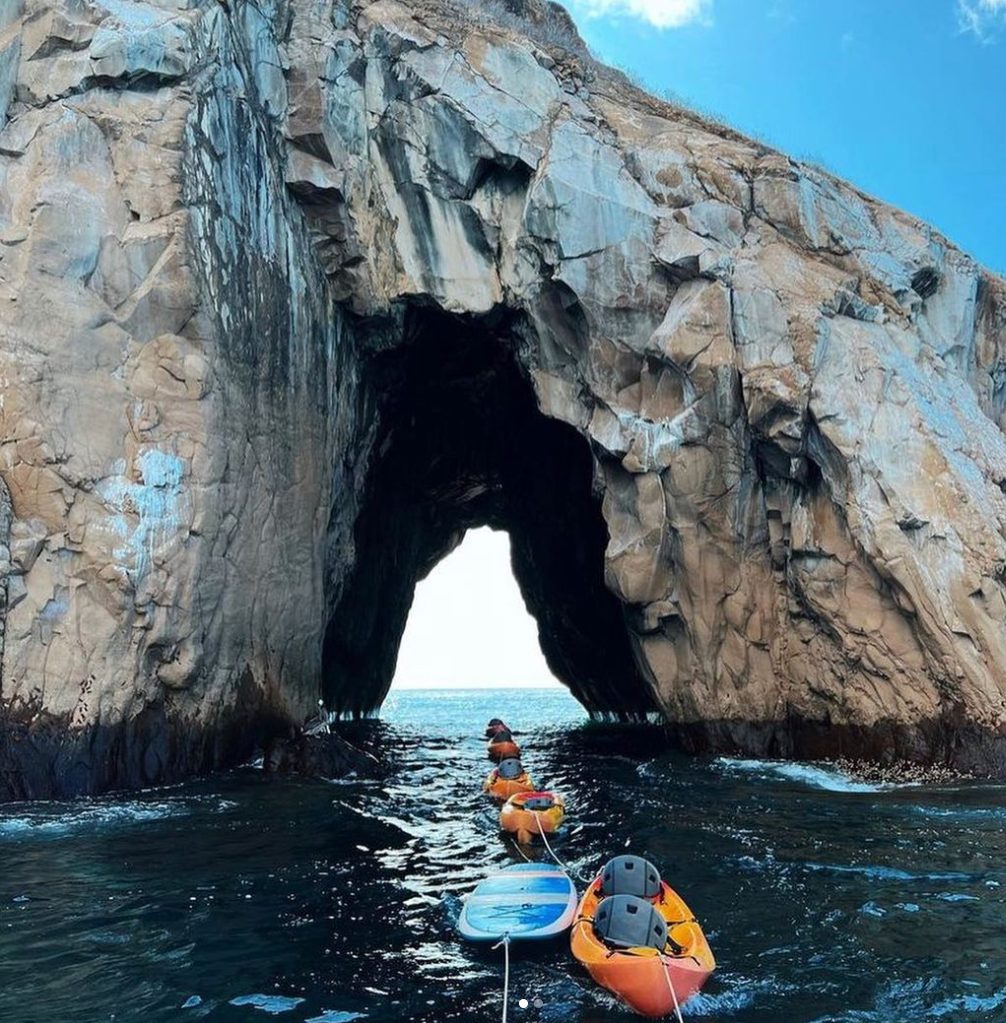 A zodiac ride along the magnificent, soaring cliffs of Cerro Brujo takes in a visit to The Cathedral, a canyon-like formation in the cliff face with walls of rock that seem to engulf the launch. Cerro Brujo is an eroding tuff cone on the north coast of San Cristobal island, formed when lava hit the sea, causing the water to heat rapidly and flash to steam, in turn disintegrating the lava into powder which, over time, settles and hardens into rock. A little further along the coast is a remarkable arch, carved through the rock by relentless waves. From some angles Kicker Rock can be seen in the distance, framed by the arch for a postcard-worthy photo. 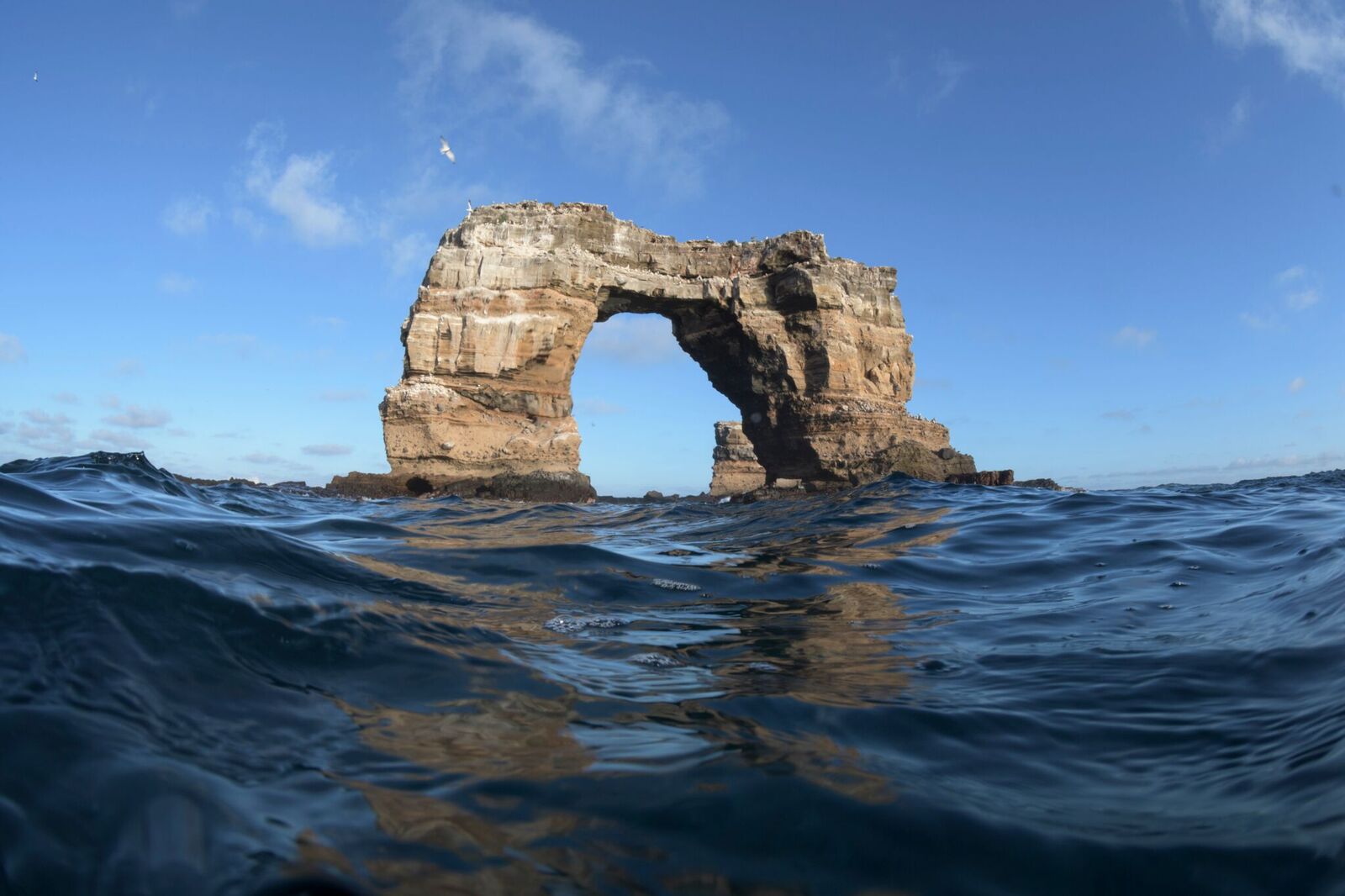 Now known affectionately by the team as Darwin’s Pillars, the Arch collapsed on 17 May 2021 after years of erosion from wind and sea. Whilst the arch itself – once an iconic sight in the Galapagos – is no more, the diving under the waves is as epic as ever, and can be visited on our liveaboard dive yacht Galapagos Sky. A hotspot for hammerheads and other sharks, the area around the arch and nearby Wolf Island is often regarded as among the best dive spots in the world, justly famous for its huge gatherings of hammerheads and rays. 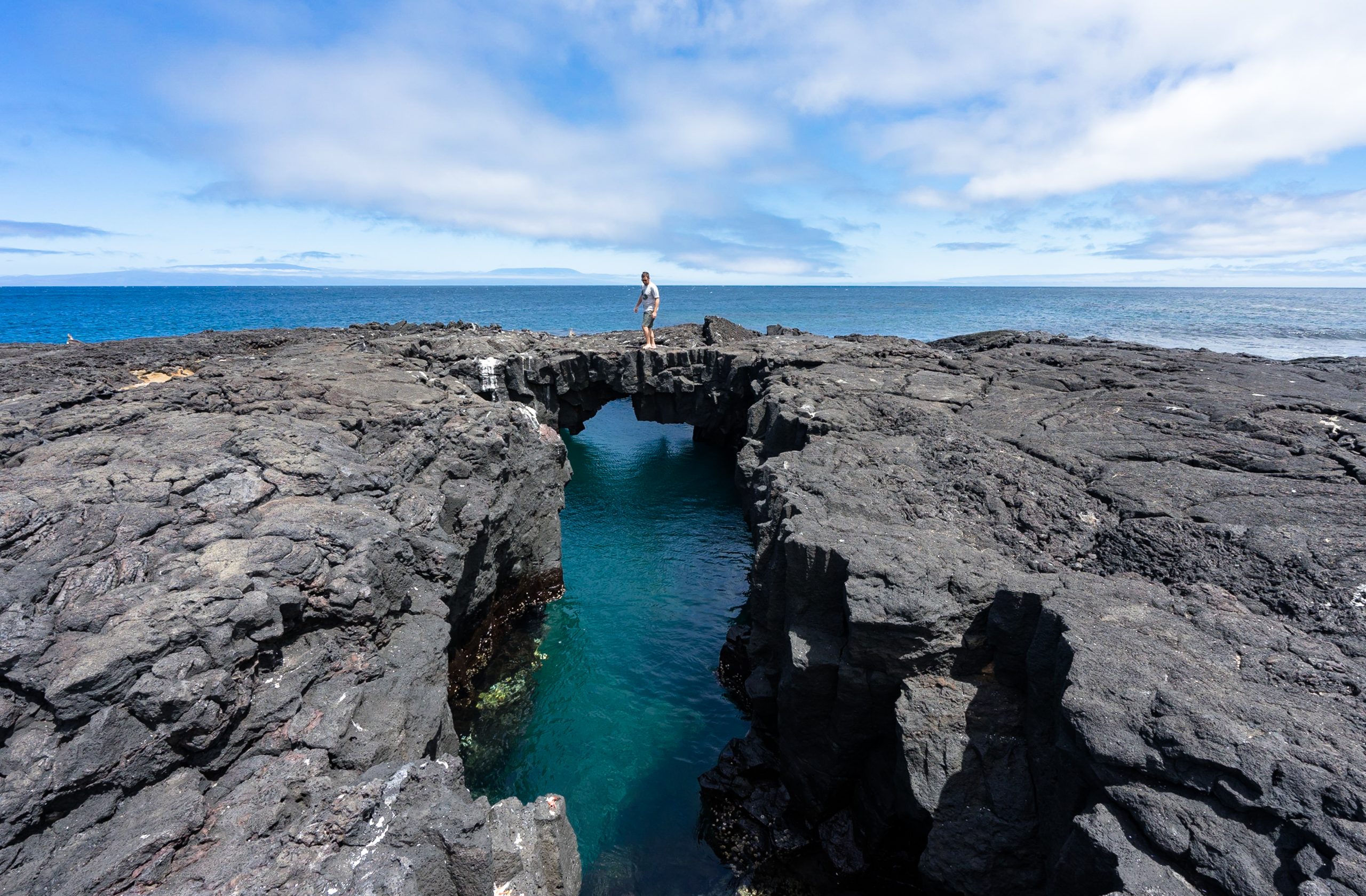 Named after Hector Egas, a salt-miner who, for a time in the 1920s, extracted salt from the island, Puerto Egas is now a popular stop-off point that we visit on our Volcanic Wonders Itinerary B. Flat, black lava formations stretch from the shoreline, which passengers can explore on foot. Look for octopus, starfish and other marine creatures caught in the tidal pools formed by the volcanic rock, or great blue herons, lava herons and oystercatches hunting for a meal. Puerto Egas is also the starting point for trails leading to grottos – deep pools of clear water – where you will find fur seals sheltering in the shallows. 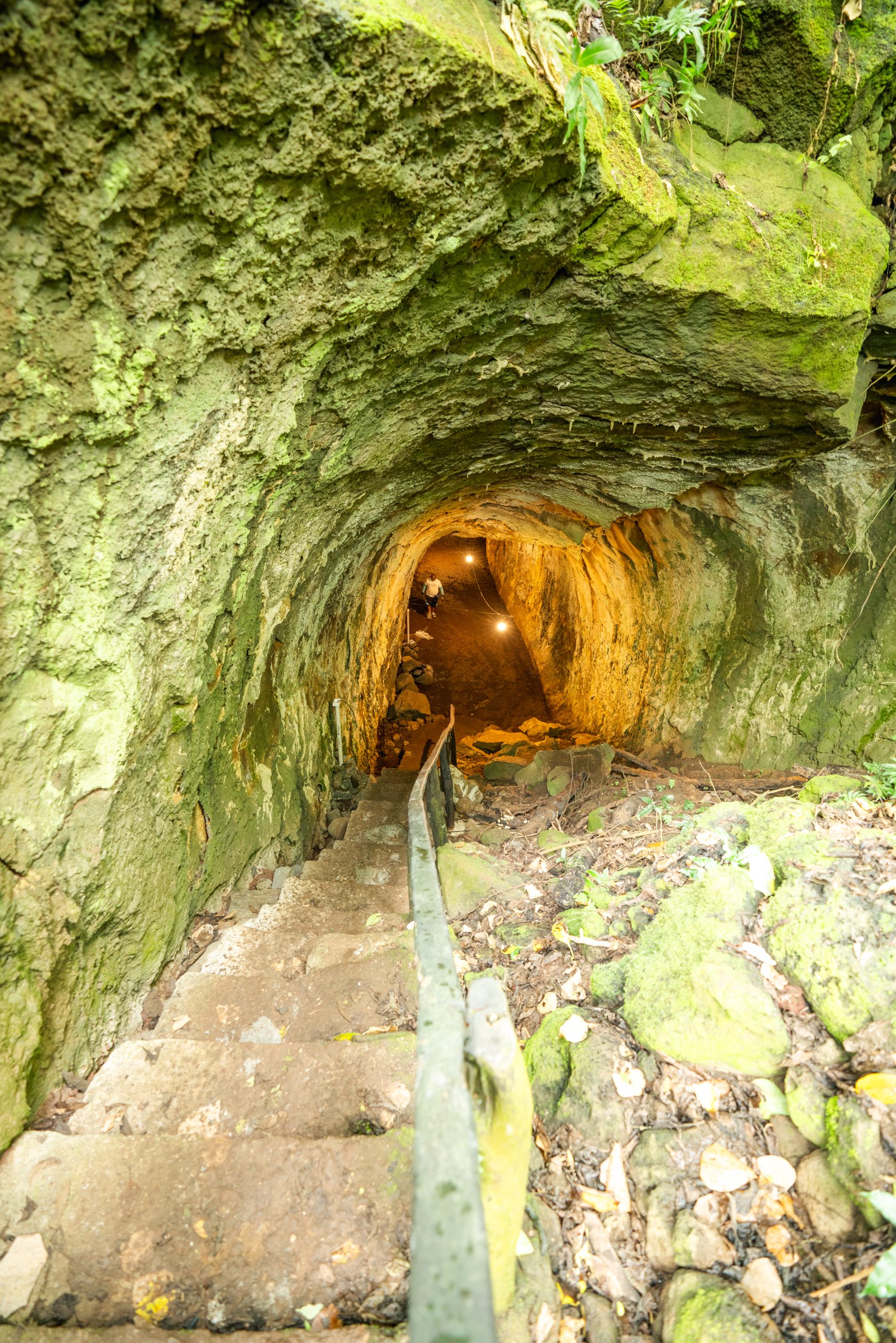 Found high up on Santa Cruz island, these fascinating lava tunnels at El Mirador and Los Gemelos, a pair of volcanic craters, were formed when lava flows on the earth’s surface cooled and hardened, whilst molten lava continued to flow underground. The result was a skin that set, forming the tunnel walls, whilst the liquid magma inside continued flowing to create the tunnel hollow itself. Passengers can explore the spectacular tunnels on a visit to the highlands of Santa Cruz, where we also visit Rancho Primicias, a privately-owned hacienda where giant tortoises roam freely through the forest, feeding or resting in shallow pools. 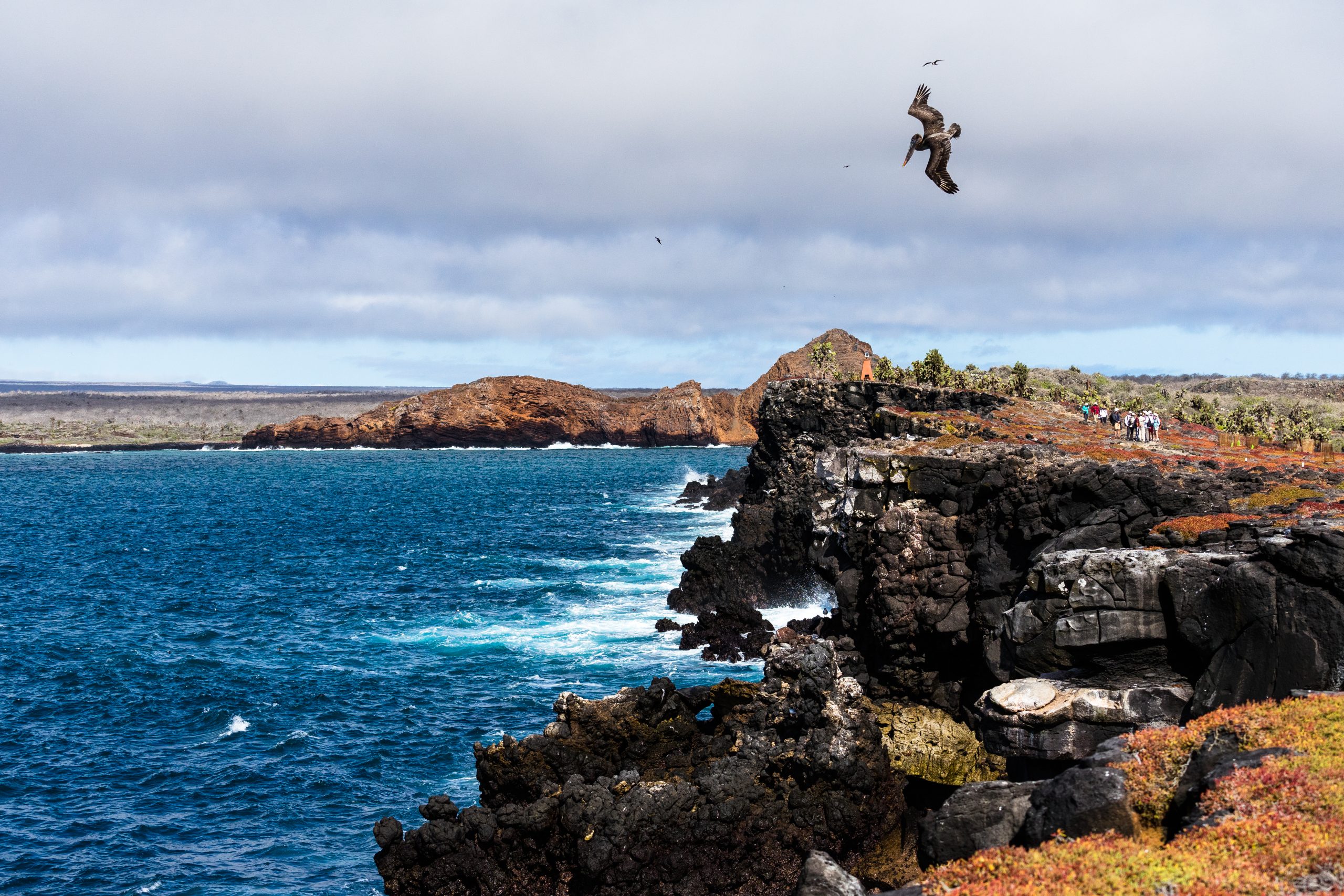 South Plaza Island is a burst of color, as the dark volcanic rock contrasts with the bright green Opuntia, or prickly pear cactuses that grow in abundance on the island, as well as the bright red and violet Galapagos carpetweed that covers much of the ground – it changes color through the seasons, from a lush green in the rainy season, to a parched yellow at the peak of the dry season. The cliffs themselves dominate the coastline, forming an impressive, if somewhat imposing, shore as the rough igneous rock plunges into the surf below, and swallow-tailed gulls and pelicans soar overhead. 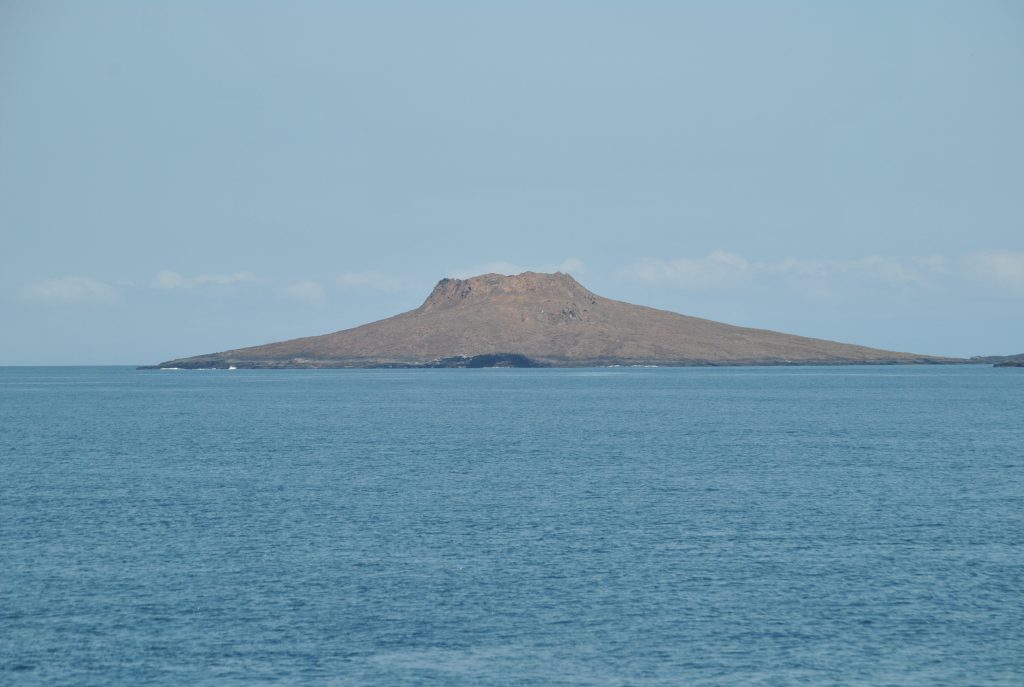 Known affectionately as “Chinese Hat” in Spanish, this island owes its name to its shape – many say it resembles a traditional Chinese conical straw hat. Visitors on our Beaches and Bays Itinerary A can go ashore this small, barren island to explore; bright sally lightfoot crabs and sea lions can be found scattered across the shores, and keep your eyes peeled for oystercatchers as they march across the sand. What’s more, snorkelling off the island is not to be missed; it’s a great spot for marine iguanas nibbling the algae beneath the waves, whilst Galapagos penguins gather in large numbers. 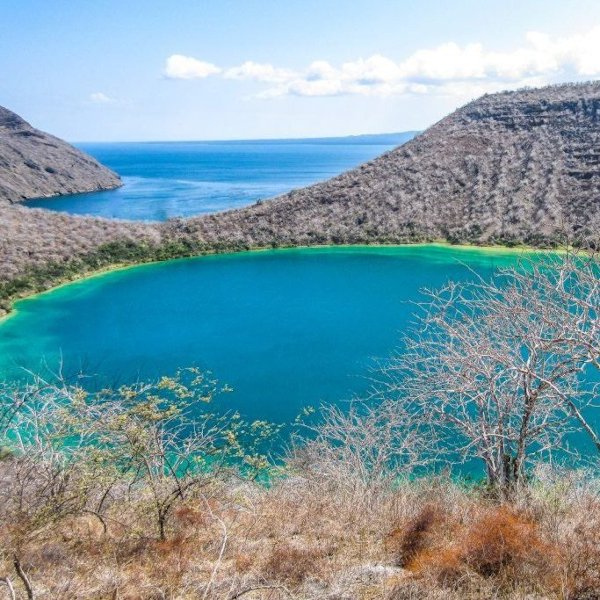 A kayaking and snorkelling hotspot if ever there was one, Tagus Cove on Isabela Island has a rich and varied history. Visited by Charles Darwin in 1835, the cove owes its name to the British ship Tagus, which visited in 1814 whilst searching for Giant Tortoises. The cove was also once a hideout for pirates and whalers who plied their trade in the pacific – graffiti from as far back as the 1800s carved in to the cliff faces is testament to their presence. Tricky to access on foot, kayakers can enjoy spotting flightless cormorants and Galapagos penguins plunging through the water, whilst sea lions and marine iguanas are found in abundance. Under the seas, keep your eyes peeled for sea turtles and iguanas, or even sea horses and the elusive Port Jackson shark.

Hold the front page - Ecoventura in the media in 2022