The Galapagos is rightly known as one of the planet’s most wonderful marine environments. Thrilling face to face encounters with wildlife is a daily occurrence, and beneath the waves, this is no exception.

Hosting over 2,900 marine species who enjoy the warm, nutrient-rich waters created from the confluence of three major ocean currents, the result is a remarkably rich biodiversity within the 51,352 square miles of the Galapagos Marine Reserve (GMR) established in 1998 and is a UNESCO World Heritage Site.  The GMR hosts nearly 20% endemic species – creatures found nowhere else on Earth – a remarkable figure given marine species tend to migrate and intermingle to a much larger degree than their terrestrial cousins.

And for visitors, this stunning concentration of marine life has created a snorkeler’s paradise, filled with bright tropical fish, playful sea lions, tiny creatures such as sea urchins and sea horses, and giants of the seas like the whale shark. 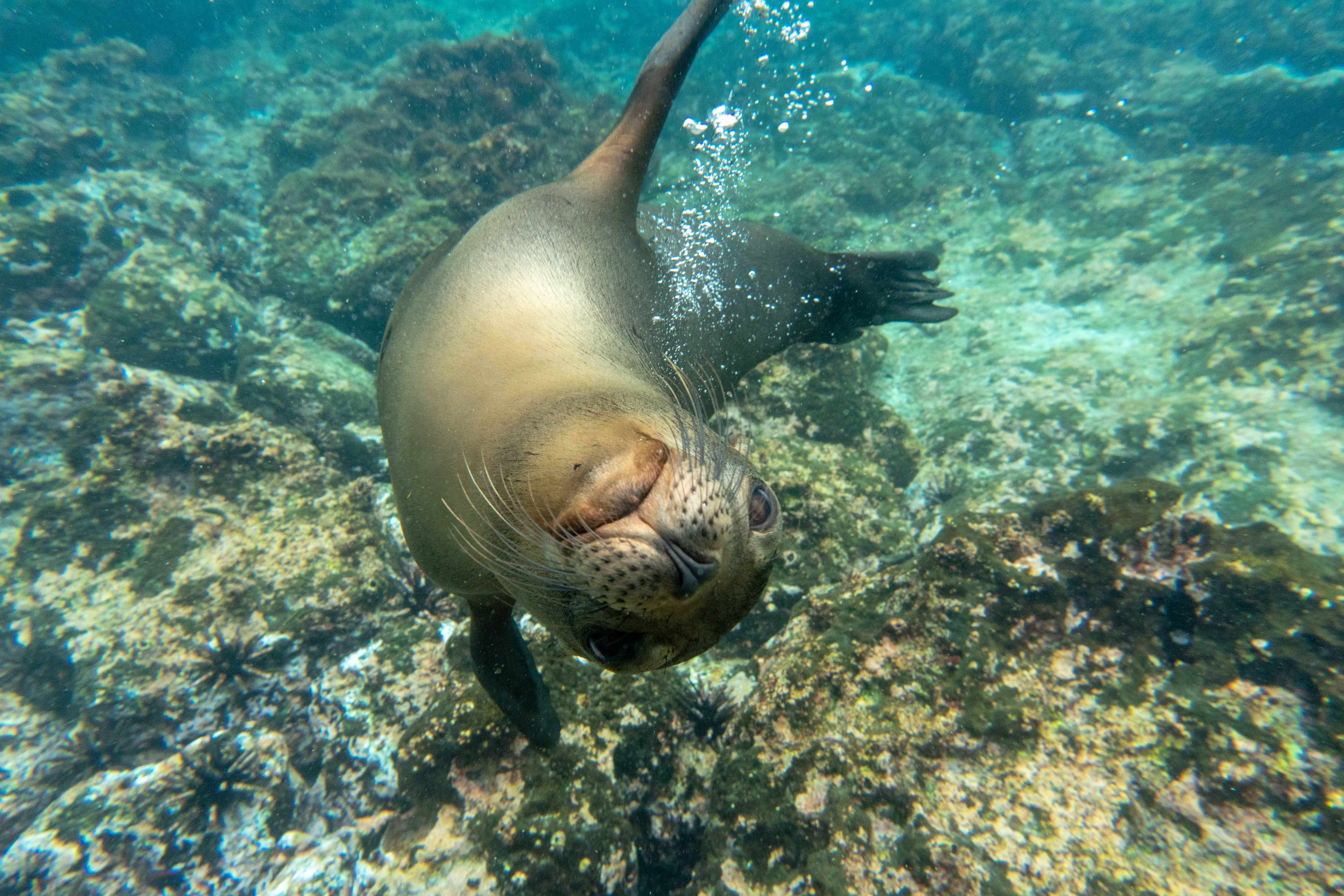 With a host of snorkeling spots across the islands, be it pristine white sand beaches for shallow water outings, or secluded coves and deep-water islets accessible only by zodiac, there’s enough to keep even the most enthusiastic snorkeler busy.

So don your wetsuit, grab a mask and flippers (all provided by Ecoventura, rest-assured) and dive into a summary of our favorite snorkeling spots, each visited on one of our two itineraries and all particular favorites of our seasoned guides. 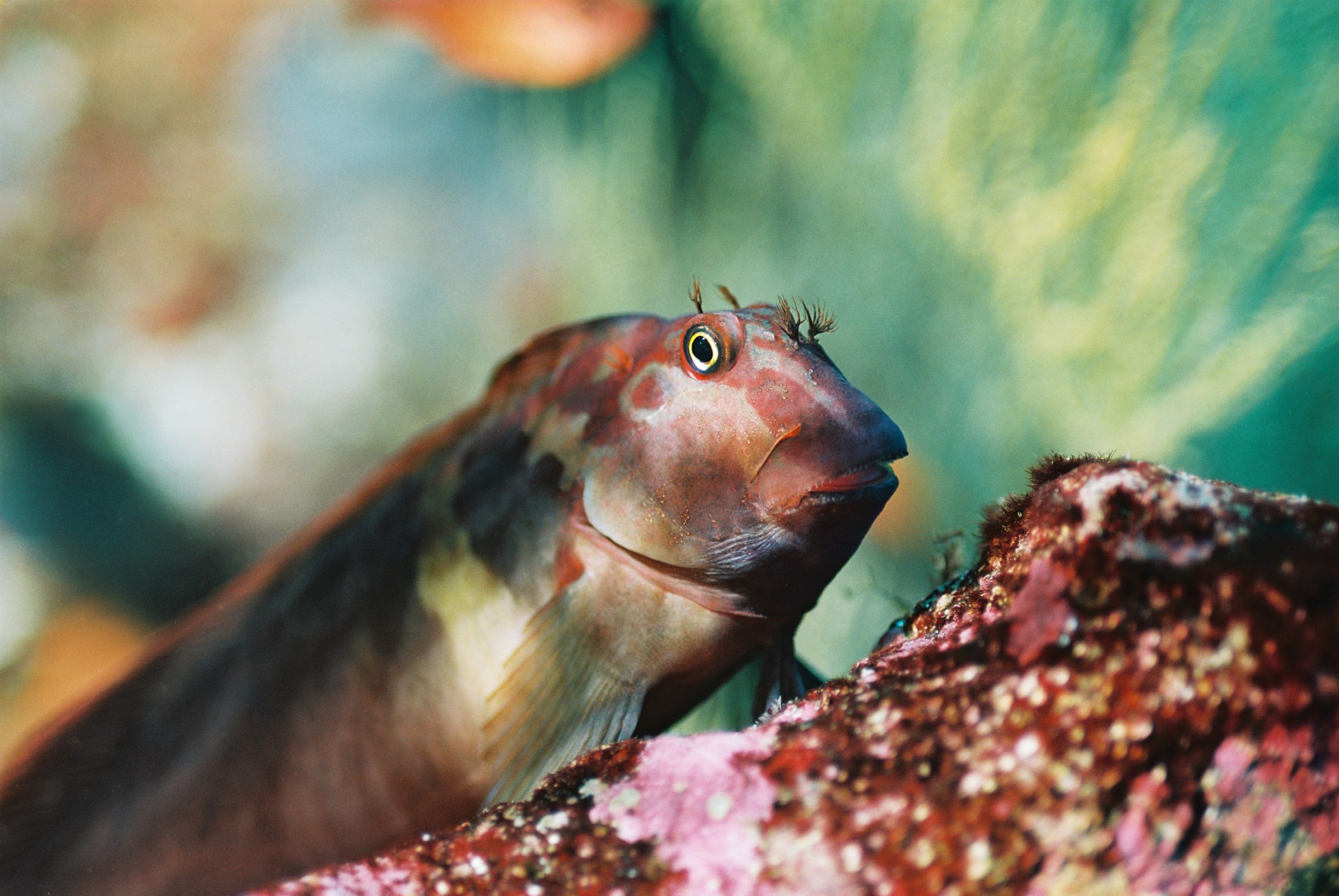 Itinerary A – “Beaches and Bays”, the Southern & Central Route

This ring of jagged rocks, emerging from the seas just off Floreana Island, was formed from an eroded volcano crater many years ago. Above the waves, the rock walls host hundreds of pelicans and blue-footed boobies resting between fishing expeditions. Beneath the waves, things really get interesting. The Devil’s Crown is known as one of the Galapagos’ best snorkeling spots due to the wonderful array of marine wildlife that use the rocks to shelter from the ocean currents. Home to moray eels, a dazzling collection of multi-colored parrotfish, surgeonfish and king angelfish, numbers of wrasses and amberjacks, the list really does go on and on. And for those adventurous to head to the more exposed ocean-facing side of the crown, the deeper waters attract rays, turtles, and even Hammerheads and White-tipped reef sharks. 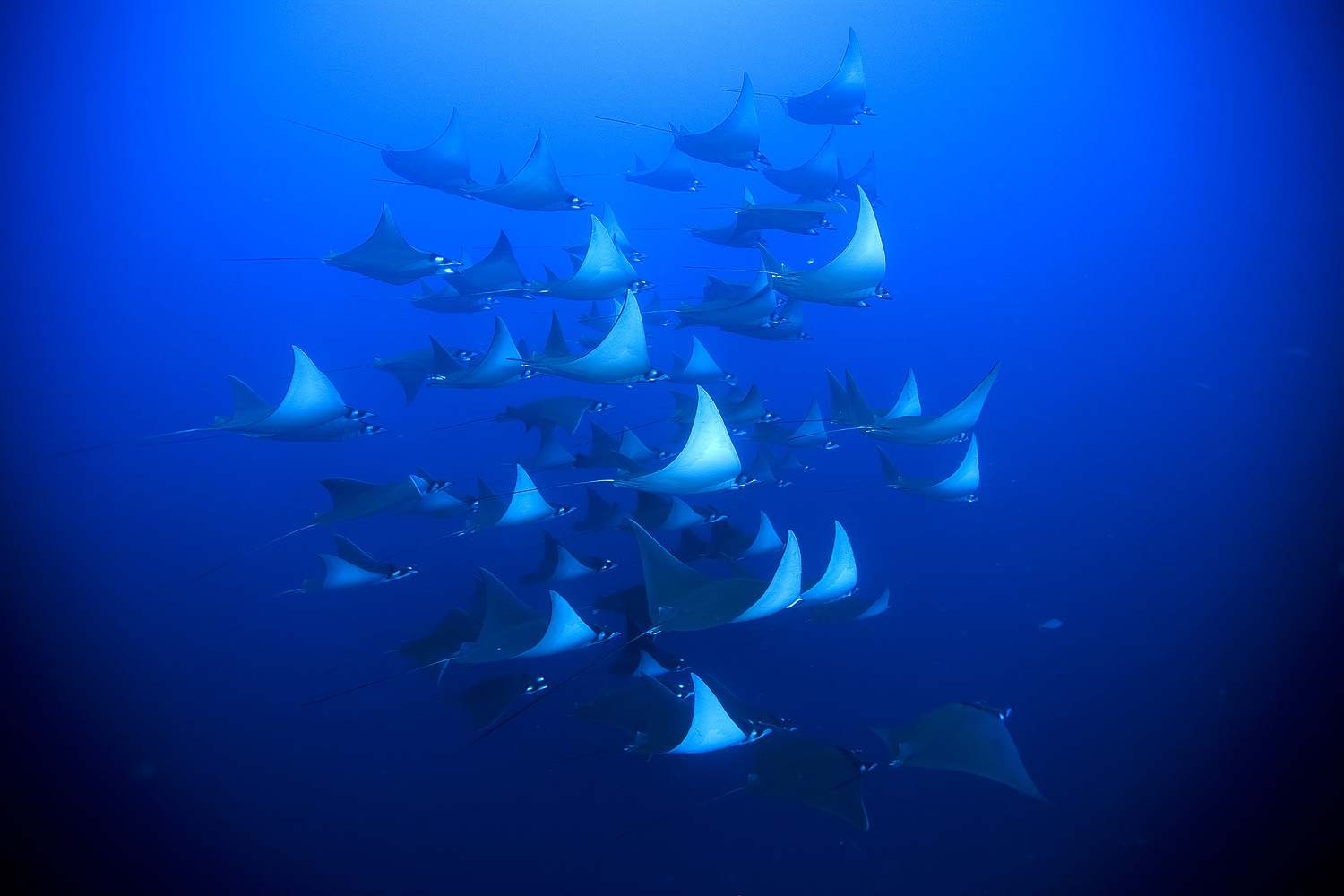 Named after a famous whaler, Andrew Champion, this small island is now thankfully famous for another reason – this spot is considered one of the most beautiful in the archipelago and is a favoured location for dolphin viewings. In addition, sealions are a constant companion on any snorkelling trip. “The first time a sealion swam passed me it was a bit nerve-wracking”, one of our recent guests, Emily Hunter from Niarra Travel, told us after an outing from our luxury expedition yacht Theory in October, “but then you realise they are just like little puppies wanting to play and blow bubbles – I will never forget snorkeling with three sealions who swam like ballerinas, swirling and dancing in the water!” The islet is also a great spot to see the famous Galapagos penguins, as well as colorful reef fish and graceful sea turtles. On land, the island is well known as one of the last bastions of the Floreana Mockingbird, famously documented by Darwin on his voyage to the islands over 150 years ago.

Named in honor of the post box on the island, where whalers and sailors would leave letters to be picked up and taken home by passing ships in years past, the post box still functions in a similar way today – leave a postcard, and with any luck a tourist heading home will deliver it to its destination! The shores around the bay are ringed with mangroves and soft sand – an ideal launching point for a shore-based snorkel trip. Turtles, rays and sealions frequent the warm, shallow waters of the bay, so you should have company! 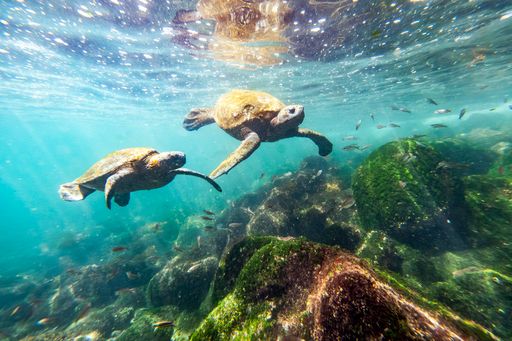 Named after a prominent American geologist, Henry Osborn, this tiny island is near Espanola Island and only accessible by zodiac when the waters are calm. It’s worth the effort though, as this isolated spot teems with marine life; parrotfish, sea lions, butterfly fish and many other colorful fish call it home, not to mention green pencil urchins and an array of corals.

An endless strip of fine, pale sand, Gardner Bay is the longest beach in the Galapagos Islands and is widely considered to be one of the most spectacular in the entire archipelago. A favorite napping and breeding spot for sea lions, visitors will be sure to encounter adults and pups lounging on the dunes or, for those looking to snorkel from the beach, cavorting in the shallows. Further from shore towards Tortuga Rock, schools of bright tropical fish dart through the waters, whilst sleepy white-tipped reef sharks can often be seen napping near the seafloor. Or perhaps not so sleepy, as one of our recent visitors reported: “while snorkeling near Gardner Bay, from the zodiac in deep water, hundreds of hammerhead sharks swam through about 40 feet beneath us. It was an adrenaline rush for me, but others hightailed it back to the zodiac!” 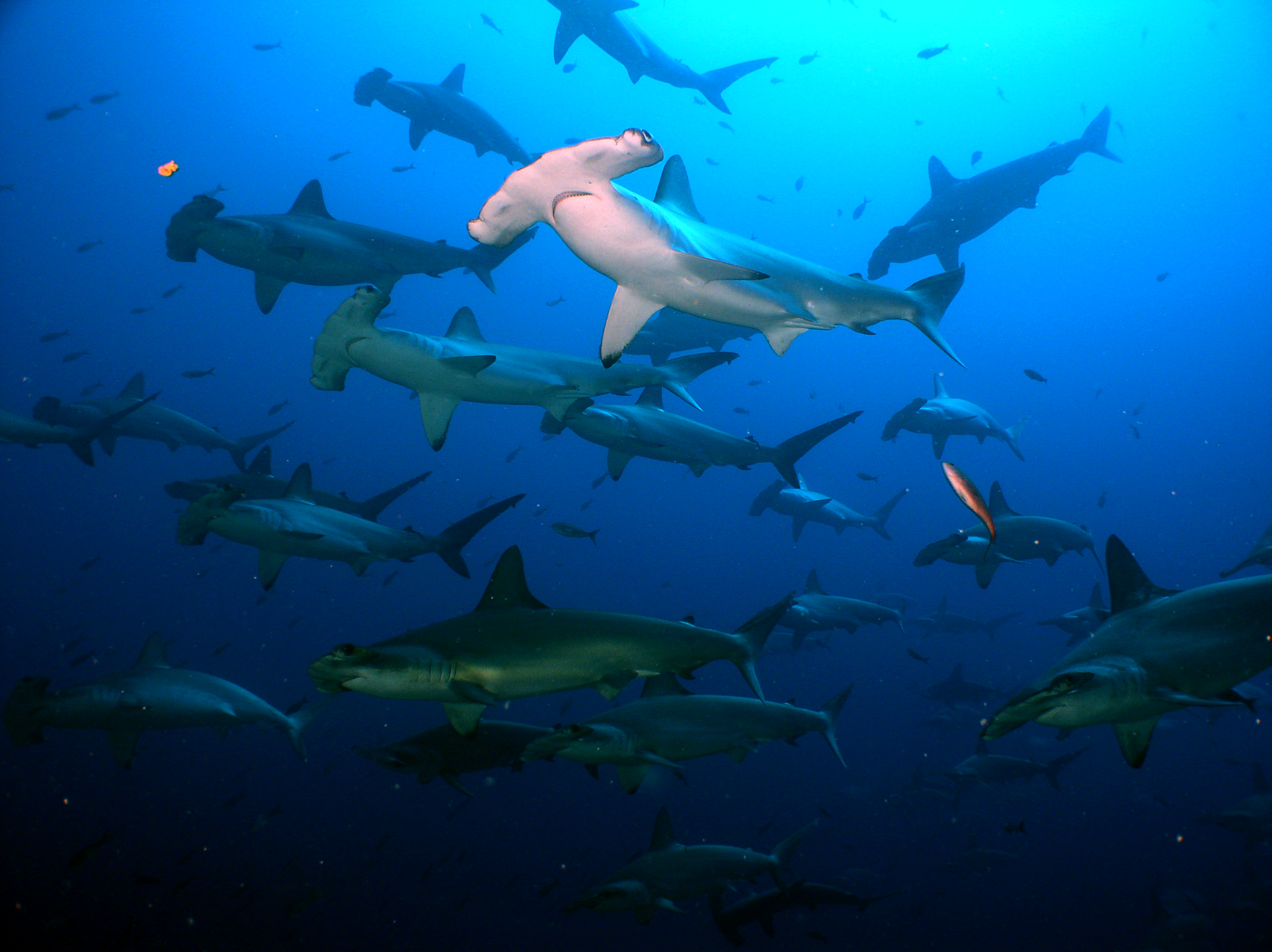 One of the best-known landmarks in Galapagos, framing as it does the view from the peak of Bartolome Island with the turquoise Galapagos seas beyond, Pinnacle Rock and the nearby beach are one of the greatest snorkeling spots in the archipelago. The soft, white sand is used as a nesting site for green sea turtles, whilst a colony of Galapagos penguins – the most northerly population of penguins in the world – resides in the shelter of Pinnacle Rock itself. Ever-present sea lions will most likely accompany you on any outing, whilst in the skies above blue-footed boobies may well on the hunt.

Located on the northwest tip of Isabela Island are the remains of an ancient volcano, protected from the ocean swells and ringed with two beautiful turquoise coves. A fantastic snorkeling spot reachable only by zodiac, visitors might be lucky enough to see the rare Port Jackson shark and even the remarkable sunfish. This extraordinary creature, known colloquially as the Mola Mola, is the heaviest bony fish on the planet; some fish have been known to weigh up to 5,000 pounds! Sponges, corals and various colorful fish also call this area home. 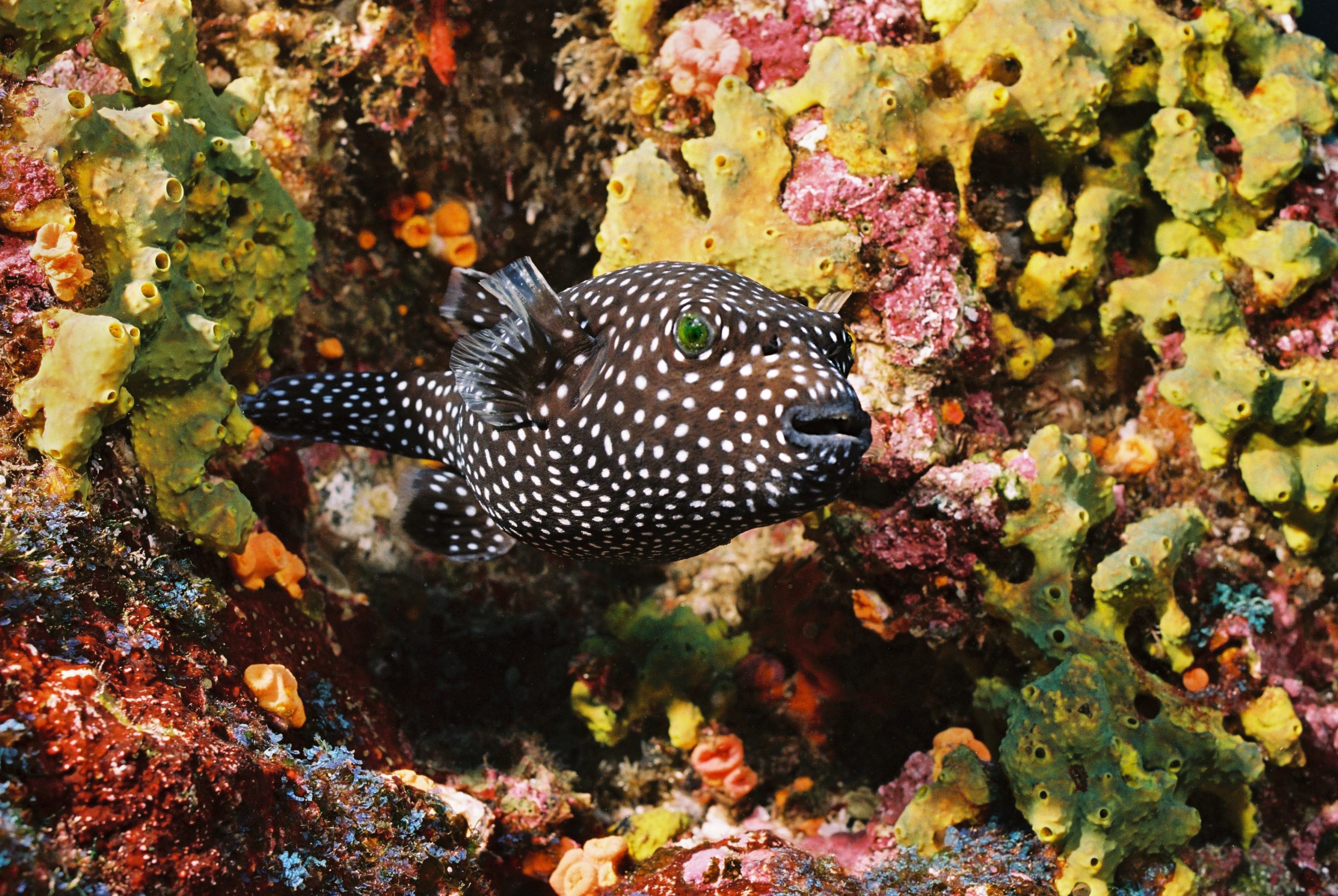 Roughly shaped like a conical hat of oriental origin in times past, this easily recognizable islet off Santiago Island is great to explore, with bright sally lightfoot crabs and marine iguanas scattered across the shores. The only aquatic lizard in the world, these fascinating reptiles live along the shoreline and among lagoons and mangrove swamps. Feeding underwater on seaweed and algae found clinging to underwater rocks, they can dive up to 30 feet and remain underwater for up to 30 minutes – a remarkable spectacle if you can spot one mid-dive! Under the waves, it is also one of the best sites to see Galapagos penguins – concentrations here can be mind-blowing – whilst the waters are still deep enough to attract reef sharks. 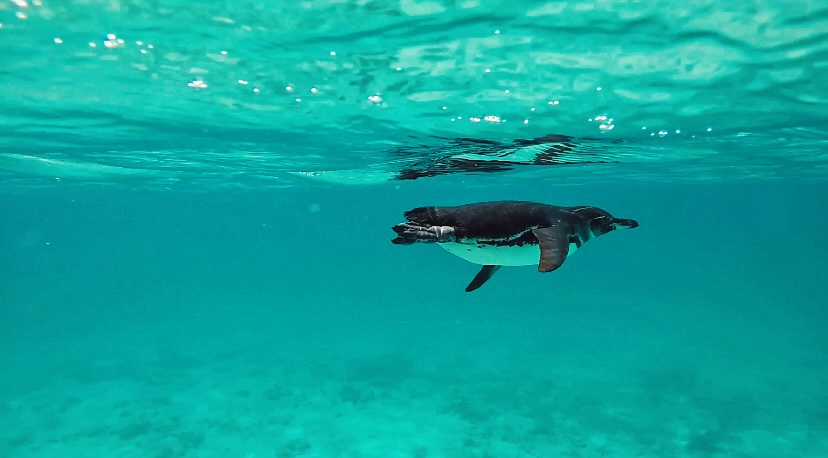 Named after the late, great Prince Philip – Queen Elizabeth II’s late husband – who visited the Galapagos in both 1965 and 1981, this remarkable rock formation is certainly fit for a prince. A half-submerged caldera, that has partially opened and flooded with time, this wonderful site is home to thousands of seabirds, including red-footed and Nazca boobies as well as finches, mockingbirds, and short-eared owls. The flooded caldera is a home for manta rays – which are inspiring scientists to design a new device to filter microplastics – whilst schools of hammerheads are also frequent visitors. 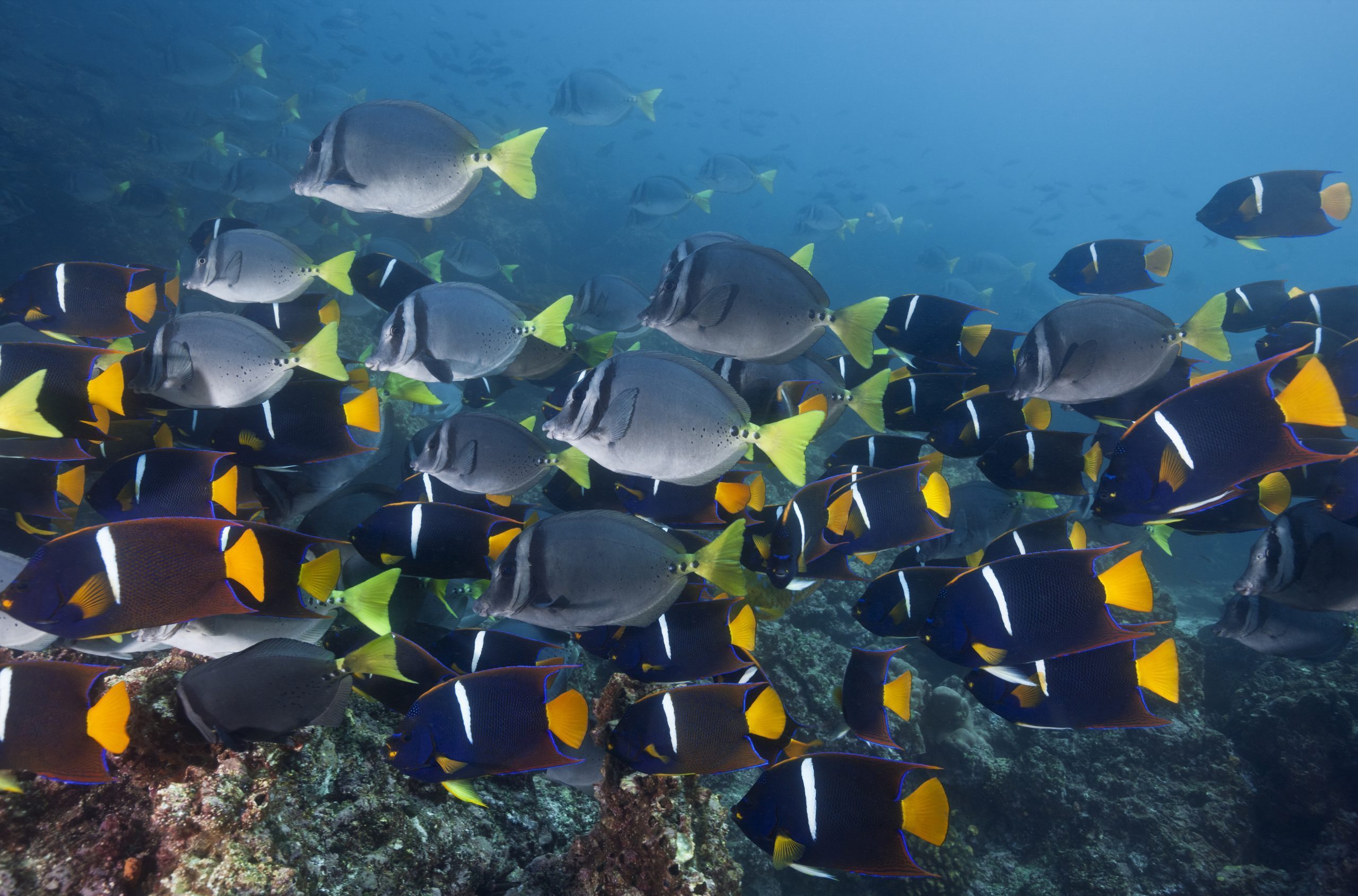 As a result of the cove opening to the nutrient-rich Bolivar Channel, snorkelers often spot sea turtles and marine iguanas grazing on the algae below, whilst towards the surface Galapagos penguins and the rare flightless cormorants dart through the waters looking for fish. Historically a pirate hideaway, the only creatures hiding here now are sea horses and the rare Port Jackson shark – anyone privileged to spot either of these famously elusive beings has certainly struck gold.

Located right on the Bolivar Channel, Punta Espinoza offers thrilling snorkeling in troughs formed by currents carving through the volcanic rock. The cooler, nutrient-rich waters are frequented by very large marine iguanas and sea turtles. Zodiac rides are often accompanied by dolphins cutting through the waves, and one of our recent expeditions was even treated to a feeding frenzy as hundreds of bottlenosed dolphins chased a school of anchovies. From the boat you may even get to see pilot or humpback whales, whilst watching blue-footed boobies diving into the water is always a fascinating spectacle. 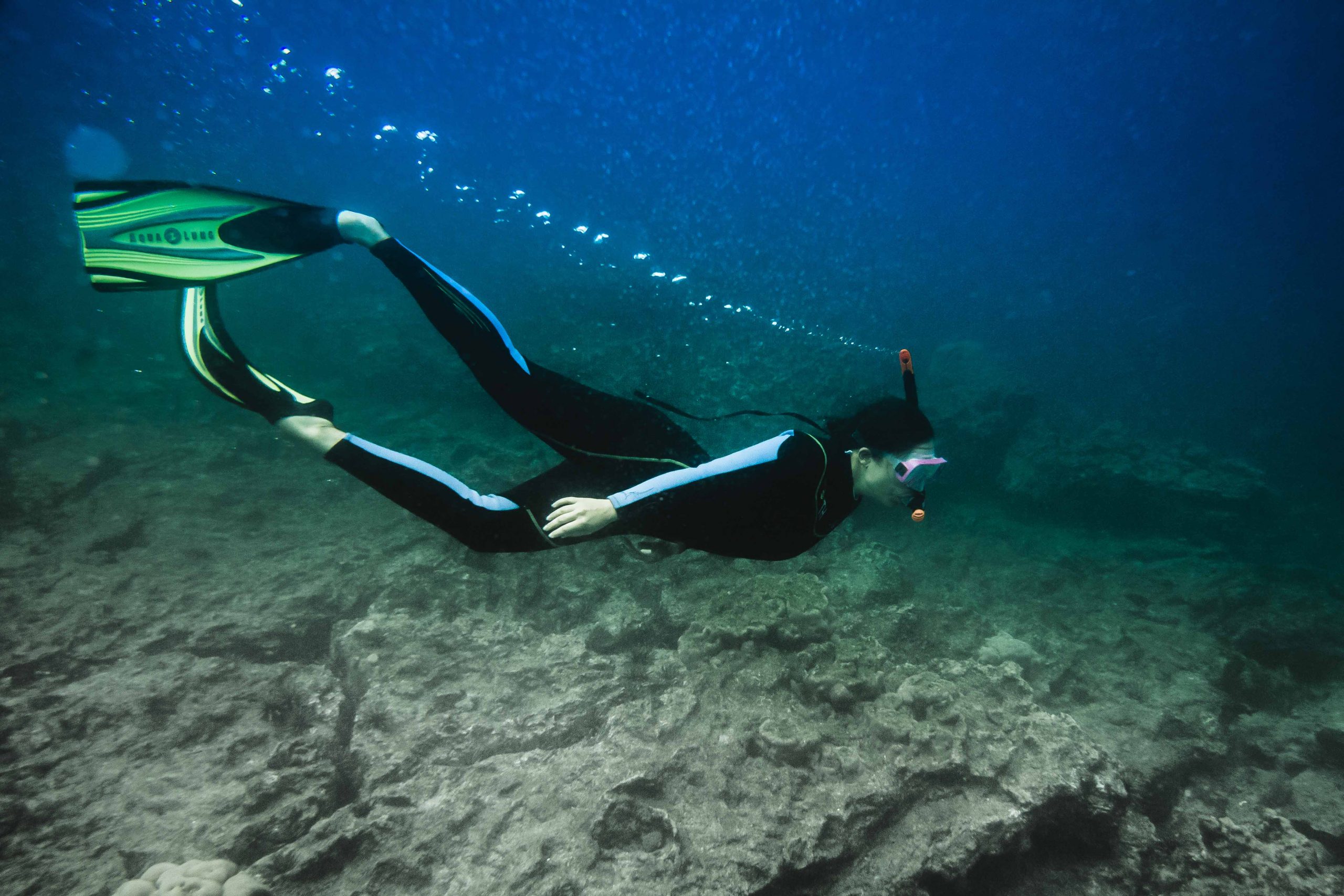 We finish this whirlwind tour through the Galapagos’ finest snorkeling spots with some words from Cecibel Guerrero, one of our naturalist guides, following a recent excursion. Not only is she an incredibly knowledgeable and inspiring guide, she’s also an avid snorkeling fan to boot. It goes with the job.

“The first morning into the water after the pandemic had me all excited – I could not wait to feel it embracing my body. As soon as I was in the water, I saw 5 hammerhead sharks! I yelled to the group to get in quickly, as these sharks tend to be skittish. It was amazing to share this experience with the guests – we saw maybe 40 hammerhead sharks during the snorkel trip that morning and I thought to myself: “I am back where I belong, in this realm where nature is seen at its best.”

If you’re keen to visit these incredible snorkel spots yourself, please do get in touch with the team and we would be delighted to make it happen.