It’s no secret that the wildlife is one of the biggest highlights for anyone travelling to the Galapagos Islands. The pristine environment is a playground for dozens of captivating creatures both above and below the waves, many of which are endemic to the islands and are as curious about us as we are about them.

During 2020, whilst restrictions have limited travel for us, the animals that call the archipelago home have enjoyed a year like no other. Sea lions have been spotted roaming the streets of the larger towns, pods of dolphins have been exploring the harbours and the numbers of cormorants and penguins have both reached peaks not seen since at least 2006.

As we embark on a new year, we have pulled together a round up of several wildlife highlights from 2020.

Penguins in the Galapagos are always high on people’s wish list for sightings, seemingly incongruous as they are in the sun and warmth of this equatorial paradise. Their incredible speed and agility – underwater at least – makes them popular snorkeling companions for our guests. What is more, the penguin species found in the Galapagos is endemic to the region and is the world’s most northerly-occurring penguin; these penguins are the only ones that live north of the equator.

Penguins enjoyed a good year in 2020; recent surveys conducted by the Galapagos National Park authorities in partnership with the Charles Darwin Foundation suggest that penguin numbers have reached a peak not seen since 2006.

In further news, only a couple of months ago guides spotted an incredibly rare white penguin, thought to be the first time such an animal has been seen in the Galapagos Islands. The penguin’s white color is thought to be caused by a genetic condition that causes its feathers – normally black with a white front – to lack color.

Another iconic species forever associated with the Galapagos, Giant Tortoises have also enjoyed a good year in 2020.

Diego, a 100-year old giant tortoise who has played a huge role in saving his species from extinction, was returned to his homeland of Espanola Island after nearly 80 years away.

Diego hitches a lift from a park ranger to his new home. Photo credit: AFP for Gulf News

Diego played a critical role in a breeding program that began in the 1960s when only 15 of his species remained in the wild. After successfully breeding over 2000 tortoises – 800 of which are thought to have been sired by Diego himself – the species is now safe and the program is widely considered to be one of the most successful captive breeding programs ever undertaken.

EcoWatch recently featured a fascinating article about Linda Cayot, a scientist who has dedicated her career to conservation work in the Galapagos and played a huge role not only in the survival of the Giant Tortoise but also several other animals such as land iguanas, as well as campaigns to eradicate invasive species.

The 13 finch species found in the Galapagos will be forever associated with Charles Darwin and his theories of evolution; it was his trip to the islands in the 1830s and his study of the endemic finch species he discovered there that spurred his thoughts on evolution and led to his ground-breaking theories on evolutionary biology. Indeed the finches are still studied as a compelling example of evolution in action, with one study noting that new finch species can evolve in as little as 200 years!

Sadly several of the species, including the Mangrove Finch, are highly vulnerable to extinction due to the existence of a parasite that kills young chicks. Their successful breeding is dependent on a dedicated team of scientists working with the Charles Darwin Foundation, who locate nests and treat them with insecticide to prevent the parasite from doing its worst, whilst also providing additional feed to the young chicks. As the pandemic spread in early March 2020, the team’s activities were curtailed and activities suspended, jeopardizing the hard work completed to date and further putting at risk the survival of these iconic birds.

The good news is that before the conservation was drawn to a halt 14 breeding pairs had been located, an increase on 2019; we can only hope the team can make up for lost time during the coming breeding season to help support the survival of these wonderful birds.

These strikingly vivid crabs are a common sighting on the beaches and rocks of the Galapagos – a truly photogenic species in a place with no shortage of photo-ready creatures. 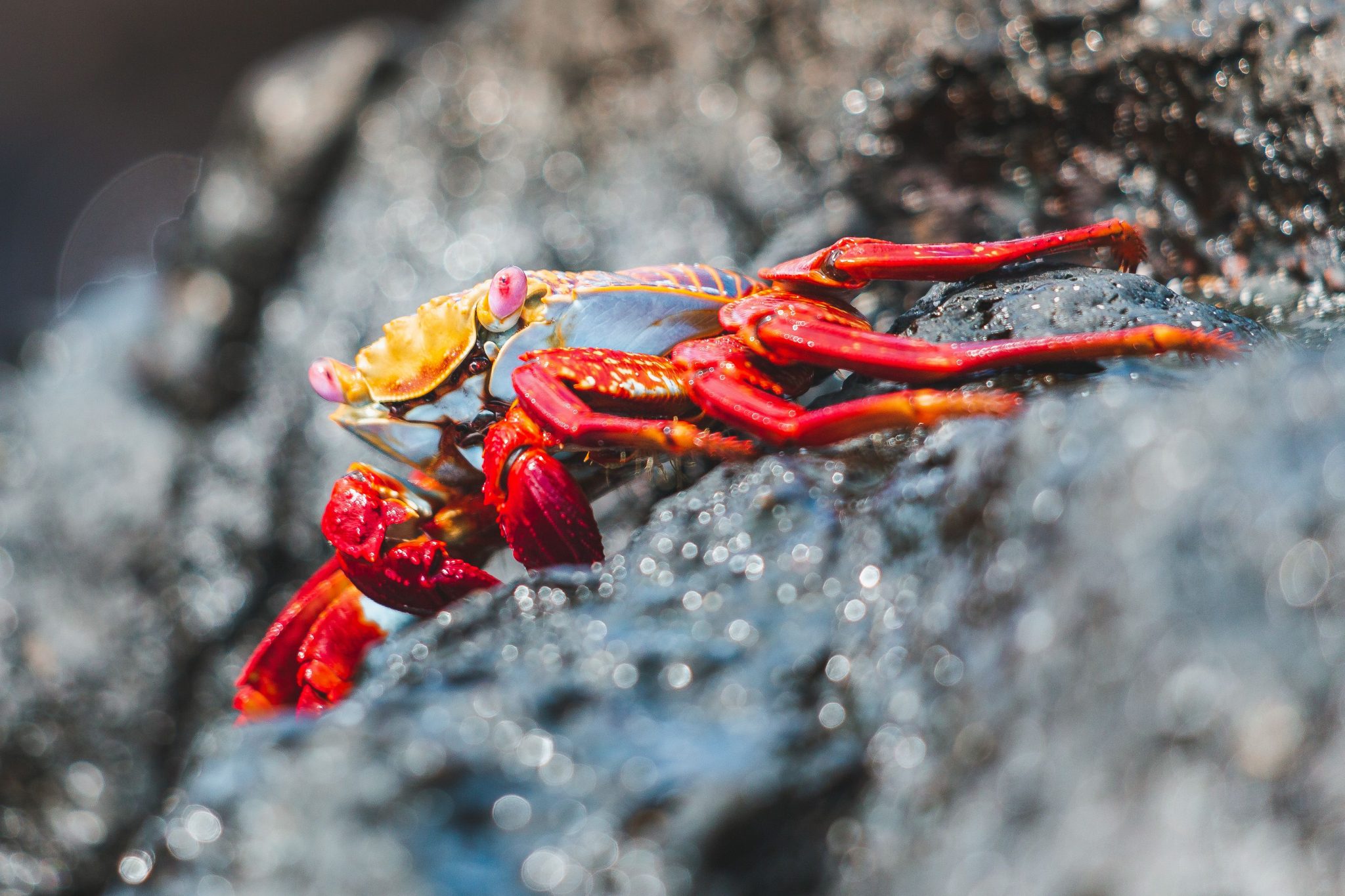 And whilst these crabs are often overlooked in favour of the more charismatic creatures they share the archipelago with – sea lions, penguins, tortoises and blue-footed boobies, for example – one such crab has enjoyed some time in the spotlight after a recent feature in the media.

Several dolphin species roam the waters of the Galapagos, including Bottle-nosed, Common, and Spinner dolphins. Always a popular sighting, these playful creatures often swim alongside our pangas or follow our vessels, diving and jumping as they go.

A few weeks ago, some of our guests were treated to a particularly spectacular show on an early-morning outing; a pod of 150 dolphins on a feeding frenzy just meters from where our yacht Theory had anchored for the night.

Galapagos Conservation Trust (GCT) President Monty Halls recently described the Galapagos Islands as “the last bastion of the whale shark”. Speaking at the GCTs annual Galapagos Day event – held online for the first time in 2020 – Monty was joined by Jonathan Green, founder of the Galapagos Whale Shark Project and a leading expert in the conservation of these magnificent sharks.

The whale shark is one of the most thrilling creatures to see in the Galapagos, and are often seen in the waters around Darwin and Wolf Islands between June and November. These huge fish are the largest anywhere on Earth and can reach up to 18 metres in length – quite a sight when out on a snorkelling trip!

During the Galapagos Day webinar, Monty and Jonathan talked about a whale shark named Hope, who had been tagged by the Galapagos Whale Shark Project but went missing back in May after swimming in to an area of intense fishing on her way from the Galapagos to the Cocos Islands off Costa Rica. Sadly many whale shark meet the same fate, but with the ongoing work of the GCT, the GWSP and many other organisations working to protect the marine life of the Galapagos, we can hope that this extraordinary species can thrive in the safety of the Galapagos for generations to come.

Also known as Darwin’s Flycatcher, these brilliantly colored birds are endemic to the Galapagos. Once found on eight islands, their numbers have dwindled as they are threatened by the same parasites that affect their finch cousins, and they are now found only on Santa Cruz island. To make matters worse, an invasive plant species called Chinese blackberry which spreads across the forest floor makes it difficult for chicks to feed, further threatening their survival. 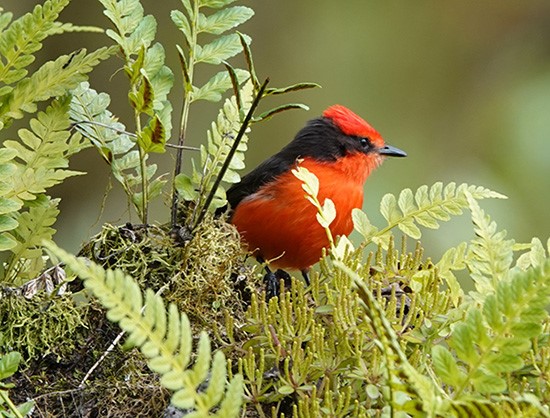 Galapagos Conservancy, in partnership with the Galapagos Park Authorities, are working hard to save these colourful creatures by clearing the non-native species from Santa Cruz island and using insecticides to eliminate the parasite from their nests.

So you see, there may be some reason in quotes like “Change the way you look at things and the things you look at change” – 2020 was challenging in so many ways, but there are silver linings to be found.

FAQs for travel to the Galapagos with Ecoventura