The Galapagos Islands, with its stunning landscapes and picture postcard beaches, fearless wildlife both above and below the waves, world-class snorkelling and diving, and year round sunny weather, means a host of different things to different people. Combined with the gourmet fare and second to none service you’d expect from a Relais & Chateaux luxury cruise, plus a vast array of excursions and on-board activities, there really is something for everyone on an Ecoventura voyage.

But more often than not, it’s the wildlife that brings people to this far-flung archipelago, be it the photogenic sealions and marine iguanas lounging on every beach, the endemic birdlife that call no other place on Earth home and that so fascinated Darwin so many years ago, or of course the sharks, rays, turtles and fishes that live beneath the surface. 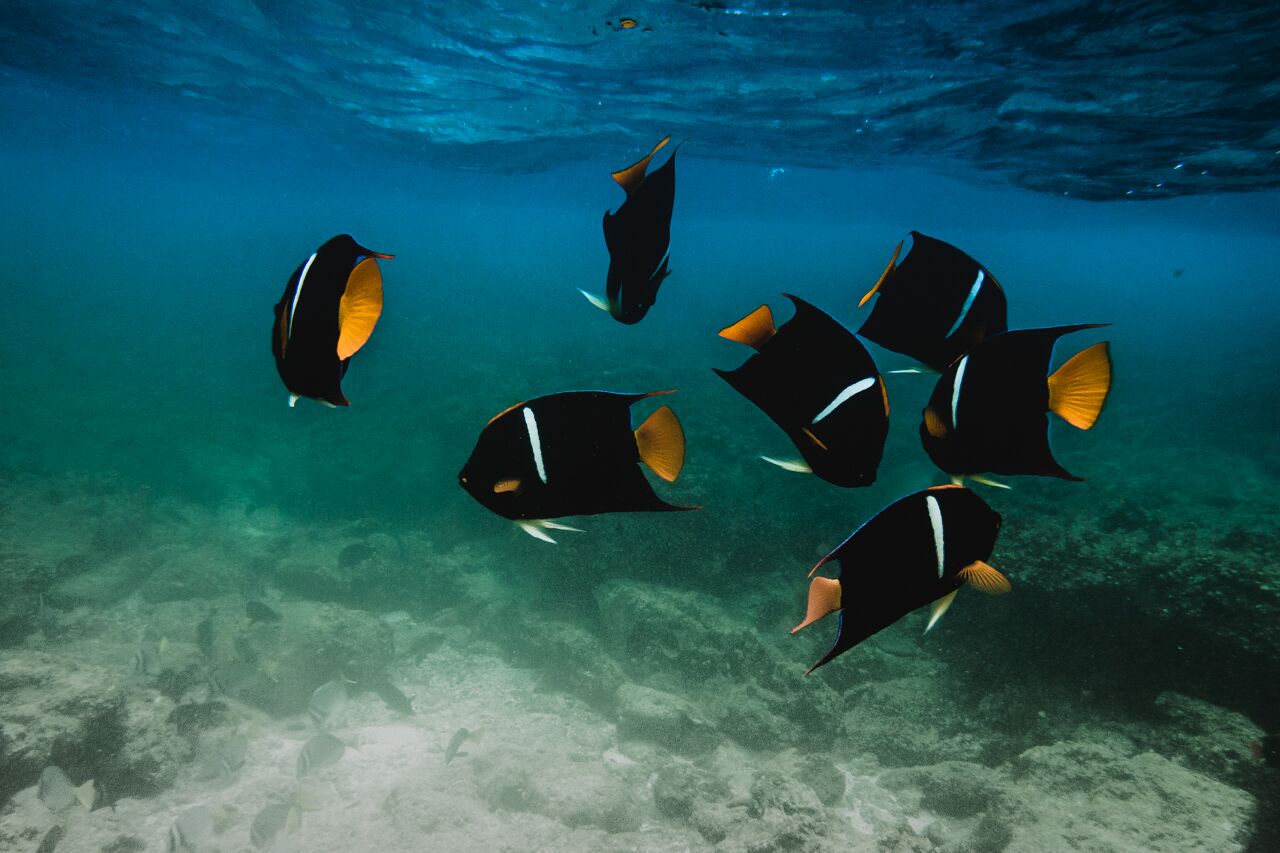 And to help our guests learn all there is to know about all of these amazing creatures, each year we invite world-renowned marine biologist and leading authority on the Galapagos’ marine wildlife Jack Grove to host two departures, to share his enthusiasm and expert knowledge with our guests and share tales of the time he has spent researching and exploring in the region.

In 1997, Stanford University Press published The Fishes of the Galápagos Islands, the culmination of many years of research in the Galapagos by Jack.

Jack is now working on a second edition, so we thought we’d talk to Jack about the inspiration behind his book and his experiences researching wildlife in the Galapagos. 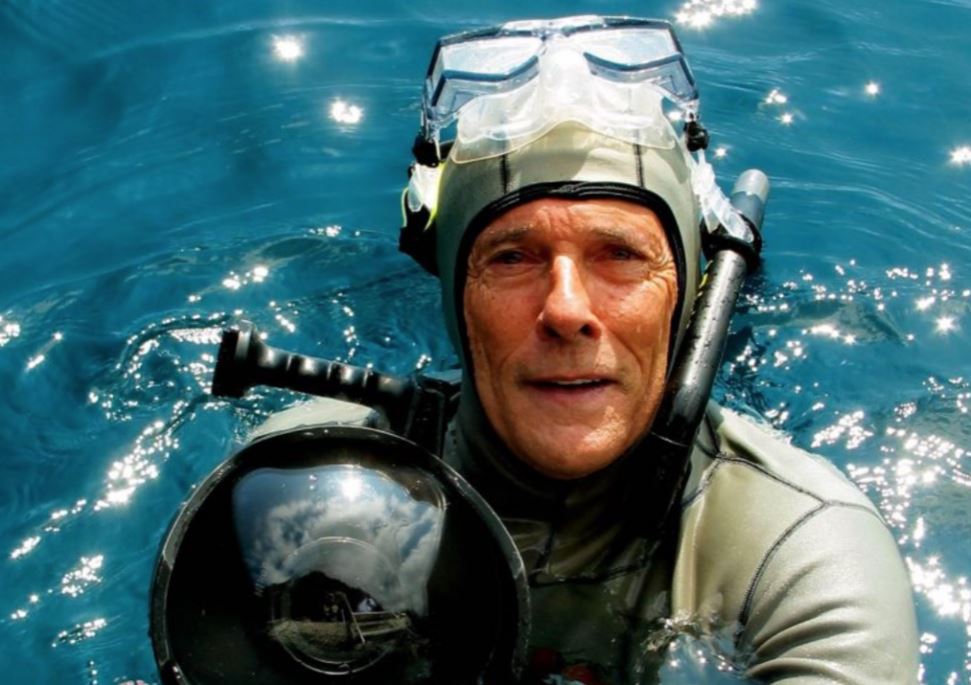 Inspired in equal measure by the writings of Rachel Carson – best known for environmental expose Silent Spring, but also the author of short stories including Under the Sea-Wind about a freshwater eel yearning to explore beyond the pond where she grew up – and the tv programs featuring underwater explorer and researcher Jacques Cousteau, Jack was drawn to the sea from an early age.

“Being raised in a landlocked farming community in southern Pennsylvania did not deter my passion for the ocean. During the summer months, when my family vacationed in coastal Delaware, my Dad taught me to fish for flounder and sea trout. While standing in the surf zone next to him, trying my best to cast my line beyond the breakers, I tried to imagine what it would be like to go beyond that distant horizon.

“My mother bought me my first aquarium when I was 10, with the understanding that we would have only freshwater fishes, because saltwater aquariums were too difficult to maintain. I wanted to understand the difference; why were freshwater fish able to live in saltwater and vice versa? My curiosity about fish and how they extract oxygen from the water broadened.”

Jack’s first trip to the Galapagos Islands was in 1975, receiving an invitation to join a voyage whilst studying at the University of West Florida.

“With a plastic sextant and a seabag full of books in hand, my journey south began. The expedition would not only take me to South America for the first time, it would be my first opportunity to explore the Pacific Ocean.”

As with so many scientists who are drawn to the Galapagos, asking him about inspiration for writing a book about Galapagos fishes it doesn’t take long before Charles Darwin’s famous voyage on the Beagle comes up.

“Darwin visited the Galapagos in 1835 aboard the HMS Beagle, referring to the archipelago as a living laboratory of evolution. When the opportunity for me to visit the islands presented itself, I began a dedicated quest for knowledge about this iconic archipelago. 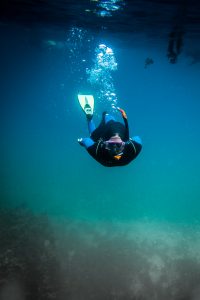 “The young naturalist collected 15 species of fish whilst he was in the islands. All 15 of those species were new to science. I could not understand how it was possible that 140 years later, there was still no book to be found on the fishes of the Galapagos. So I set out to write a popular book covering the 50 most ubiquitous fishes. What better way to learn about the fish fauna of this isolated group of islands than to write a first book on the subject? Knowing that many of the fishes in the Galapagos are found nowhere else, I also became obsessed with a desire to protect them.”

So what was it that led him to working on a second edition? A combination of factors, including the correction of certain classification issues and the fact that the first edition was not widely distributed across Latin America due to its size. The second edition will also be published as an e-book, allowing access to researchers and travelers world-wide.

And what is it that keeps bringing Jack back for more?

“During the last 45 years, I have returned to the Galapagos countless times. My enthusiasm remains undiminished; the ferver is greater than ever before. The gratification I receive through sharing the Galapagos with fellow travellers is extraordinary. And now that work on the Second Edition of The Fishes of the Galapagos Islands is in progress, it is even more fun to share.” 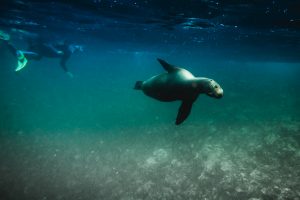 With all the species that Jack has studied, we asked him if he had any particular favorite.

“Reflecting on the thousands of different fish I have observed, photographed and marvelled at, picking a favourite is a challenge! After all, fish are the most diversified group of vertebrates in the world with over 33,000 species.

“One of my favorites was a little grey fish that did not have an assigned common name when I first noticed them in the Galapagos. I was fascinated by how they aggregated with other plankton feeders in specific regions of the islands where upwelling led to cooler nutrient-rich waters rising to the surface. Discovered in 1903 and known only to the Cocos Islands, Costa Rica and the Galapagos, I gave the fish the common name ‘Blackspot Chromis’ because of the distinctive blotch at the axis of the pectoral fin.

“Sadly, sometime after the 1982-1983 El Nino, the Blackspot Chromis was declared extinct, most likely in consequence of the drastic increase in surface temperatures caused by global warming and the associated reduction in productivity of the waters surrounding the archipelago.

“Returning to the idea of favourites, there are only a few brightly colored tropical fishes in the Galapagos, but when you are fortunate enough to encounter them the experience will not be forgotten. For example, the exquisite Moorish Idols, with their elongated dorsal fins (see the photo below) or the elusive Bignose Unicorn, capable of instant changes of color from slate grey to brilliant purple”. 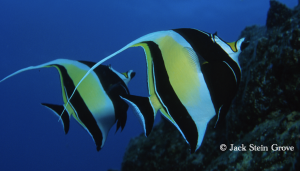 Talking to Jack, it doesn’t take long to recognize the deep love he has for the Galapagos, and the urge to return so often. Combined with a desire to protect the marine species that call the archipelago home, he makes for an inspiring speaker, armed with a breath-taking energy and enthusiasm for these islands he loves so much.

“My desire to learn more about the marine life became more compelling with every free-dive, every fish seen and each image I captured on film. Perhaps more importantly, there was a determination germinating within to do something to help preserve this paradise.”

So does he have any particularly memorable experiences of his time in the Galapagos?

“It has been said the jewel in the crown of the Galapagos is Fernandina Island. It is the westernmost island of the group, and the island I was most looking forward to visiting. There was a steady breeze that morning late in June, 1975, when our 52-foot ketch the Alsanal Too rounded the north-western tip of Isabela under full sail. We had just crossed the equator and I caught sight of Fernandina for the first time.” 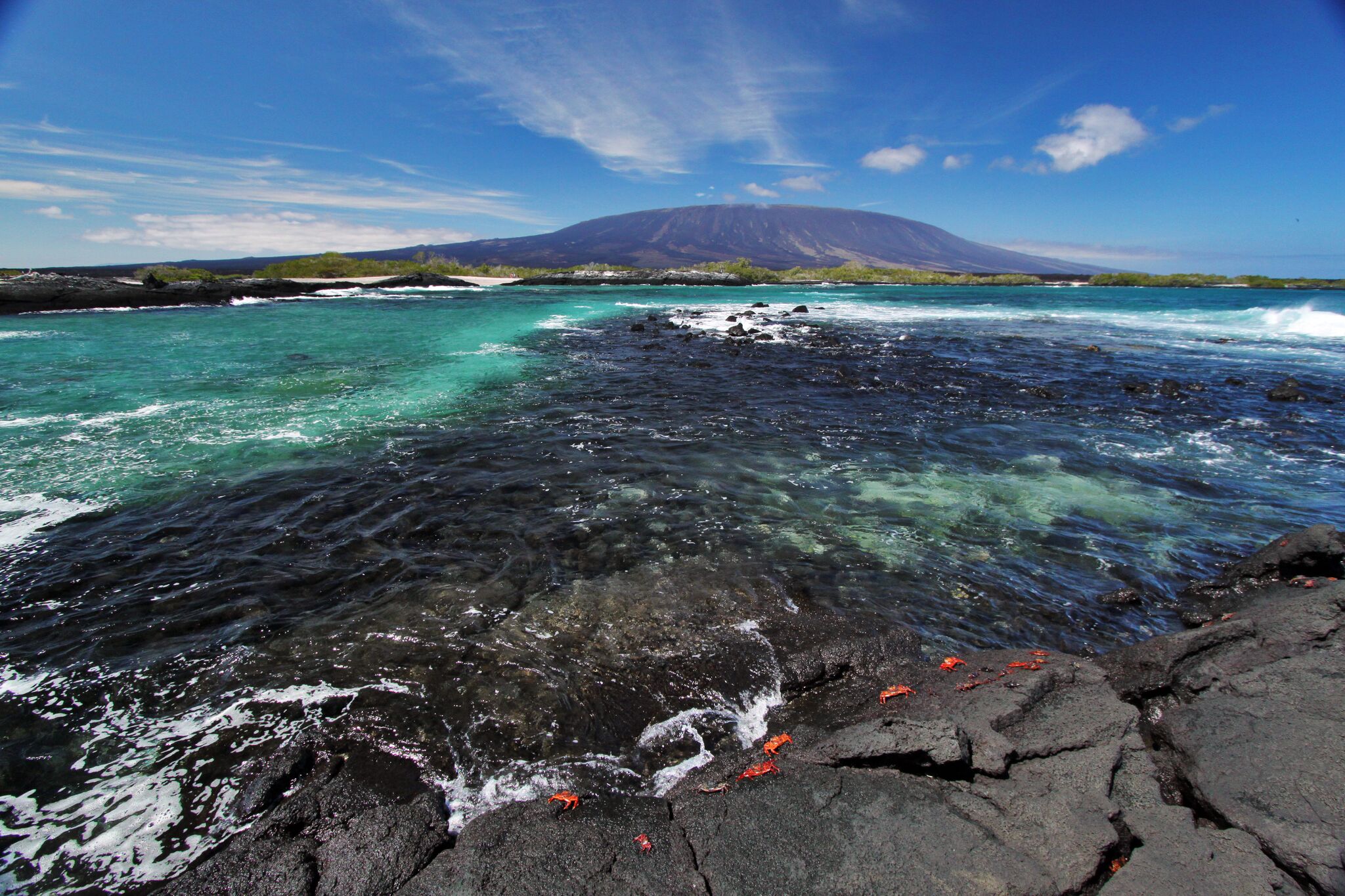 Given events so far in 2020, Jack will sadly not be hosting departures this year. But he will be back and keen to make up for lost time! Please feel free to contact the team via our website or email for more information, and in the meantime we leave you with Jack for some final words:

“It is gratifying to know that I will one day soon be back in the islands as a naturalist and guest lecturer with Ecoventura. It is such a joy to share my research with fellow travelers, in the water whilst snorkelling and during discussions over dinner and evening recaps, so please come and join me aboard”.