There are several active volcanoes in the archipelago, rising out of what is known as the Galapagos Platform, a submerged lava plateau that creates the shallower area surrounding the islands. This plateau is a stationary hot spot – an area on the Earth’s surface over a mantle plume where particularly hot magma rises through the Earth’s thin crust, causing widespread volcanic activity and leading to the formation of multiple volcanos that scatter the islands. 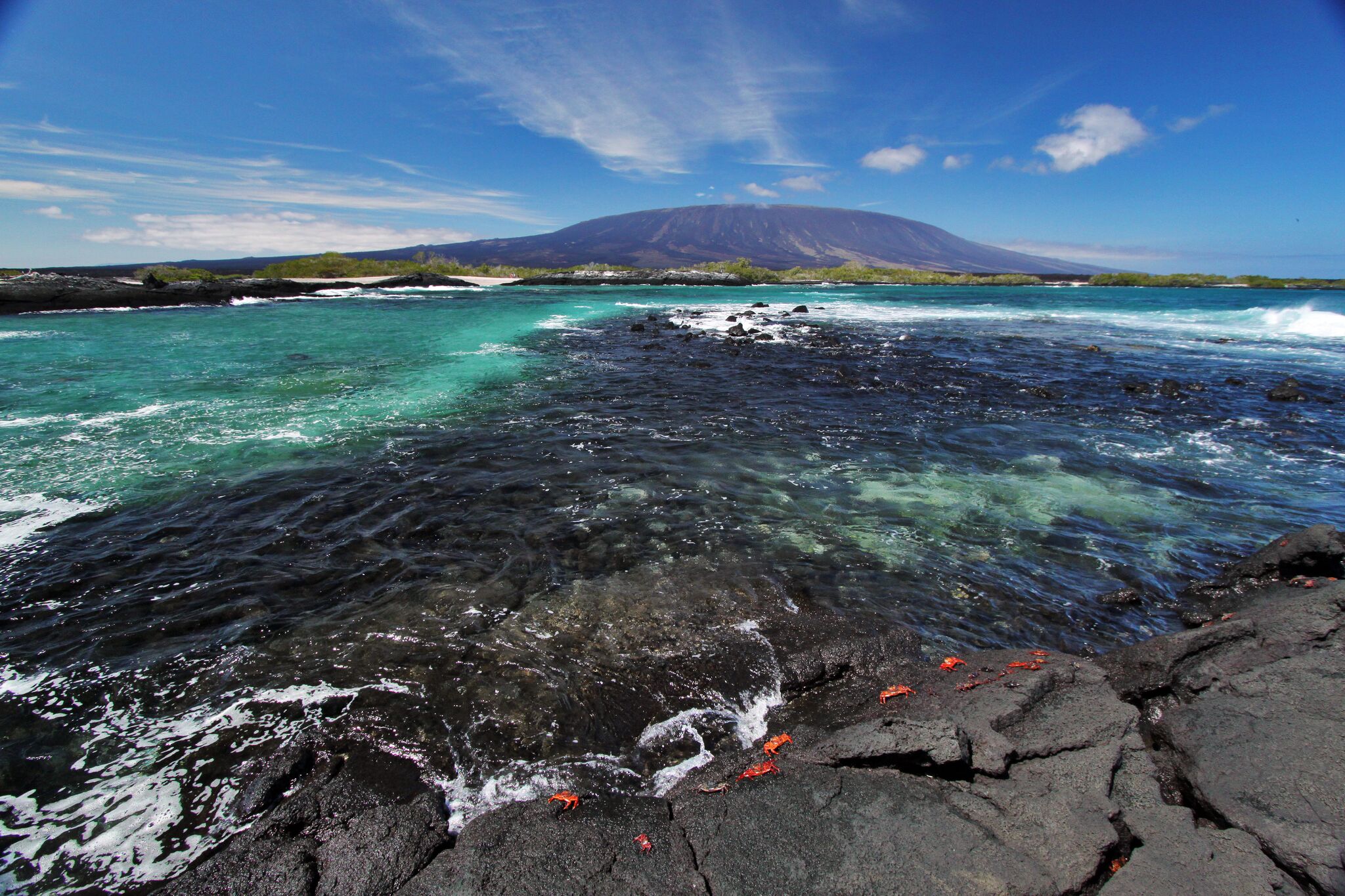 As a result, volcanic activity is common in the Galapagos, with several notable eruptions in recent years.

Topping the list is Wolf Volcano, which erupted in spectacular fashion in the early hours of January 6, 2022. Located on Isabela Island, the eruption spewed red hot lava down its flanks, creating a lava flow stretching for miles. 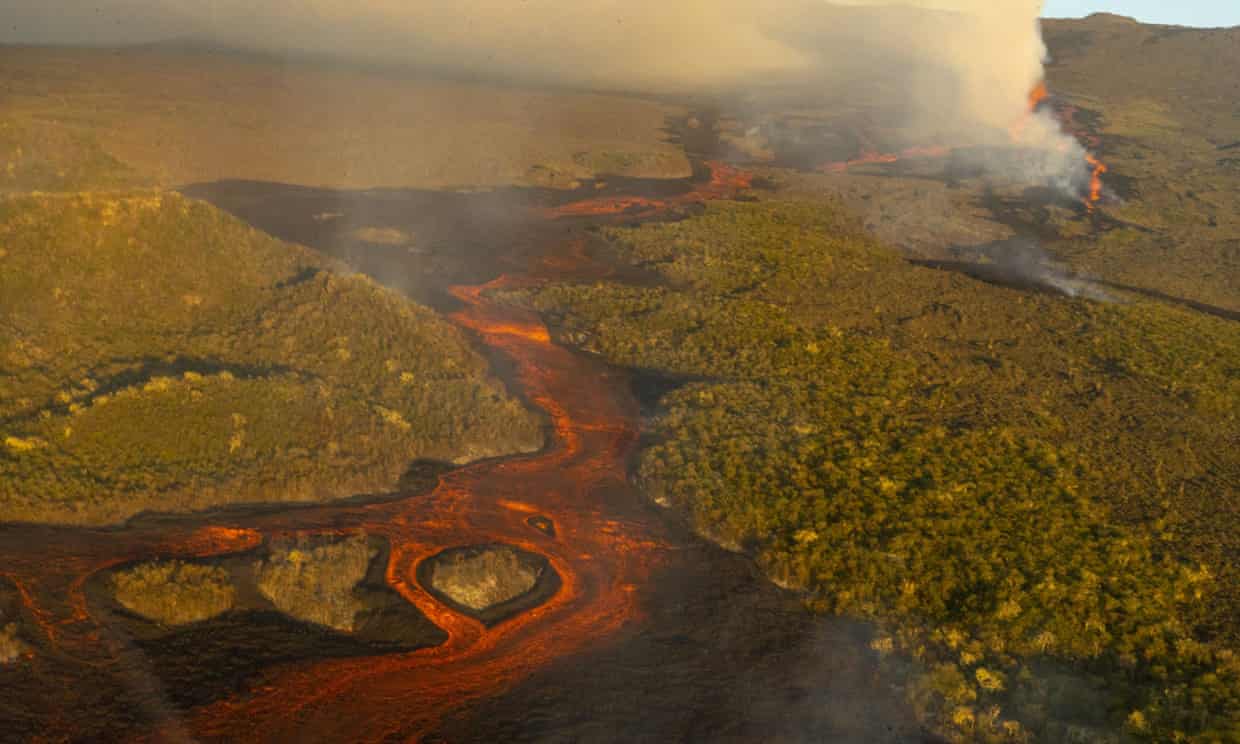 The volcano last erupted in 2015, and thankfully this latest one doesn’t pose a risk to humans or the native local species resident on the island, in particular the famous pink iguanas that call it home. 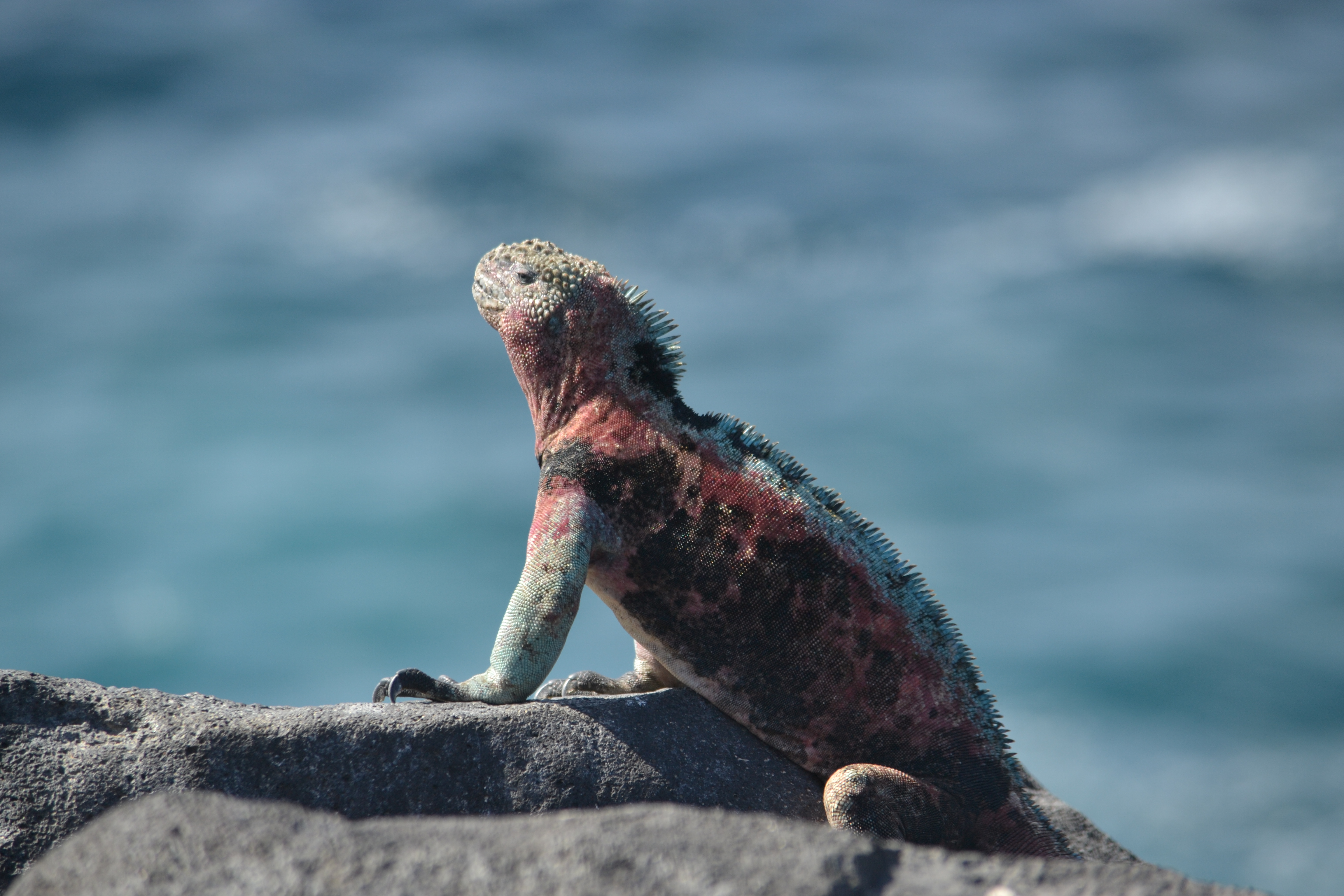 Ecuador Ministry of Environment personnel captured aerial footage of the red hot lava flow snaking through the forests in the south of the island, as reported in this video shown by CNN. 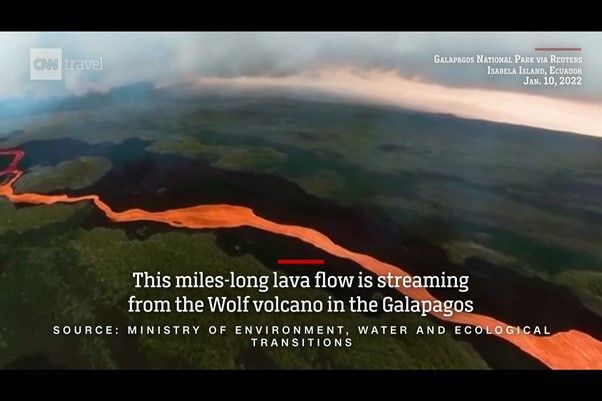 Guests on our luxury expedition yacht Origin fortunate enough to have been sailing at the time of the eruption were able to see breathtaking views of the volcano close up.

Captain Perez sailed close to the Isabela Island shore, timing the arrival for the evening so that passengers could see how the volcano lit up the night sky. Not your typical Galapagos view, but quite a sight for anyone lucky enough to be there!

In the words of one of those lucky passengers: “Our captain took the ship 2 hours out of its way so that we could get a good view of the volcano that started erupting on Isabella, necessitating a longer night time navigation for him and his first mate. When you add the almost unbelievable geology and wildlife of the Galapagos Islands to the outstanding ship and crew, it was magic!”*.

Wolf is not alone. Whilst the Galapagos is famous for its incredible wildlife and biodiversity, it also hosts regular volcanic activity. In 2005, and again in 2018, fissure eruptions emanated from Sierra Negra volcano on Isabela Island. Lava sprayed out to heights of up to 2 km, forming huge lava flows and ash plumes, and even expanding the coastline in the southern part of the island.

La Cumbre on Fernandina Island is considered the youngest and most active of the Galapagos volcanoes. To live up to its reputation, eruptions have occurred in 2017, 2018 and again in 2020, spewing out lava fountains, lava flows that reach the sea, and gas clouds climbing to three kilometres in height. 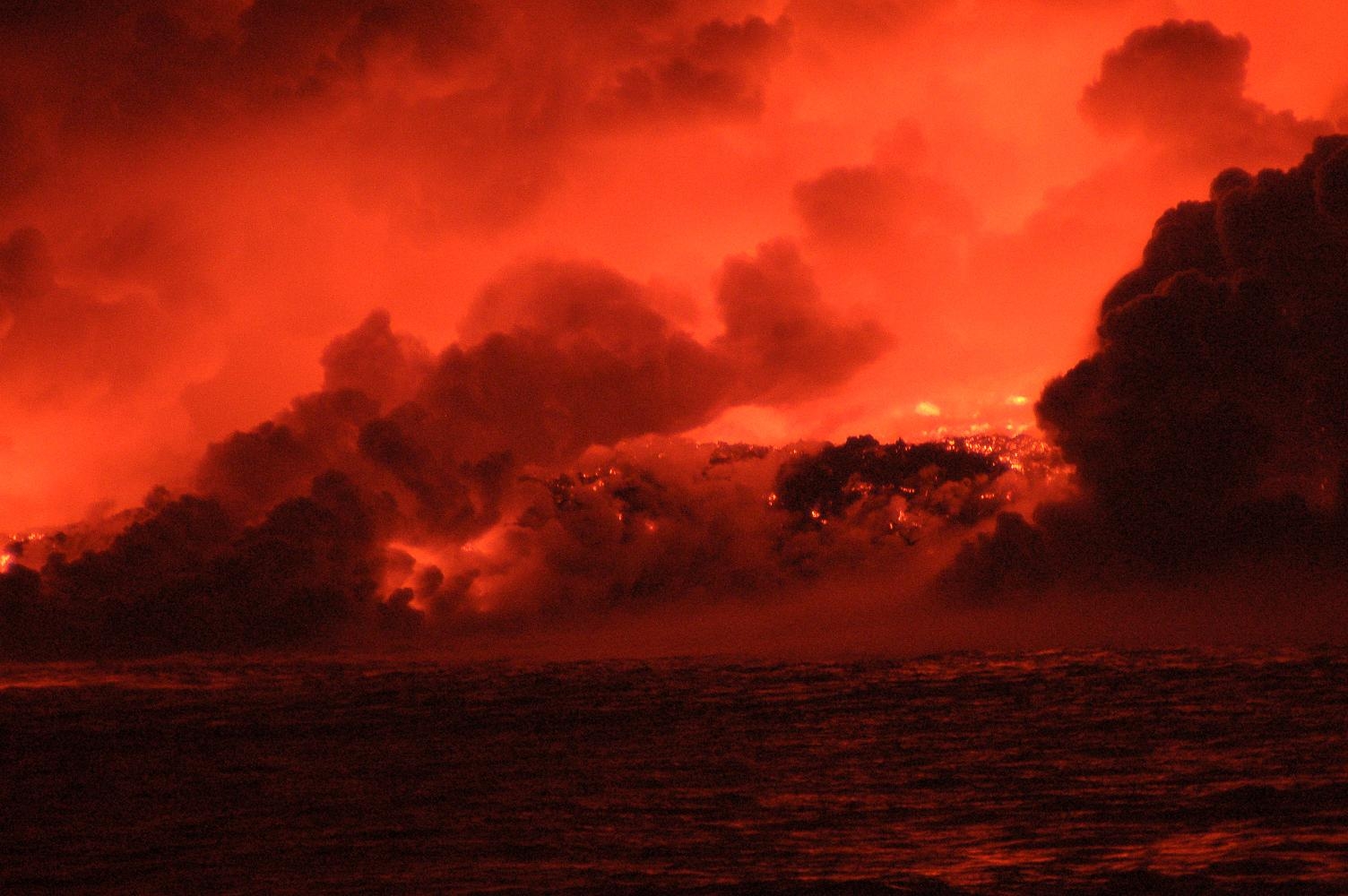 Cerro Azul, another shield volcano on Isabela Island, joined the party in 2008, and has had eruptions roughly every 10-20 years for the last century. Lava flows spreading across the island reached 6 miles in length, and previous volcanic activity from Cerro Azul has even led park rangers to rescue endangered tortoises by helicopter to prevent them from caught in the red hot flows.

The volcanoes of the Galapagos are best seen on itinerary B – one of our two week-long voyages, known as “Volcanic Wonders”. Offering wonderful views of many of the archipelago’s most well-known volcanoes, including Wolf Volcano and La Cumbre, it’s the perfect way to see the incredible volcanic features that make up the Galapagos Islands, not to mention its wonderful birdlife and aquatic creatures that the region is so famous for. 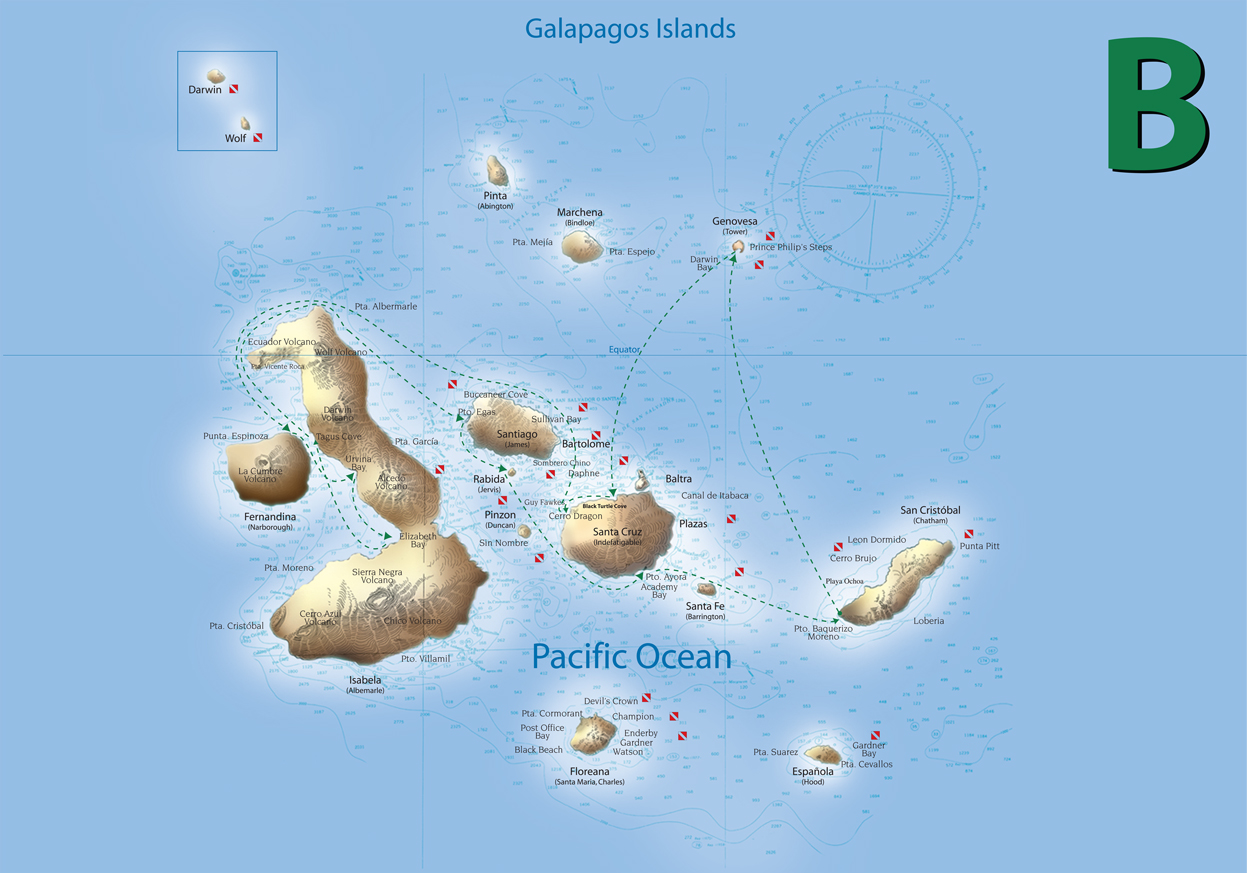 If you would like to visit the Galapagos for yourself to see the fascinating volcanos that scatter the islands, get in touch and our team would be happy to assist!

*This review was submitted to WendyPerrin.com, a journalistic travel-advice website that offers personalized trip recommendations, as well as Wendy’s WOW List of road-tested trip planners. Visit Wendy’s site for all the info.

Quite the stopover - pre-Galapagos itineraries in Quito and Guayaquil