The Galapagos National Park and Charles Darwin Foundation have done immense work on setting in place regulations that protect the wildlife and start rebuilding the eco system here in the Galapagos. For the past 10 years, Ecoventura has been partnering with, and supporting these organizations in an effort to further their projects.

Knowledge is a huge part of the battle. Educating both locals and tourists on the importance of sustainability and what each individual can do to make a difference is vital to the success of these organizations. The unique wildlife of the Galapagos is threatened by introduced species, humans, tourism and other climate factors, all which we are working to find a sustainable solution for. We’ve listed only a handful of the animals below that are on the endangered species list, why they are important and how they are being threatened.

The current projects that are aimed at conserving the Galapagos arent focused on specific wildlife, they are centered on entire islands. They want to eradicate the invasive species and restore the habitat for all of the wildlife on each island, but it takes time.

These are some of the most well-known and sought after animals for guests who come to the islands. Together we need to help educate and support these organizations as they work every day to save the flora and fauna of the Galapagos. 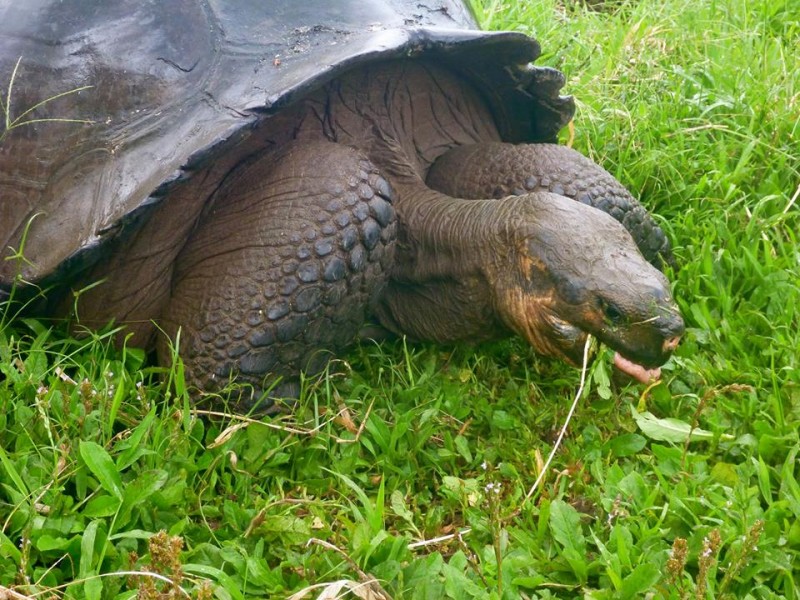 The Giant Tortoise is the largest living specie of tortoise and an iconic symbol of the Galapagos. With a lifespan of on average 100 years, these are also the longest living animals. They are herbivores, eating mainly cactus pads, grasses and fruits. Recently new studies have come out documenting that the tortoises are spending more than half of their diet on non-native fruits, luckily due to the fruits larger size and smaller seeds these introduced species have been compatible with the tortoises.

Also in big news, the first baby Pinzon tortoise was born in the Galapagos Islands in 100 years. They believe this was made possible by a project started in 2012 to eradicate the black rat living on Pinzon Island.

Threat: Introduced species such as dogs and cats that eat the young tortoises, in addition to cattle that compete for their grazing areas. 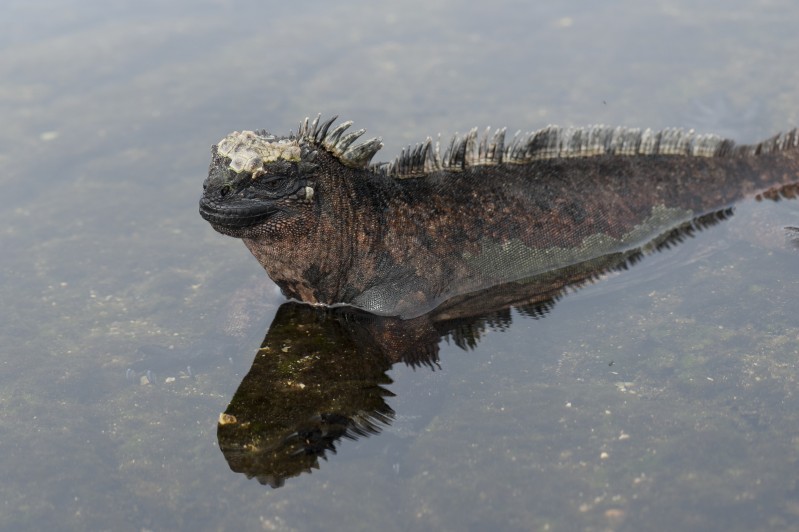 These iguanas are the world’s only oceangoing lizard. The Marine Iguana can dive over 30 feet in the water, but can only spend a limited time in the water due to temperature. Once out of the water, their dark color allows them to rapidly absorb the heat. While clumsy on land they are graceful swimmers and feed mostly on underwater algae and seaweed.

Threat: They are affected by climate change. As the sea levels and air temperature rise Marine Iguanas are unable to regulate their body temperature while on land. Egg development is also affected with the change in temperature. 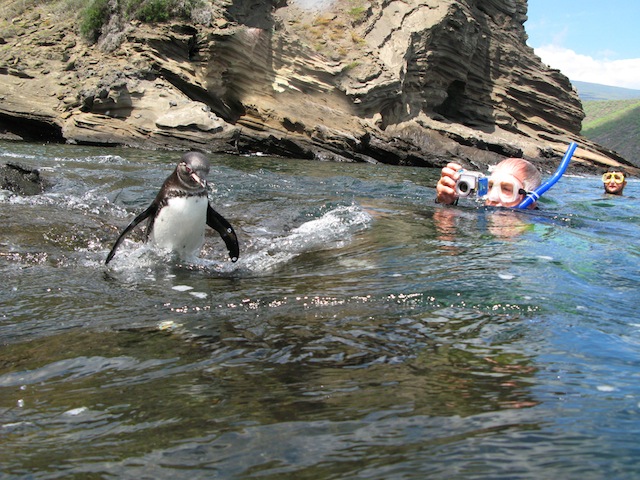 This is the only penguin species found north of the equator in the wild and the rarest. It survives due to the cool temperatures resulting from the Humboldt Current and Cromwell Current. The Galapagos Penguin is the second smallest species of penguin and found mainly on Fernandina Island and Isabela.

Threat: Pollution, bycatch and climate change are all threats to Galapagos Penguin. Also, because of their size they have numerous predators. Larger animals both on land and in the ocean prey on this small penguin. 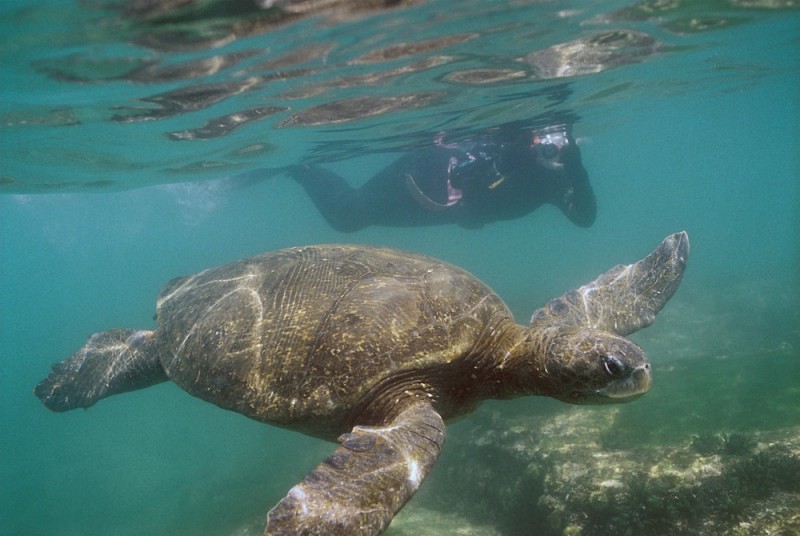 The green turtle grazes on seagrass and algae, which helps maintain the seagrass beds and keeps them more productive and healthy. They aren’t named after the color of their shell which is usually brown, but the green color of their skin. The most dangerous time of a green turtle’s life is when it makes the journey from its nest to the sea. Multiple predators are waiting to prey on hatchlings during this short journey.

Threat: The green turtle continues to be hunted and its eggs harvested, much of this is for human consumption. 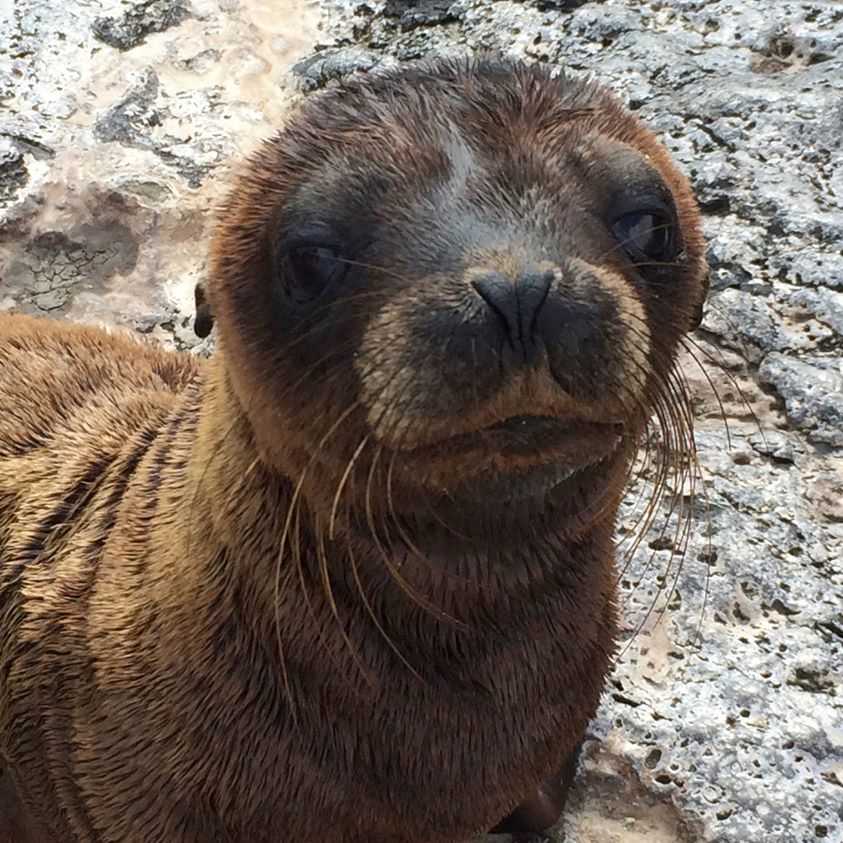 The sea-lion is the most common mammal in the Galapagos. They are often seen sun bathing on the beaches of the Galapagos and their playful nature makes them one of the favorites from travelers.

Threat: Introduced species that carry diseases can spread to sea lions. They are victims of bycatch in fisheries and can be vulnerable to the effects of climate change on ocean currents impacting their food source. Sharks and Killer Whales are sea lions main predator. 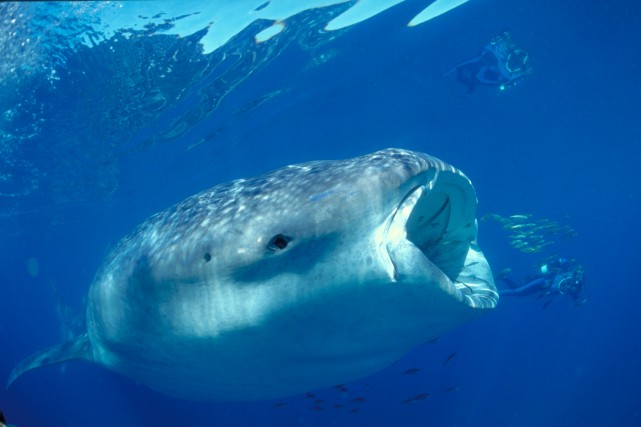 Whale sharks are the largest fish and shark in the world with a mouth opening of five feet wide. They are gentle giants that feed on plankton and usually travel alone, but they are known to congregate in large groups near areas where there is a high amount of plankton available. Between June and September whale sharks are usually seen near Darwin Island and Wolf Island. We are still learning a lot about the whale shark’s migration patterns and the importance of the Galapagos in their community. You can follow along with the Galapagos Whale Shark Project as they discover new insights on these gentle giants.

Threat: Whale shark’s meat, fins and oil is highly valued on the International market. In addition to illegal fishing, unregulated whale shark tourism has a risk of becoming a threat. It interrupts their feeding and some sharks get injured by the boats.

Leatherback turtles are the largest sea turtle and one of the most migratory, crossing both the Atlantic and Pacific Oceans. They consume large numbers of jellyfish which help to keep populations of these organisms in control. They are a big draw for coastal communities for tourism and a vital source of income in these towns. Leatherbacks can dive to depths of 4,200 feet, deeper than any other turtle, and can stay down for up to 85 minutes.

Threat: Hundreds of thousands of sea turtles a year are accidentally caught in shrimp trawl nets, on long line hooks and in fishing gillnets. Sea turtles need to reach the surface to breathe, and therefore many drown once caught. Also due to coastal development and other human activities their habitats are being destroyed or disturbed. 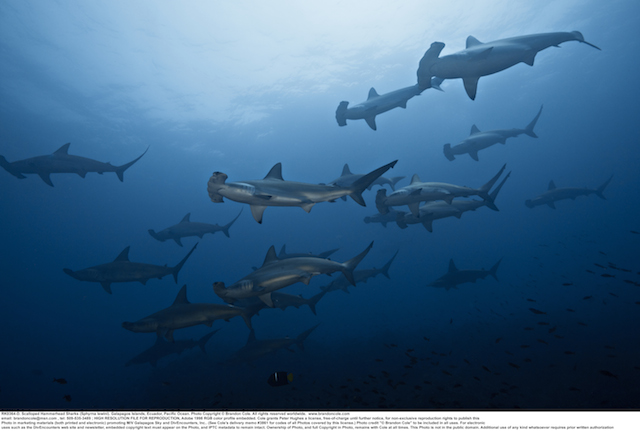 Scalloped hammerheads are seen often in large groups at Darwin Island and Wolf Island, with an occasional sighting at other snorkeling sights around the Galapagos. You can distinguish a Scalloped Hammerhead from its relatives by the scalloped front edge of their hammerhead-shaped head. Their diet can consist of fish such as sardines and mackeral, in addition to stingrays and squid. You are most likely to see a scalloped hammerhead in the Galapagos in January.

Threat: These sharks are targeted by commercial and illegal fisheries for their fins.

Other Articles on how you can play a role in supporting conservation in the Galapagos.

6 Ways to Green Your Next Vacation

Supporting Conservation in the Galapagos

35 Simple Ways Travelers Can Save the Earth

35 Simple Ways Travelers Can Save the Earth