Galapagos is known for its unique ecosystem, one that has been formed by natural events such as El Nino. These natural events are expected and have continually changed the climate over the years. 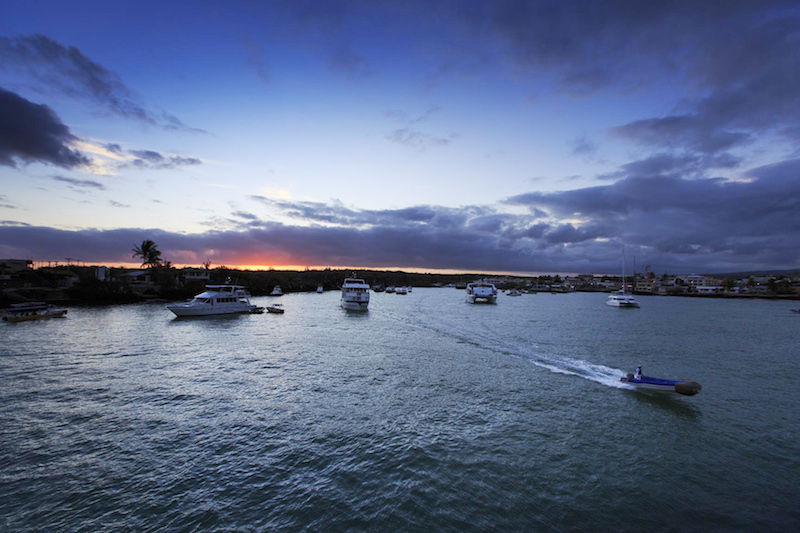 What is El Nino?

The Humboldt Current is the cold nutrient rich water that typically flows into the Galapagos waters, but without the trade winds to pull the warm water to the west this current doesn’t reach the Galapagos and the ecosystem suffers.

How does El Nino affect the Galapagos?

While El Nino is expected every decade, no two El Nino events are similar, making it impossible to predict how the Galapagos Islands will be impacted.

The disruption starts in the ocean with the marine life that depends on The Humboldt Current to bring in nutrient rich water. The fish and algae slowly die off from lack of nutrients, which impacts the sea birds that eat those fish, leaving them without food to give to their young.

The large algae beds are the marine iguanas and sea turtles main food source, so as these die the animals are left in search of food.

Wildlife such as sea lions, sharks, fish and birds are found searching for food in new places. Visitors who come during an El Nino will spot animals in places they may typically avoid. With the scarcity, the animals also have a tough time breeding during these months, especially the Galapagos Penguins and Flightless Cormorants.

The plants usually thrive during El Nino due to the increase in rainfall. This same rain can also cause flooding, although rare in Galapagos. Land iguanas and tortoises also thrive in this lush environment, as do the land birds, such as Darwin Finches, Galapagos Doves, Mockingbirds, Warblers and Hawks.

Why are scientists talking about El Nino 2015?

According to the US National Oceanic and Atmospheric Administration’s (NOAA) Climate Predication Center, the El Nino weather arrived earlier this year in March as predicted, but it arrived much weaker than expected and almost six months late. The latest predictions are suggesting this Summer’s El Nino weather could be one of the strongest on record and will have a significant impact on the climate across the world.

NOAA updates its forecasts on the 2nd Thursday of each month, if you want to follow the El Nino updates you can continue to check their site with the link below.

Galapagos Conservancy points out how scientists are using the Galapagos to measure the adaptability of the Islands to climate change and how these natural events are affecting vegetation, ocean temperatures and sea level changes.

Are you visiting the Galapagos during these months?

During El Nino, waters will be significantly warmer from May through December. You can expect conditions that are similar to earlier in the year (March/April) in terms of weather and wildlife. These earlier months are a great time to visit the Galapagos and you do not need to worry about it impacting your trip.

Depending on when you arrive and the strength of El Nino, you will see first-hand the impact that these natural events have on the Galapagos. It will be a learning opportunity as you watch historic climate changes happen. We encourage you to start the conversation with your naturalist guide so you can understand the changes the Islands go through during this time.

If you have any specific questions about your upcoming trip please email us direct at sayhello@ecoventura.com

The Truth About Traveling on a Galapagos Cruise