What does it mean to plan the best Galapagos Itinerary? 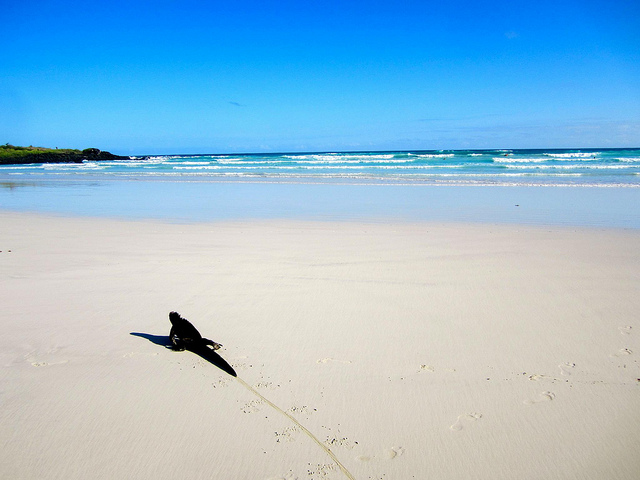 It means you get to see as much diversity as possible. It means you get up-close with endemic wildlife that you can’t find anywhere else on earth. You will hike on different landscapes with the terrain will changing from lava rock to red sand. One minute you will be kayaking, the next snorkeling. Each island is unique, and by picking the best itinerary you will get to experience all of it!

We have worked hard to provide two of what we consider to be the best itinerary’s in the Galapagos. Both itineraries offer an equal number of visits and activities throughout the week and were designed so that you get to see all the wildlife Galapagos is famous for. In terms of wildlife, there is just one exception; only on A you can see the Waived Albatross and only on B you can see Flightless Cormorants. Come back next week on the blog to find out the must see wildlife while you are in the islands. 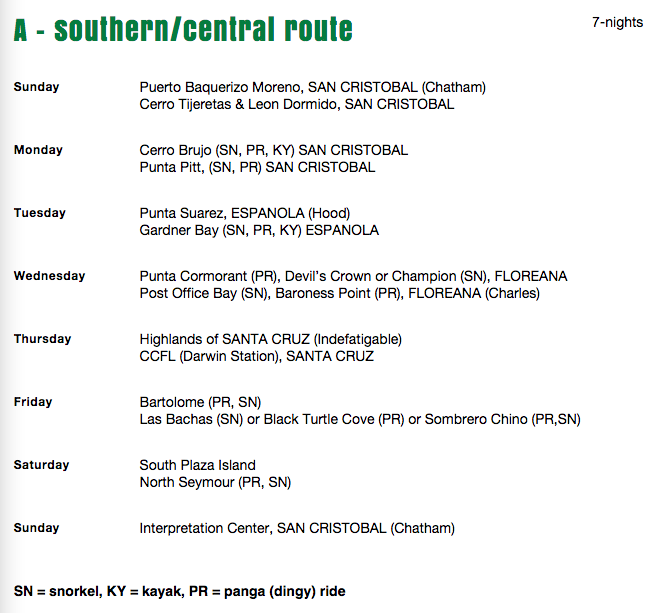 Each island offers unique landscapes, and wildlife, and when combined together can create an unforgettable trip!

You’ve most likely seen photos of Leon Dormido, or Kicker Rock, a tuff cone rising 500 feet out of the ocean, it is one of the most well-known rocks in the Galapagos. In addition to visiting Kicker Rock off the coast of San Cristobal you can also hike to Cerro Tijeretas  or “Frigatebird hill” for spectacular views of kicker rock to the west and shipwreck bay to the south.

Next you can swim with sea lions at Cerro Brujo, one of the most spectacular white coral beaches in the Galapagos with turquoise water. Punta Pitt, a tuff formation that serves as a nesting site for sea birds and is the only site in the islands where you can see  all three boobies and two species of frigate birds nesting together. Punta Pitt is considered to be similar to Genovesa Island in terms of bird watching.

Espanola is the southernmost island and home to thousands of Waved Albatrosses during the months of April to December. On Espanola you will find the highest rate of endemic species in the Galapagos.  Other endemic wildlife you will see include the Galapagos Doves, Galapagos Hawks and Galapagos Finches. Gardner Bay will welcome you with large colonies of sea lions and a beautiful diversity of sea life while you snorkel.

Floreana is one of the few populated islands in the Galapagos, here most of the locals make their living from farming. You are welcomed by a green-sand beach from the olivine crystals and the pinkest flamingos in the world.

You can spend the afternoon snorkeling at Devil’s Crown, a shallow sunken volcanic crater, alive with colorful fish, coral, eels, sharks and more. Be prepared for strong currents at Devil’s Crown, the water can be rough.

Post office bay is another famous site in the Galapagos that has a history behind it. In the 18th century a post barrel was put up and used by English whaling vessels.Traveling seamen would leave addressed letters in the barrel and hope that the next seamen to come along might be headed in the direction of their letters’ destinations.  Many guests still leave postcards and pick up cards from their hometown to hand deliver. 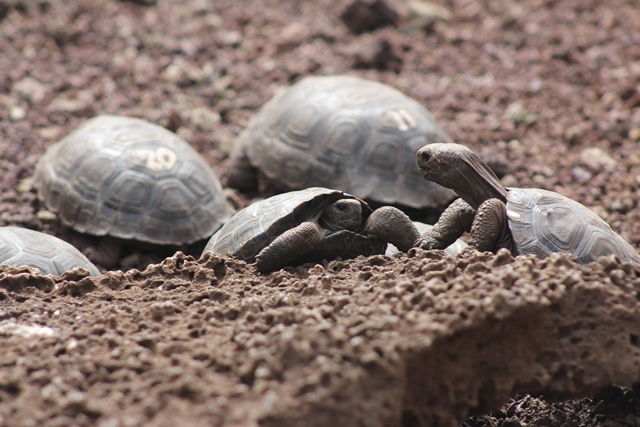 By spending the day on Santa Cruz, you can experience all 7 vegetation zones found in Galapagos.

Visit Las Primicias in the highlands, where you will encounter giant tortoises in their natural habitat. On the same property you can explore lava tubes, formed by surface lava cooling and solidifying, while hot lava continued to flow under the surface, leaving an empty cave.

You will feel as if you have entered a different world when you visit Los Gemelos “The Twins”, a pair of large pit craters that are sink holes created when magma chambers collapsed from tectonic shifts.

When  you visit the Charles Darwin Research Station you will see first hand the breeding center with new hatchlings and miniature tortoises. With a team of over 100 scientists, educators, volunteers and research students they work hard to conduct scientific research and environmental education for conservation.

End your trip here in Santa Cruz by walking the streets of Puerto Ayora, the social heart of the islands with the largest population of 24,000.

Bartolome is a young island off the coast of Santiago and inhospitable to most plants and animals. This island is known for the famous Pinnacle rock, an eroded tuff cone. You can either swim and snorkel around Pinnacle rock, or hike the volcanic cone and get spectacular views from up above. If you do choose to snorkel in the crystal clear waters below, you can expect to swim with the Galapagos Penguin, they are commonly sighted here.

North Seymour is one of the most popular islands for breeding grounds for sea birds and will ensure that you see large groups of frigate birds showing off their gular sac. North Seymour was created by a seismic uplift, instead of being of volcanic origin like most of the other islands. This flat landscape is covered by bushy vegetation and it’s cliffs are a great place to see seabirds perched.

Santiago is a popular tourist site for visitors and the fourth largest island in the Galapagos. The blackened beach of puerto egas is lined with lazing sea lions. Be on the look out at low tide for marine iguanas feeding on exposed green algae.

200 meters off the coast of Santiago is Sombrero Chino or Chinese Hat, named for its shape. Here you can hike over  the volcanic rubble and cracked lava exploring the lava tubes. You can also snorkel in beautiful water in hopes of swimming with penguins and sea turtles. 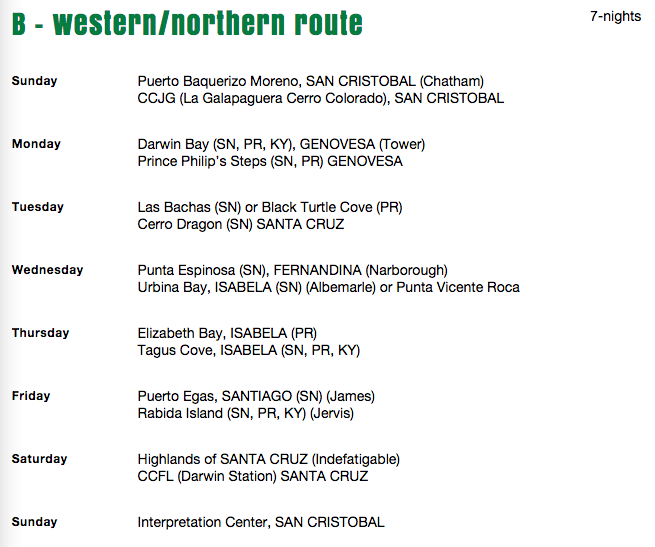 Formed from the eruption of a shield volcano and the eventual collapse of one side of the caldera. One of the most spectacular islands in the Galapagos for bird species is Genovesa. You will hike past numerous male Great Frigate Birds as the display their large red pouch to attract a female as they fly above

When you first arrive at Prince Philip’s Steps you will climb a steep stairway that begins on rocks and leads through colonies of sea birds. After a refreshing hike you can enjoy snorkeling along the cliffs at Prince Philips Steps at Darwin Bay. This is nutrient rich water so you can expect to see plenty of marine life. Numerous shark species are known to be seen in the area, specifically hammerhead sharks.

Being the youngest and most pristine island, Fernandina is not home to much plant life, and has mainly a rocky surface. It is the most volcanically active of the islands and sits at the center of the hot spot that created the Galapagos Islands. As you explore, you will be able to see recent lava flows across the coast.

The island is set apart from the others because it has no introduced species of mammals.  A few highlights of your visit will be the flightless cormorant nesting site and the largest colony of marine iguanas in the Galapagos basking in the sun.

Isabela is the largest and youngest island in the Galapagos. After the 1954 uplift when the volcano erupted, you are now able to see coral skeletons, some waist-high. It is still one of the most volcanically active islands in the archipelago. Hikes on Isabela will take you to beautiful views of lava fields and past the Galapagos Flamingo wading in the lagoons. 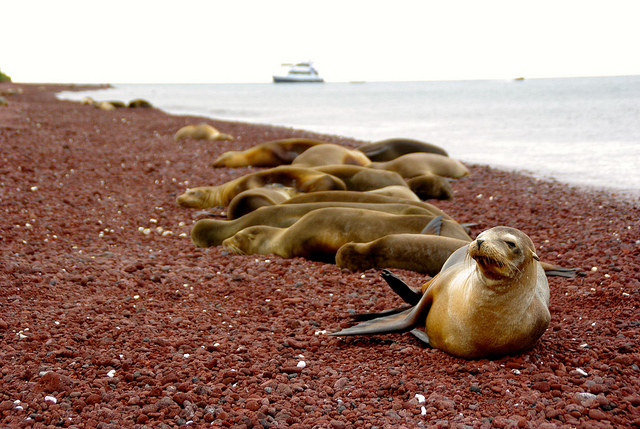 Rabida is a small island and considered to be the Geographic center of Galapagos. One of the first things you will notice is being greeted with dark red sand from the high iron content in the volcanic stones. The island is known for this red sand and its salt water lagoon where you can hopefully spot the elusive Galapagos Flamingo. The hike will take you past yellow warblers, mockingbirds and the brown pelican nesting.

Our favorite Itinerary? Combining both Itinerary A and B and making it a two week adventure of course!

Hopefully you have gotten a quick overview of the Galapagos Islands and this helps you plan for your best Galapagos Itinerary as you explore the archipelago! Email us with any questions.

A New Species of Giant Tortoise Discovered in the Galapagos