We still have four more days of exploring the Galapagos through their photos, videos and stories – we can’t wait to find out how the second half of their Galapagos cruise went! 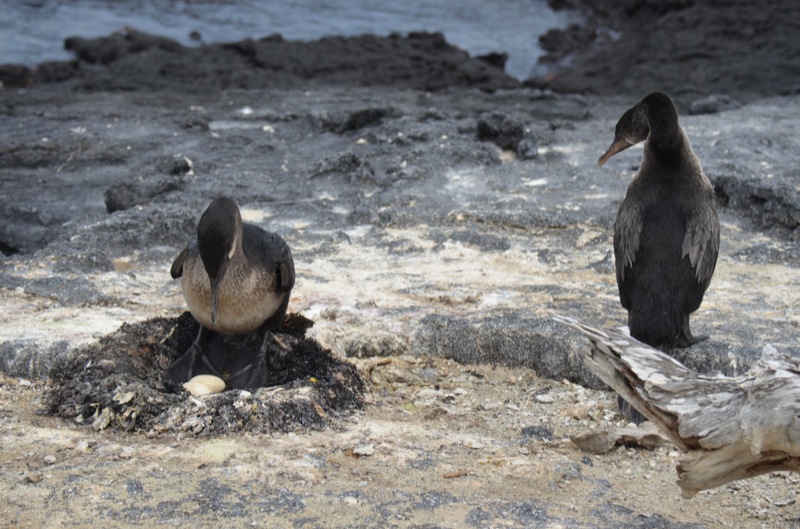 They were welcomed to Fernandina Island with marine iguanas lazing on the lava rocks and swimming in the sea around them.

“We had a dry landing at Punta Espinoza at Fernandina, and we knew it was going to be something special before we even got off the pangas. The water in the bay was filled with marine iguanas. On our previous days’ tours, we had certainly seen marine iguanas here and there, but this was something on a different scale. Their heads were sticking out of the water everywhere.”

Check out their video of a marine iguana swimming, shot from underwater: 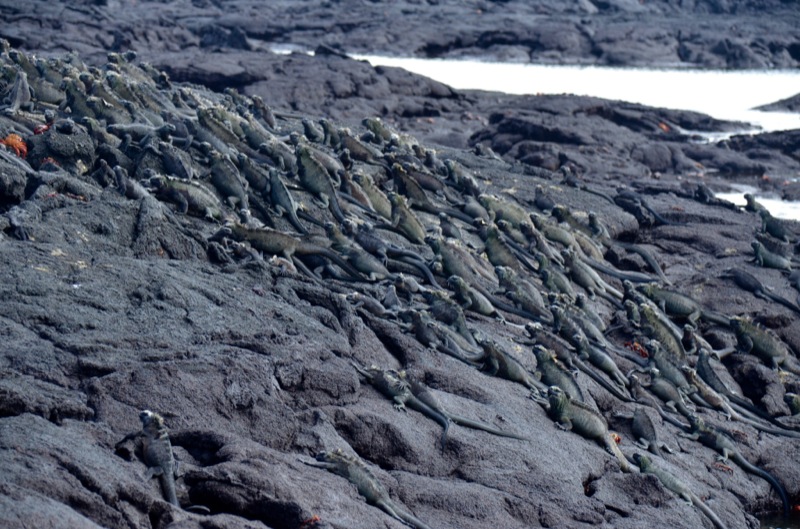 They watched as the sea lions played with the marine iguanas and the crabs cleaned the parasites off the iguanas as they huddled together to keep warm.

“As we stared at this pile of iguanas, every few seconds a spray of white snot would go up. One of them hit the girls with the snot-rocket. I trained my camera on the group and snapped away, hoping to catch one in the act.” 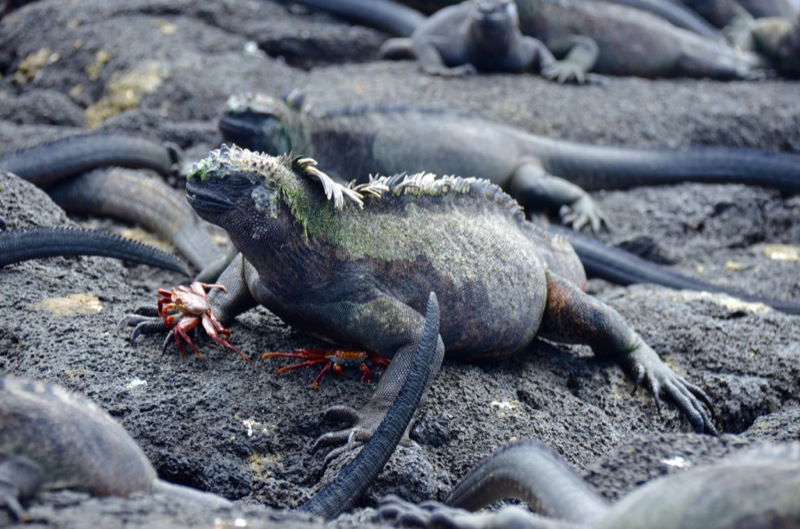 They watched as the flightless cormorant’s nested and incubated their eggs and a Galapagos hawk surveyed the land. They ended the day snorkeling alongside sea turtles.

“This guy turned right toward me, and I was a six-foot violator in a moment’s notice. He went right under me and all I could do was simply be still and let him pass.” 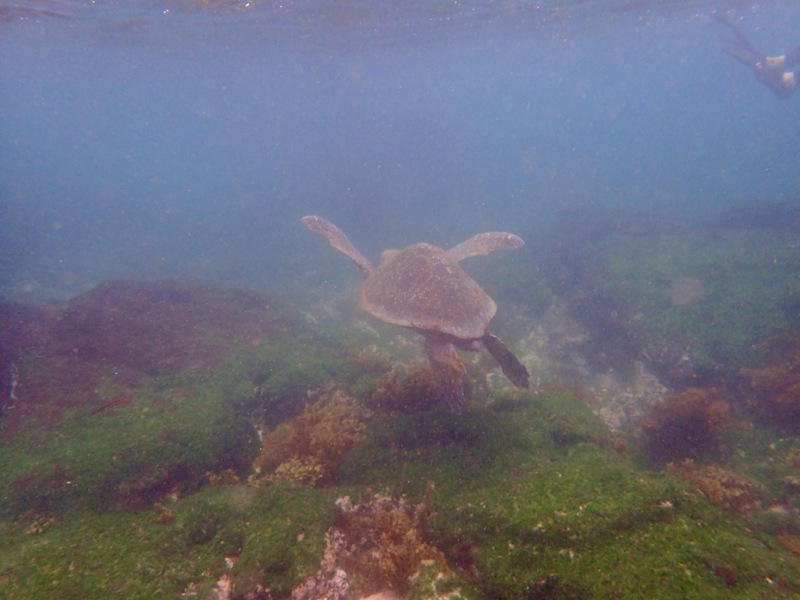 The naturalist guides are there to improve your trip, and Hernan and James are two of our best!

“They clearly shared a great working relationship and a strong bond. Hernan was from San Cristobal and claimed that was the “best” island. James was as strong in his belief that his home island of Santa Cruz was “No. 1.” We were never asked to choose our favorite island or guide, and it would have been impossible.” 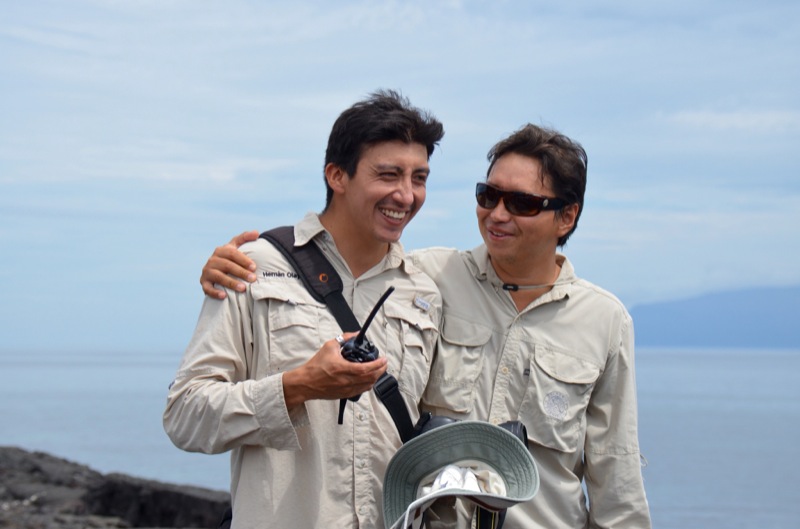 Along the hike today the saw their first glimpse of the Galapagos Tortoise and experienced the great size of this animal. They learned from their guides why these tortoises are one of the few species that fear man in the Galapagos and the work that the government and park have been doing to conserve the species and ecosystem.

“The tortoise is one of the few animals of the Galapagos with a fear of man. Pirates who landed on the islands valued the tortoise as food. They can live up to a year on their backs with no food and water, making them ideal meat for hungry sailors.” 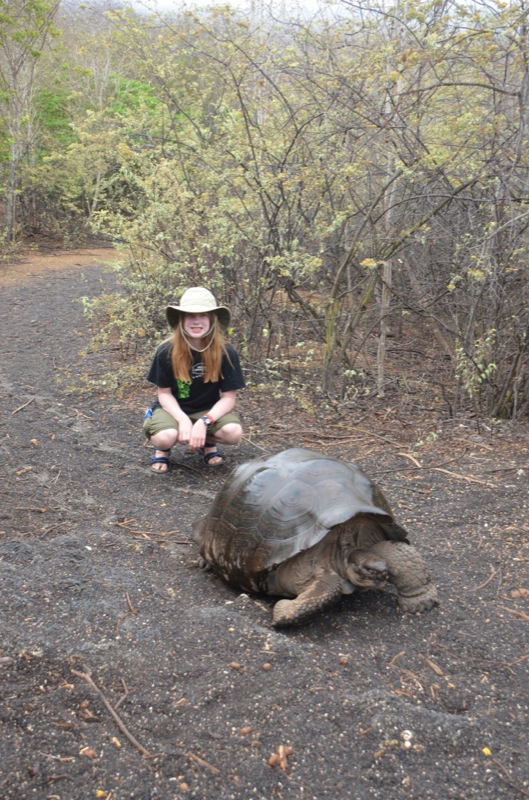 They joked with the guides how the wildlife in the Galapagos almost seems to good to be true, as if the guides would go out every morning and place the animals exactly where they wanted them.

“It was like something out of our science books. Now class, open your books to the chapter titled “prehistoric” and take a look.” 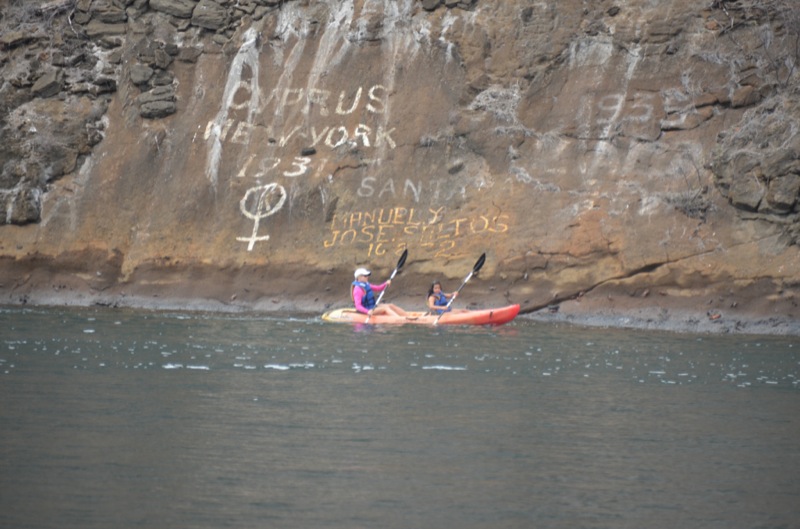 Everyone took their turn jumping off the boat into the water. We love seeing how fearless the kids are and how even some of the parents took their turn! 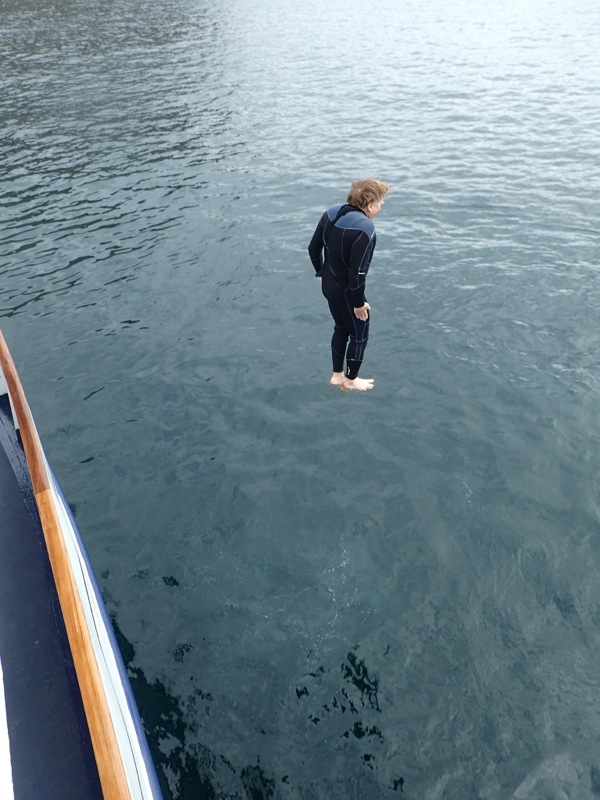 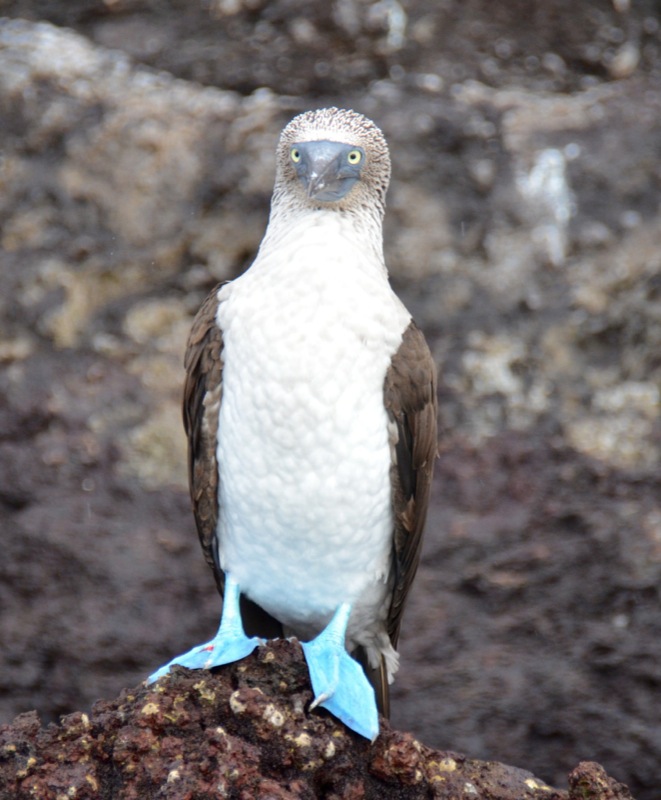 Don’t miss out on their underwater video of a school of Golden Rays swimming by while they were on the panga! 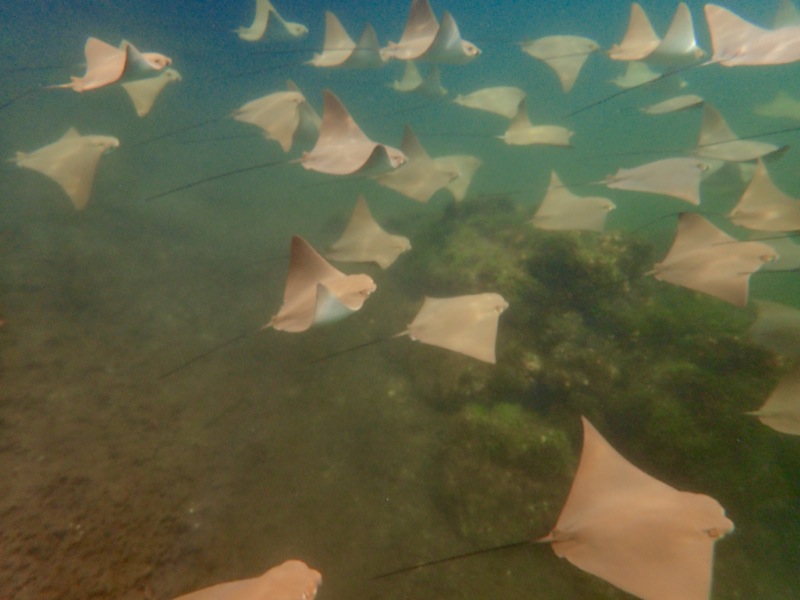 They caught sight of a feeding frenzy, where all the birds were joining together to hunt.

“James told us that they were hunting and churning up the fish and that the birds were hunting cooperatively. There was a school of black-tail mullet below. The penguins were slicing under the water, disrupting the school. The other birds were joining in the fray. There were blue-footed boobies, flightless cormorants, and pelicans by the dozen in the scrum. Even the occasional sea lion swam in the pack.”

Another long and eventful day in the Galapagos! You can tell by their photos that there was something for everyone in their family whether it was the wildlife, the scenery or the history of the Galapagos.

More videos and photos on their blog here

Today they shared their stories through their photos. Image after image of every step of their tour from the morning agenda and panga ride, to the unique wildlife they saw on their hike and snorkeling later in the day. Their underwater photos show off the equally abundant life waiting to be explored. 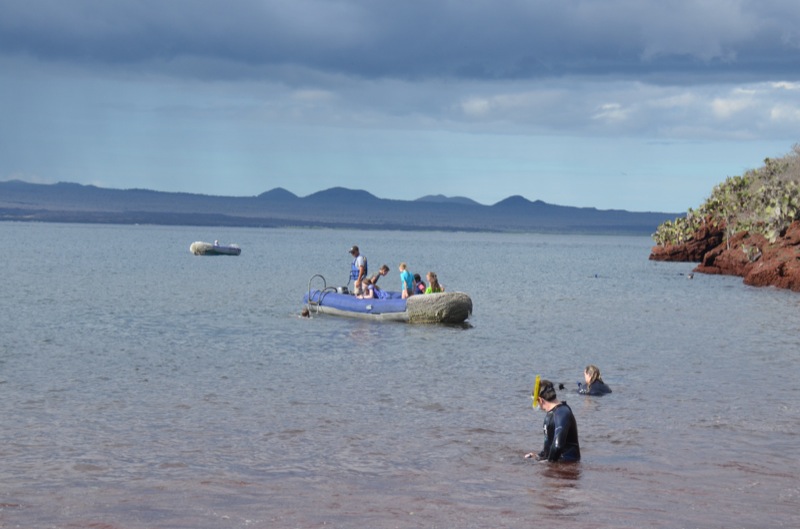 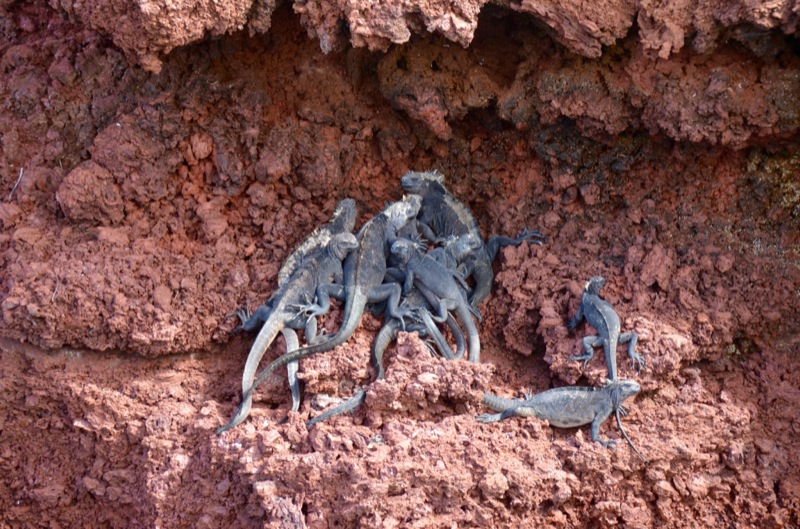 Snorkeling can be exausting, so it’s nice to see when our guests can take a break together on the beach. Especially during our family cruises, kids usually join together and entertain themselves with our guides, so the parents can continue to snorkel and enjoy their vacation. 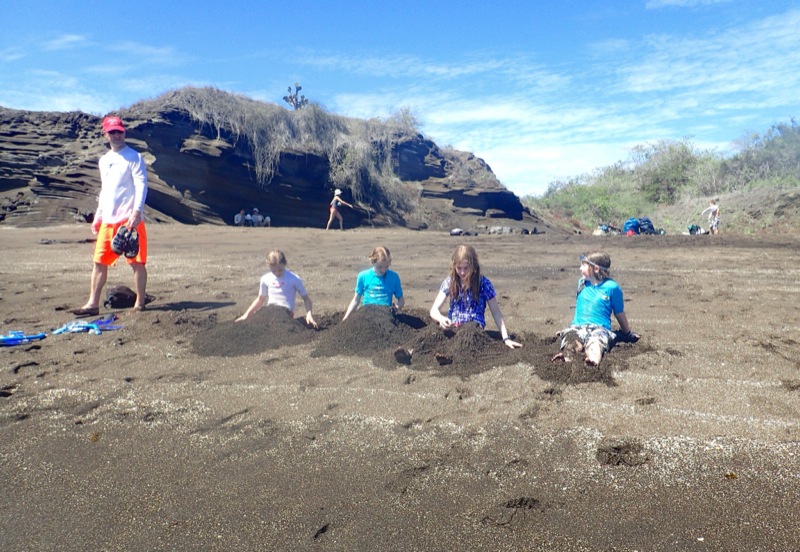 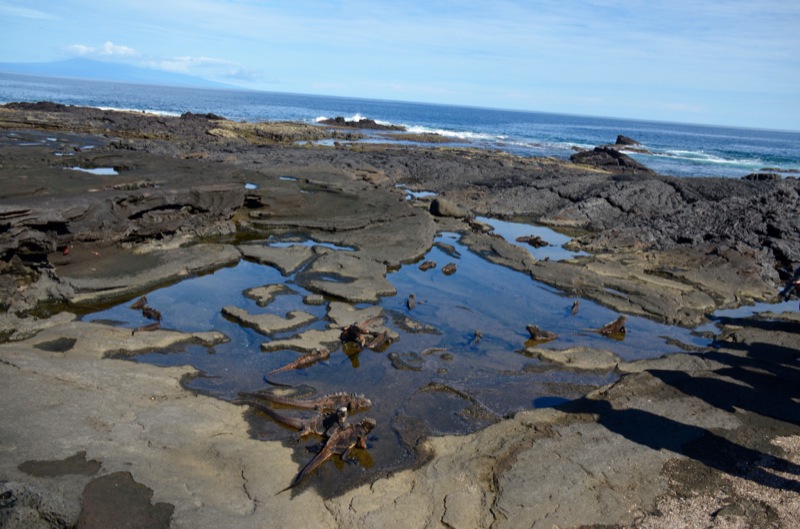 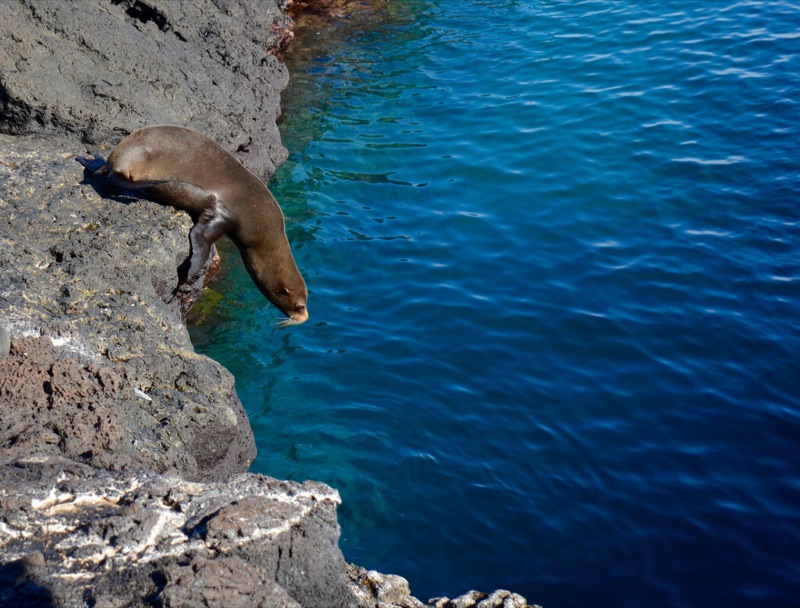 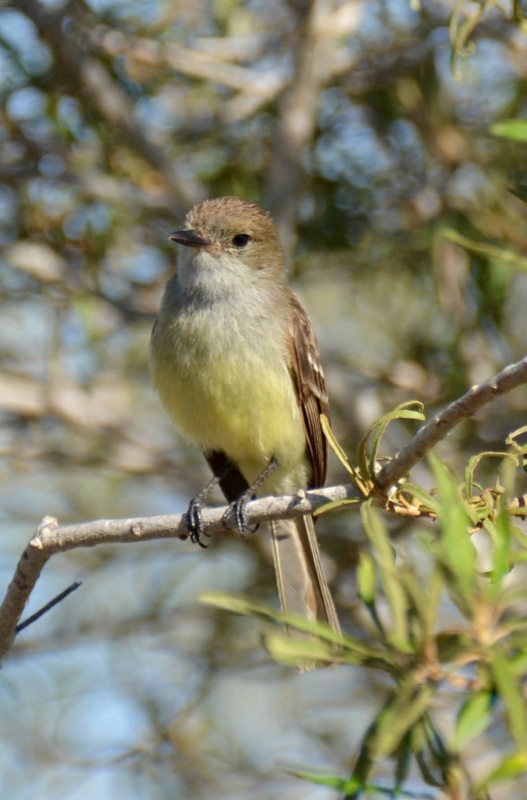 We’ve given you a small snapshot of Rambling Razorback’s photos from the day – head over to their blog and read about their 7th day of photos and stories here.

Final day at Santa Cruz Island and our trip home

A beautiful sunrise is our favorite way to start the day in the Galapagos. Rambling Razorback’s Galapagos cruise has been highlighted by some great photos and stories over the past 7 days and their final day was no less eventful exploring Santa Cruz Island. 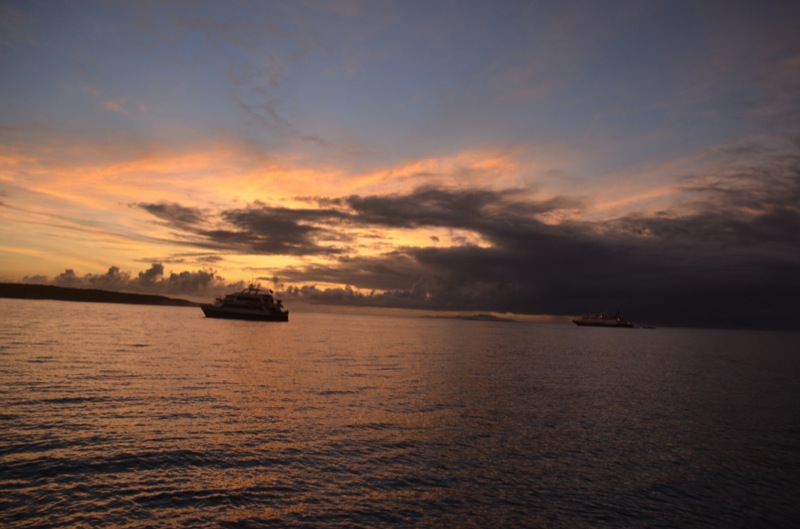 Their final day consisted of throwing the captian overboard, visting El Chato Ranch in the morning and the breeding center in the afternoon. The returned to the Flamingo for their last night and to say their goodbyes to the crew and other guests who they had became close with over the week. 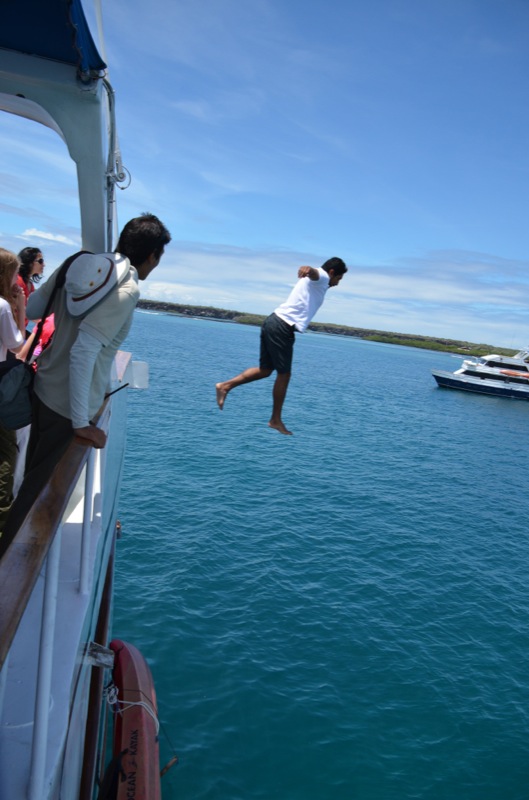 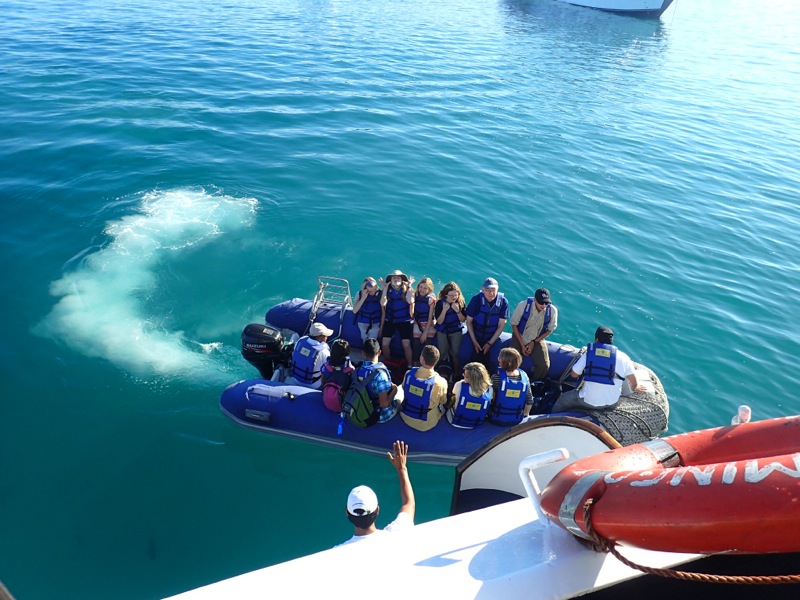 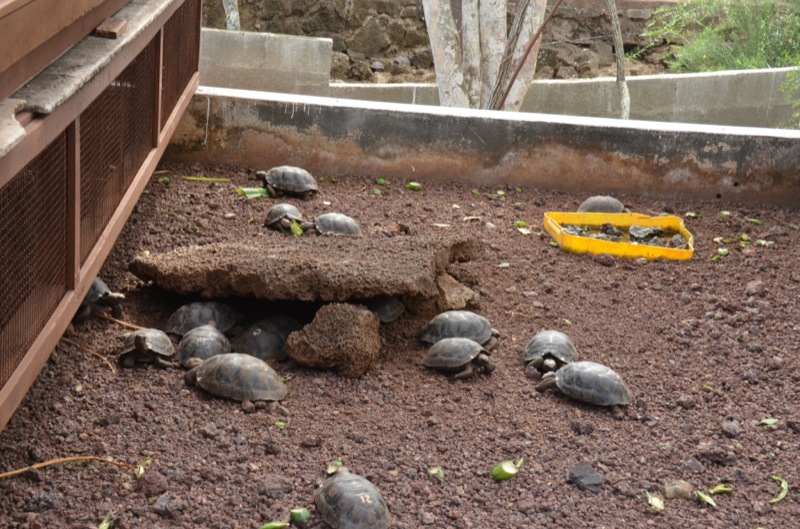 The naturalist guides are there to have fun with you and help point out the wildlife, but they are also there to share the history of the islands and the importance of why we are working so hard to preserve them.

“Both James and Hernan had confessed on separate occasions that when they were kids, they rode on the backs of these creatures. They have photos to prove it. Hernan told us that when he goes to visit his grandparents, they want to get pictures of his young son on a tortoise. He politely declines. The young people of Ecuador are more attuned to the goals of conservation, and such activities are now frowned up. I was reminded of the Maasai people in Tanzania. It used to be a rite of passage for each young man of that tribe to slay a male lion. Times change, and traditions must change as well.” 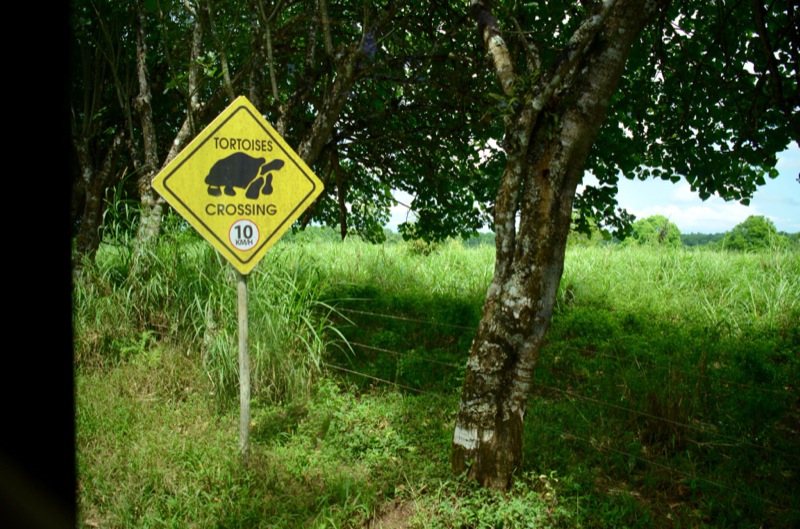 Keep reading their post about their final day in the Galapagos to find out what happens when a male tortoise flips over after mating, go inside a lava tube (cave) and learn a little bit of history on Lonesome George and Pinta Island.

Read the final post of their trip review here.

They share their final thoughts, and we couldn’t agree more:

“I think part of it may have been intentional on my part. As long as I was still writing, researching, editing…a part of me was still there…The Galapagos are the Enchanted Islands, and for a short week, we enjoyed their magic. I do believe we got some “good karma” along the way, and even the night of the rough seas makes for a good story (after the fact)”

We want to thank Rambling Razorback for sharing their stories, photos and memories with us. If you are a past guest and would like to share your stories and photos to help inspire future travelers please reach out to us via our contact page.

Your Guide to Snorkeling in the Galapagos