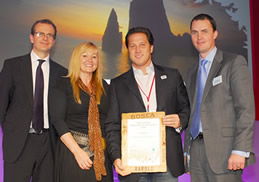 Ecoventura has won in the Best in a Marine Environment category at this year’s Virgin Holidays Responsible Tourism Awards organized by responsibletravel.com. At a ceremony hosted at World Travel Market (WTM), in  London, on Wednesday 12th November, distinguished judges noted that Ecoventura contributes to scholarships for education and helps local women develop micro-businesses. Ecoventura was also recognized to be among the first cruise operators to be independently environmentally audited. The award was presented to Santiago Dunn by Justin Francis, managing director of responsibletravel.com, organizers and founders of the Awards and by Amanda Wills, managing director of Virgin Holidays, headline sponsor of the Awards.

In accepting his award, Dunn stated, “we as a company are both humbled and energized by this prestigious award”. “It is wonderful to be recognized for our past efforts, but our groundbreaking work on setting the bar for responsible tourism in Galapagos has just begun”. Justin Francis, founder of The Responsible Tourism Awards and managing director, responsibletravel.com, organizers of the Awards stated: “In this, the fifth year of the Awards, the bar has been raised for responsible tourism yet again. What inspires me is the efforts that businesses and destinations are making in order to ensure that responsible tourism lies at the heart of their strategies and plans. Without a doubt, this is the only way to plan for the future – responsible travel is not a passing fad or a niche travel trend for marketing purposes. It is an entire, holistic approach to tourism operations.” Amanda Wills, managing director, Virgin Holidays, headline sponsor of the Awards said: “As headline sponsor for a second year,

I have been both moved and inspired by the winners this year. Certainly there is much to learn from them, and it was a privilege to recognize and celebrate their efforts in this arena. It’s in the doing not the saying that we as an industry will make a difference, the winners lead the way.” Launched in 2004, the Awards are run in association with partners World Travel Market, The Daily Telegraph, Geographical Magazine and BBC World News.

To browse the Responsible Tourism Awards magazine, r:travel, see www.responsibletravel.com/rtravel2008 About Ecoventura Ecoventura is dedicated to preserve the ecological integrity of the Galapagos Islands for both its scientific value and economic benefit. Through various initiatives since 1999, including maintaining the SmartVoyager ecological certification, offsetting and reducing carbon emissions through Native Energy and creating the Galapagos Marine Biodiversity Fund (GMBF) administered by the World Wildlife Fund we are able to achieve our goal and at the same time support our claim as a responsible tour operator. [divider]

About The Virgin Holidays Responsible Tourism Awards The Awards are the most prestigious and competitive of their kind in the world and are a collaboration between online travel directory responsibletravel.com, UK media partners The Daily Telegraph, Geographical Magazine & BBC World News and World Travel Market who host the event. Now in their fifth year, the central tenet of the Awards is that all types of tourism – from niche to mainstream – can and should be operated in a way that respects and benefits destinations and local people. This year a record 1,976 nominations were received from travellers around the world voting for tourism ventures that provide outstanding holidays that also benefit local people and destinations.