The holiday season is in full force and our team at Ecoventura is ready to celebrate here in the Galapagos. We invite you to join us on a future holiday cruise and experience how we celebrate our holidays in Ecuador. 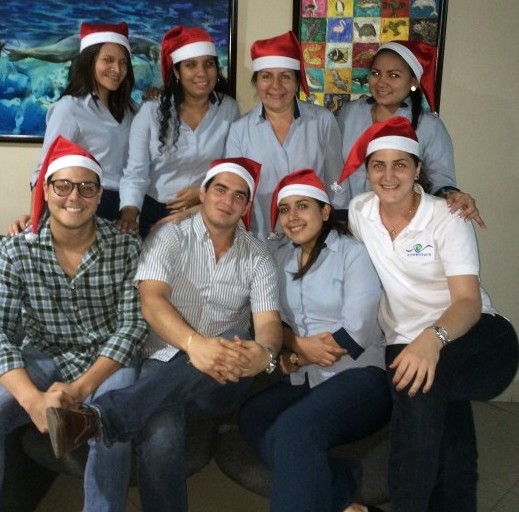 Christmas in the Galapagos

Christmas is an important holiday in Ecuador since it’s a predominantly catholic country. The holiday in the Galapagos always involves family time and a lot of food preparation. As families gather together it’s common to prepare dishes that require more work since there will be more hands to help prepare the meal (and more mouths to feed too!). Together the family will eat a very large dinner on “Noche Buena” or Christmas Eve, and usually spend Christmas day recovering from all of the food!

Pavo horneado: Roasted turkey is a must have for Christmas dinner in Ecuador.

Pernil lojano: Pernil is a roasted pork loin dish where the pork is marinated in a sauce of bitter orange juice, onion, garlic, achiote, cloves, cinnamon, cumin and panela and slow roasted in the oven for several hours.

Canelazo and Naranjillazo: Canelazo is warm spiced cinnamon cocktail made with cinnamon, water, sugar and aguardiente.

Although gifts are exchanged on Christmas, they are traditionally smaller token gifts instead of overly extravagant gifts.

What do you have to look forward to on a Christmas cruise?

Our Christmas cruise departs December 20 – 27th, and the yacht is fully decorated for the holiday with a tree and sparkling lights everywhere you look. Dinner is served that evening with a traditional Ecuadorian Christmas dinner of turkey, pork and all the trimmings.

Bringing your kids? Santa will still find you in the Galapagos! Sometimes the captain will dress as Santa for the kids and hand out small gifts.

Ring in the New Year onboard Ecoventura

Ecuadorians are always up for a party, but New Years is the biggest of them all.

New Year’s celebrations are focused as much on the old year as the new. The holiday is meant to leave last years negativity, failures and problems behind, while looking forward to the new year. On December 31st, “años viejos”(“old years”) are burned after being shown throughout the country.

Anos Viejos are large scarecrow like dummies that are built to represent either someone you don’t like, such as a politician or celebrity, that represents the past year. These dummies are lit on fire at midnight!

They are constructed with paper, sawdust, wood and firecrackers, and sometimes stuffed with a list of past worries and problems which are burned along with the old year. Even if you can’t find a new years eve party to attend, this tradition makes for quite a sight to watch between 11:30 and midnight. 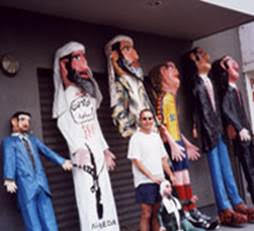 For example, the stuffed dummies in the picture on your left characterize Osama Bin Laden. But other local, international politicians and famous personalities are also characterized representing the old year.

Another tradition you will come across on New years is children and women (or men dressed as women) dress in black and play the old year’s “widow” role, crying and asking for some money or candies in the streets.

One of the most popular traditions in Ecuador is the eating of 12 grapes at midnight which is said to bring good luck in the coming year.

These traditions take place everywhere in Ecuador, but the most exciting place to see New Year’s Eve traditions come alive in Ecuador is Salinas, a beach town resort area close to Guayaquil.

Celebrating onboard with us?

If you are adventuring on an Ecoventura yacht over New Years be ready to celebrate! When boarding you will be greeted with party hats, noise makers and a champagne toast to set the mood for the week. This years new years cruise departs December 27 – January 3rd, we hope to celebrate with you on future New Years cruises!

Ecoventura's End of Year Media Round up