Exciting news from the Galapagos that is evolution in the making! 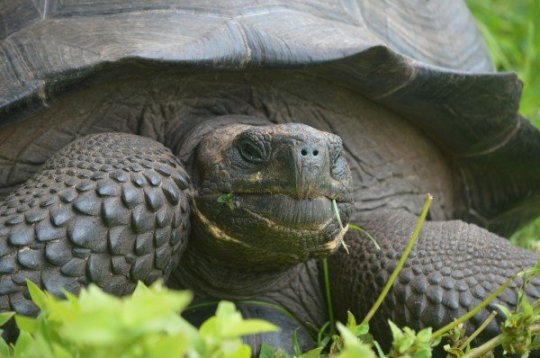 Giant Tortoises have been one of the most devastated species in the Galapagos Islands. In 1959 the Galapagos National Park Service and the Charles Darwin Foundation were set up to monitor and restore the tortoise population on the islands. They have been listed as endangered and protected since 1970. Thanks to conservation efforts, it is now estimated that 20,000 – 25,000 wild tortoises live in the Galapagos islands today.

It has been assumed that the two tortoise populations on Santa Cruz were of the same species. Recently, Dr. Gesella Caconne, along with a group of researchers, did genetic testing on about 100 tortoises that confirmed their suspicions, there are two distinct species of giant tortoises on Santa Cruz.  Genetically, the new population of tortoise on Santa Cruz have more in common with tortoises from other islands vs. the western population with whom they share the island.

This new tortoise was named after Don Fausto, a park ranger for the Galapagos National Park for 43 years. He has dedicated his life to giant tortoise conservation as the main caretaker at the Tortoise Breeding and Rearing Center and specifically served as Lonesome George’s long-term caretaker.

Dr Caccone discusses the importance of these new findings, ” The naming of this new species will increase efforts to protect and restore the Eastern Santa Cruz Tortoise” “its low numbers, limited geographic range, and reduced genetic diversity make it vulnerable. As a newly recognized species, it will now receive the attention needed to ensure its survival” The western Santa Cruz population has about 2,000 members, while the eastern species has only about 250 tortoises. This eastern species might receive extra habitat protection in hopes of increasing these numbers.

To stay updated on new findings about this new species of Galapagos Tortoise sign up for our newsletter below!

How to Pick the Best Galapagos Itinerary: Island Overview

Please No Touching the Galapagos Wildlife!